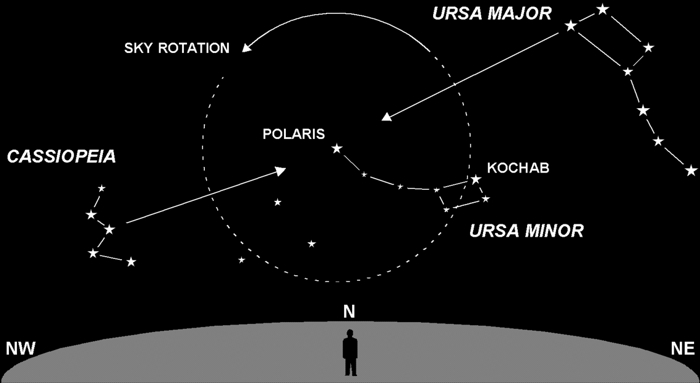 Locating Polaris (a.k.a. the North Star) is easy. Step 1 is to lose the popular misconception that it’s the brightest star in the sky — which it isn’t by a long shot. Fortunately, it is the brightest star in the general area where you’ll be  looking. Step 2 is to find either Ursa Major (a.k.a. the Big Dipper) or Cassiopeia (a.k.a. the Big W), at least one of which is visible on any clear night. A line drawn from the end of the Dipper’s bowl, and the center-line of the W, both point approximately at Polaris.

You can always see at least one of these two constellations because they, and all the other stars in the sky, appear to rotate in unison around Polaris. This rotation carries each of them below the horizon at times, but when one is below, the other is high up and more easily seen. The rotation rate is almost exactly 15°/hour, half the speed of the hour hand on your clock. Hmmm … could there be some connection here?

Ursa Minor (a.k.a. the Little Dipper) is attached to Polaris but, except for Kochab, is comprised of extremely faint stars. Look for it only on a clear, dark, moonless night. Even then, unless it’s high up in its cycle around Polaris, it will still be difficult to discern.