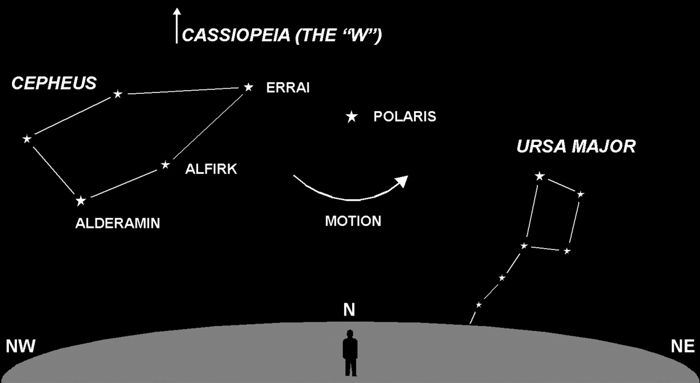 Cepheus (see’-fee-us) is a dim constellation named for the mythological king of Æthiopia (not our present-day Ethiopia). Cassiopeia was his queen.

Like Cassiopeia and Ursa Major, Cepheus is one of the circumpolar constellations that appear to revolve around the north star Polaris. Of course, this apparent revolution is due to Earth’s rotation. If you come back out to observe an hour from now, you’ll see Cepheus and Cassiopeia lower in the sky, and Ursa Major higher. After 24 hours they will all be back to about the same place.

You may have heard about astronomers discovering some new planets around other stars. One of those stars is Errai, in Cepheus, which is actually a double star. You can’t see the partner star without a telescope, and you can’t see the planet at all, but we know it’s there because Errai wobbles slightly as the planet goes around it. The planet is almost twice the mass of our own Jupiter. That means it is likely a gas giant and not habitable. Still, it is remarkable in that most astronomers believed it was not possible to have planets orbiting double stars due to their competing gravity. Imagine the daytime view from such a planet with two suns. And imagine enjoying a “double sunset.”