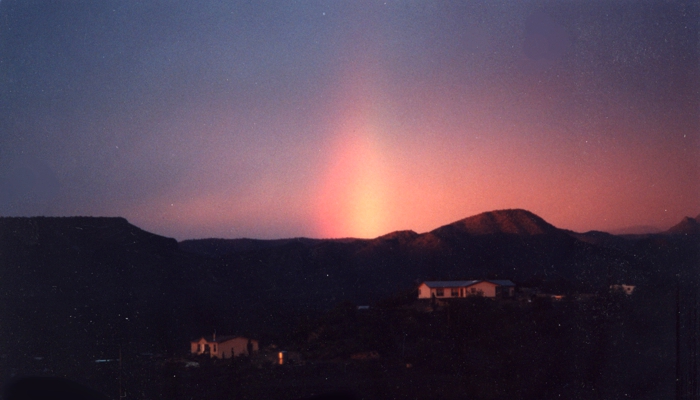 Question: I was going through a box of old photos and discovered this. It was an unlabeled print so I’m not sure of the date & time, and I don’t know the camera settings, but it was taken with my Minolta XG-7 using an 80-200 mm Tamron lens. It was “probably” taken in the summer shortly after sunset. The view is to the north from your east yard. The pillar of light was static, with no movement or variation. It persisted for some time before dimming out. Any ideas about what this was? — Roger Serrato, Montrose, CO.

Answer: I have some ideas but nothing I can confidently conclude based on the limited data. My first impression was this a Sun Pillar, but when I read the view was to the north that didn’t make sense. Nor could it be a common light pillar since it was summer and the requisite ice crystals couldn’t form.

Roger is a good friend who spent a lot of time here at Heimhenge. He’s been an astronomer and photographer for a long time. We had an extended exchange about possible explanations for this apparition. None were entirely satisfactory. Here’s what we looked at in our investigation …

First thing I wanted to know was what’s beyond that ridge where the pillar of light appears? Google Earth provided the answer. It allowed me to match the horizon in the photo with the exact horizon direction as seen from my east yard. Note the right edge of the mesa, and the smaller hill to the right: 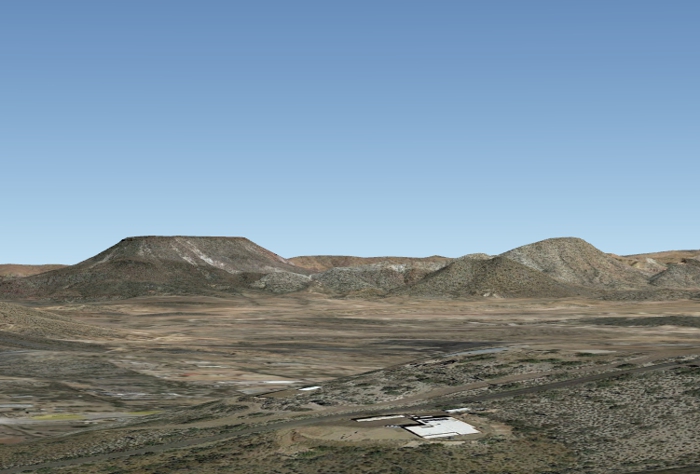 Then by “flying” with Google Earth I was able to see over that ridge and discover what was behind. I was hoping to find a possible source for that beam of light. This is what I found: 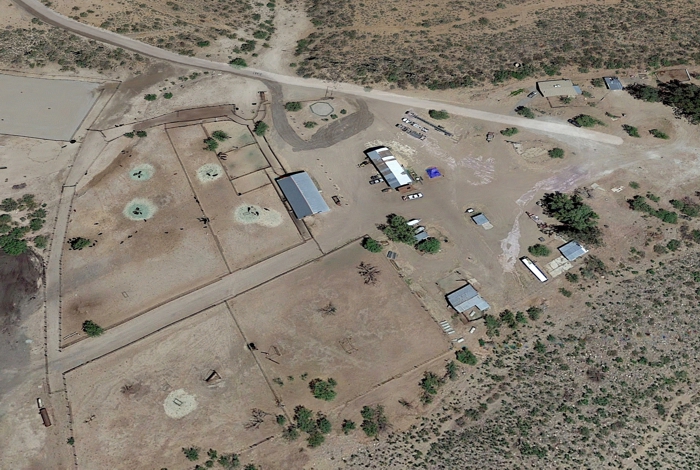 That is a cattle feedlot. The green circles are where straw has been spread, and the black objects in those areas are cattle. There certainly must be some outside lighting for this operation, but nothing obvious that could produce a vertically focused beam of light. At this point my best guess was that the photo showed a diffuse beam of light made visible by dust or smoke particles in the air, similar to how one can see searchlight or lighthouse beam from the side. The light is scattered by a process called the Tyndall Effect.

I considered that maybe the light source was a large bonfire, since the reddish glow could be seen over a wide distance, and the light from the flames would reflect from the smoke. The yellow light could be from the hotter central part of the bonfire, but the light from a bonfire is not “static, with no movement or variation.”

So, as done previously when stumped, I decided to seek the assistance of a professional meteorologist. NWS makes that easy to do at https://www.weather.gov/contact, and they are always prompt and helpful. So I sent them a copy of Roger’s photo and explained what we knew and didn’t know. Here’s the reply I received from Jaret Rogers at the NOAA:

Thanks for sharing that! It’s an interesting photo and a little difficult to say what it is with any certainty. I agree that it looks similar to a sun pillar type phenomenon, where there’s a source of light closer to the ground. As you mentioned, you typically need ice crystals in the atmosphere to produce this. It’s possible there could be a thin and nearly invisible cirrus layer present, and that this may be more of an optical illusion along the horizon where the light source is actually beyond the horizon, but it’s too difficult to tell from a still image. I wish I could be of more help, but I’m afraid it will remain speculation of what the cause is without more details.

I’m not too sure about the ice crystals since, as Roger recalled, the photo was taken in the summer. But Jaret’s suggestion that it could be an optical illusion from ice crystals higher up in the atmosphere is intriguing. The view to the north from here is “high country” with elevations up to 7000 ft. And Roger recalls there was a wildfire burning “around that time” near Black Canyon City — about 15 miles north of here.

Roger further observed: I used a magnifying glass on the close-up shot and saw sunlight reflecting off the west side of both homes and the water tank in the nearest house. That may or may not be true, but I can’t think of a way to connect the setting Sun to that yellow beam of light.

Sometimes you can throw all the science you want at a puzzle and get little in return. Part of the problem here is the age of the photo and the uncertainty around time and date. I invite readers to suggest their own thoughts about what this beam of light really is. Use the handy comment section below. Thanks.