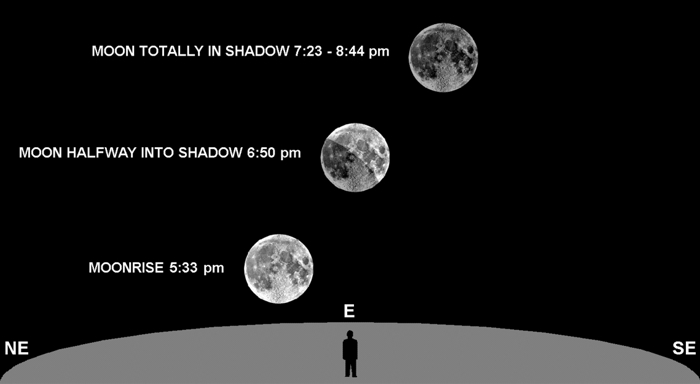 Early next Wednesday night, October 27th, the Moon will pass through Earth’s shadow in an event known as a total lunar eclipse.  On average, from any given location, you can see one of these events about every two years.  If the sky is clear you’ll have a great view using nothing but your eyes. No telescope required!

The Moon will rise in the East around 5:30 pm, already inside the penumbra, the less dark periphery of Earth’s shadow.  Normally, the Moon is fully illuminated by the Sun, even after the Sun has set from our horizon.  But when the Moon is in the penumbra, part of the Sun is blocked by the Earth so the Moon appears less bright.  When you look for this effect you’ll notice it easily.

Around 6:15 pm the Moon will enter the darker part of the shadow — the umbra.  In this region all of the Sun is blocked by the Earth.  The Moon will be totally in the umbra by 7:23 pm, at which time it will look very dark and reddish for about an hour.  At 9:54 pm it will emerge from the shadow.

The reddish color is caused by sunlight scattered into the shadow by Earth’s atmosphere.  The specific shade and depth of color is determined by the extent of cloud cover around our planet.