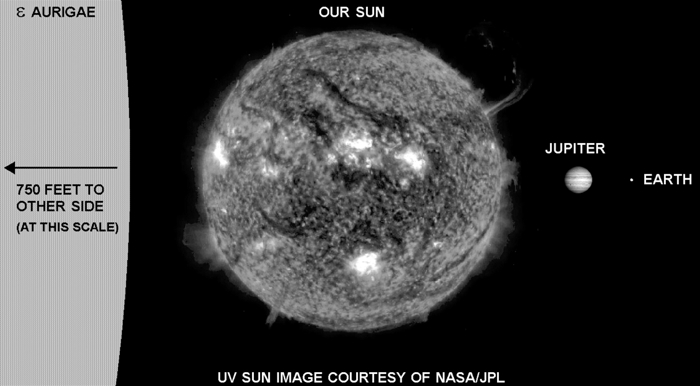 Question: What the heck is the difference between a star and a planet? To me, they all just look like tiny points of light in the sky. — GB, Washington, DC

But that was the easy answer. The more you study astronomy, and the often bizarre denizens of the cosmos, the more confusing these definitions become. Ponder  these  amazing  facts …

Some stars orbit other stars. Some lone planets wander the depths of space untethered to stars. There is no known upper limit to the size of solid, Earth-like planets. There are stars smaller than the Earth; they no longer burn with fusion, but are still hot enough to keep glowing for millions of years. Although there are no known examples, it would be possible for a small star to orbit a large planet. The largest known star, epsilon (ε) Aurigae, is almost 2000 times larger than our Sun. If a gas planet (like Jupiter) gets much bigger than 10 times the size of Jupiter, pressure at its core will ignite nuclear fusion and it will become a star. In that case, any moons it had would be promoted to the technical status of planets.

The Elusive Little Dipper
Test Your Eyesight on Alcor
HOME