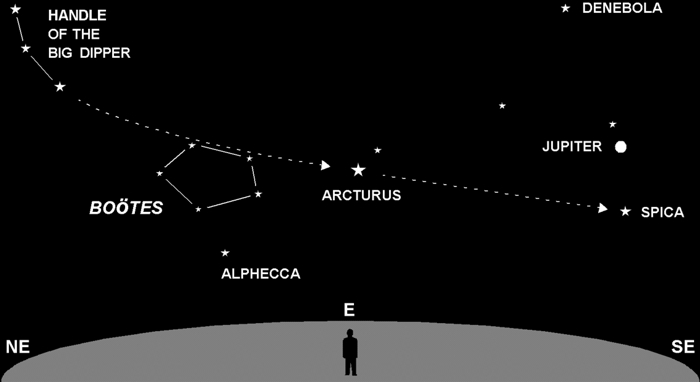 Arc to Arcturus, speed to Spica. That’s the mnemonic stargazers use to help them locate two of the most prominent stars in the sky, Arcturus and Spica.

Start at the Big Dipper’s handle, follow the arc of the handle to the next bright star, Arcturus, then continue in a speedy straight line to Spica. As you move along the arc you’ll skim just above the constellation Boötes (bow-oo-teez) with its five primary stars forming an easily recognized pentagon shape.

Arcturus is remarkable for many reasons. It is a huge orange-colored star, 25 times the size of our Sun and relatively close — a mere 40 light years. It is also the 3rd brightest star in our sky. Its intense light, shining on a solar cell, was used to trigger the grand opening of the Chicago World’s Fair way back in 1934.

Spica ranks 13th brightest. It is a blue-white star five times the size of our Sun and about 190 light-years distant.  When it’s low in the sky during April, check it out with binoculars. Atmospheric distortion of its light causes it to sparkle with all the colors of the rainbow.

Just above Spica is Jupiter, king of the planets. We’ll have more to say about the king in next week’s column.

How to Find the North Star
Q&A: Jupiter Getting Brighter
HOME