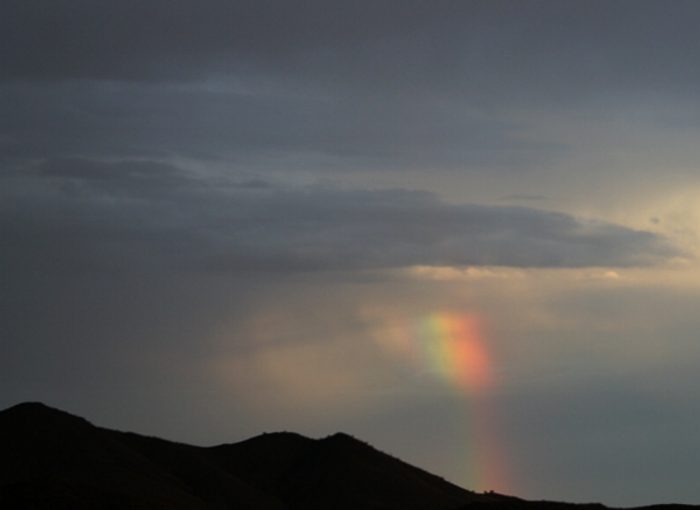 Question: We had a thunderstorm yesterday. When it stopped raining I went outside and there was this bright rainbow perfectly centered over a mountain. I ran to grab my camera, and when I returned the rainbow was still there but it was shifted to the right. I didn’t know rainbows could move. It was still coming from the same rain cloud. Is that normal? — RS, Colorado Outback

Answer: It’s absolutely normal. All rainbows move slowly across the sky, but you won’t notice it unless you watch for 5–10 minutes. It helps to have landmarks along the horizon to gauge the motion. This video shows a (partial) rainbow rising and drifting south (right) as the Sun was setting and drifting north. The motion would be reversed at sunrise, or in the Southern Hemisphere.

Rainbows are created from sunlight, and the Sun moves across the sky with a speed of approximately 15°/hr. That works out to 0.25°/min or, in more easily-visualized terms, half a Full Moon diameter per minute. The center of the rainbow, which is always located at the antisolar point, thus moves with the same speed. The graphic shows a setting Sun and rising rainbow: 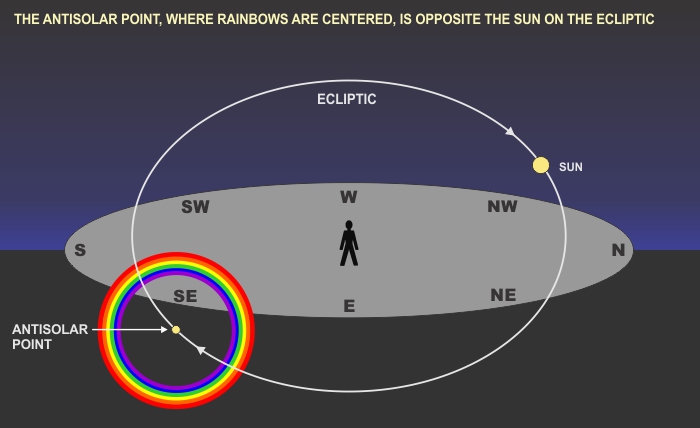 If you want to learn more about why rainbows are always centered on the antisolar point, read my May 25, 2015 post about Circular Rainbows.

Of note: Since all rainbows have a diameter of 84°, they’ll be entirely below the horizon when the Sun is more than 42° above the horizon. That means rainbows can only be seen (on average) for 2.8 hr after sunrise, or 2.8 hrs before sunset. The only way you can get a rainbow outside those times is in a spray of water around the antisolar point — think waterfall or garden hose.

When you see a rainbow you’ll need to give it more than a cursory glance to detect its motion. Its speed is half that of the hour hand on a clock. My time-lapse video records about 12 minutes of motion (speedup factor 90X). To my eyes that motion was just barely perceptible. It helped having those foreground hills as a reference frame.

So yes, it’s totally normal for rainbows to move. And it really aggravates the Leprechauns.  🙂