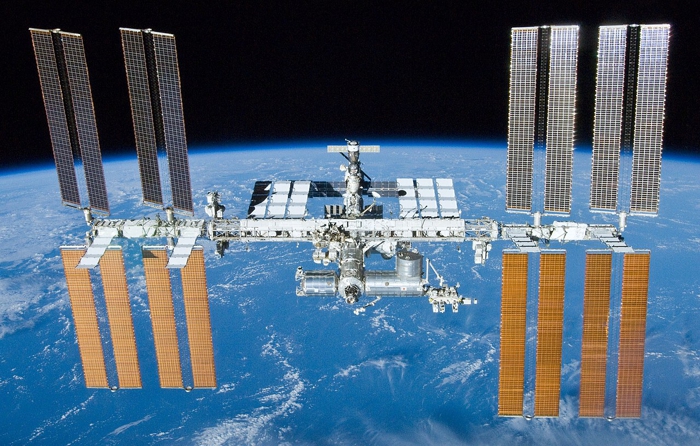 Question: I heard there was an air leak on the International Space Station. If NASA can’t find the leak, how long do they have before the astronauts run out of air? — MT, Houston, TX

Answer: If backup systems work as planned they’ll never run out of air. But I sense you’re asking about a “worst case scenario” where they have a finite amount of air onboard and the leak can’t be found. I’ll get to that scenario later, but first, let’s take a look at what would have to happen to get us there.

When a leak is detected by onboard atmospheric pressure sensors the astronauts are alerted and immediately begin this protocol:

1. Airlocks to all the station modules are closed one at a time until the pressure stabilizes. This identifies the module that contains the leak.

2. Astronauts then use an ultrasonic leak detector to scan the module bulkhead and listen for the “hiss” of escaping air. This is sometimes difficult in noisier environments, but it’s always worked on previous leaks. The holes are difficult to detect visually — they’re caused by impacting micrometeorites or fragments of space debris, and are generally only 1–3 mm in size.

3. Finally, they use a special epoxy mix to reseal the hull. The hull consists of several layers of materials, and the epoxy is engineered to adhere to all of them. If the hole is in one of the borosilicate glass windows a different epoxy is used.

4. Depending on the size of the hole other remedies may be needed. For holes too large to epoxy, metal plates with gaskets can be attached. Welding inside the ISS is possible but it’s dangerous and used only as a last resort.

Steps 1–3 have sufficed for every leak to date on the ISS. But what if they can’t find the leak? Here’s the backup systems and protocols:

In a really worst case scenario, where the Soyuz escape craft are damaged or inoperable, could anything be done? Could rockets be launched to the ISS and evacuate the full crew (nominally 6 astronauts)? Alas, at present, there are no dedicated “rescue rockets” on the ready. There are four entities that could, if needed, mount such an attempt: NASA, SpaceX, Russia, and China. But it would, at best, take weeks to months. For more details, see this discussion on Space StackExchange.

So let’s assume all of the above fail. This brings us to the original question: Failing all backup plans, how long would it take for the astronauts to run out of air? To put the volume of air to scale, the following graphic shows a single astronaut inside a cube with the same interior volume as the ISS. The size of the leak is exaggerated for clarity. 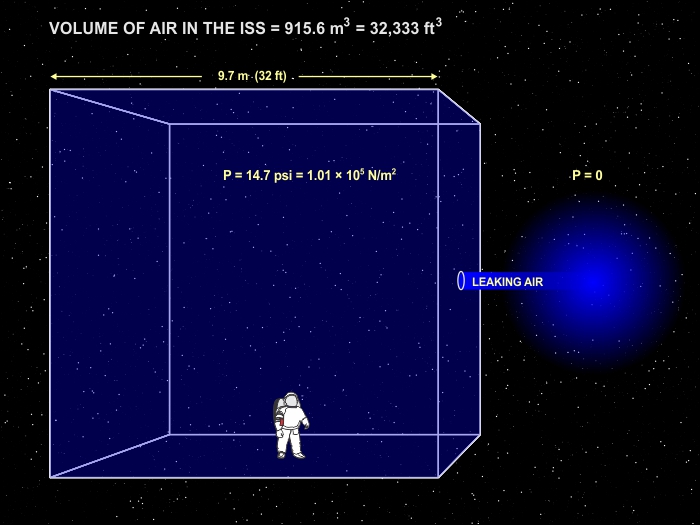 Normal air pressure on the ISS is 14.7 psi (1013 mbar), the same as sea level on Earth. The current air leak is 0.02 psi (1.4 mbar) every eight hours. Although the rate of loss from a continued leak would not be exactly linear, we can extrapolate the time it would take for conditions to become life-threatening.

Note: The average human can survive at less than 14.7 psi — Commercial airliners typically pressurize their cabins to 12 psi, equivalent to an altitude of 8000 ft. Experienced mountain climbers are comfortable at 15,000 ft in an atmospheric pressure of 8.5 psi. Himalayan Sherpas do just fine at 5 psi. Astronauts are fairly healthy physical specimens, so we’ll use 8.0 psi for our calculations:

Of course, that’s just for the current air leak. Larger punctures would lose pressure more rapidly. Fortunately, orbital debris larger than 2 cm can now be tracked by radar and the ISS can be maneuvered by thrusters to avoid an impact.

But the consequences of even a 2 cm hole would be disastrous. Based on its leak rate, the current hole is expected to be around 2 mm in diameter. A 2 cm hole has an area (2.0/0.2)2 = 100 times larger. That means 100 times the leak rate, and that would reduce survival time from 112 days to around 27 hours. But a hole that size wouldn’t take long to find.

If you want to learn more about the damage that can be caused by larger impactors, see my August 7, 2015 post: Q&A: What Happens When a Meteor Hits the ISS