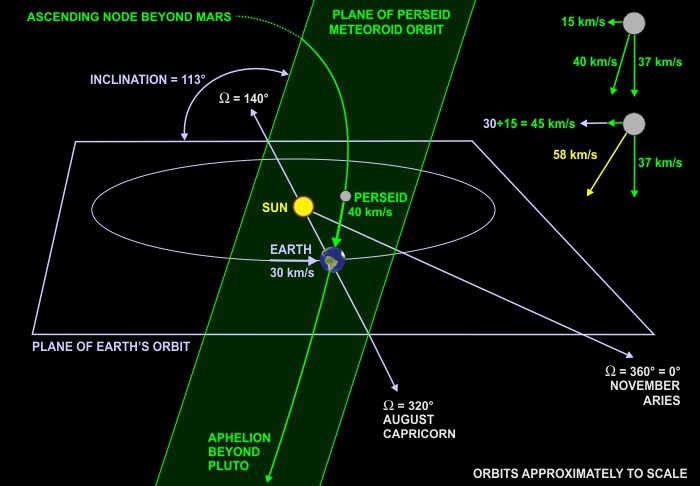 Today’s investigation was prompted by a question from Loïc Albert, JWST/NIRISS Instrument Scientist at the Université de Montréal (UdeM). He questioned my description of the Earth as “running into the Perseid meteors” as opposed to “the meteors running into the Earth” (see my August 10, 2015 post).

And he makes an excellent point. The graphic in my 2015 post does not accurately show the orbit of the Perseid debris stream. It shows the orbit inclined at a small angle to the plane of Earth’s orbit. The graphic in this post shows the actual 113° inclination. This is needed to address Albert’s comment.

Earth moves around its orbit with a nearly-constant speed of 30 km/s. The Perseid debris stream reaches a top speed of 43 km/s at perihelion (just inside Earth’s orbit at 0.95 AU), but slows to around 40 km/s by the time it reaches Earth’s orbit (at 1 AU).

The debris approaches Earth on a 113° vector, so we can split that 40 km/s velocity into two components: one oriented toward Earth, and the other perpendicular to Earth’s motion, as follows:

[Note: That negative sign on the angle is required because the Perseids are on a retrograde orbit. The default direction of motion in the solar system is “counterclockwise with north up”. So with an orbital inclination greater than 90°, the Perseids are orbiting “backwards”.]

To get the total Perseid approach speed (relative to Earth) we first need to add Earth’s 30 km/s speed to the component of Perseid speed in the plane of Earth’s orbit: 15 km/s + 30 km/s = 45 km/s. When we combine this component with the perpendicular component we get a resultant speed of:

So as Albert suggested, the Perseid debris stream contributes significantly to the collision speed during a meteor shower. A more accurate description would be “Earth and the Perseids run into each other.”

The Perseid meteors are clocked at an average speed of 60 km/s. Meteor speeds can be measured with both Doppler radar and video triangulation. But we calculated a speed of 58 km/s. Whence the extra 2 km/s? After puzzling over that for some time I eventually reached out to the experts at Ask An Astronomer, hosted by UC Santa Cruz. With the help of Brian DiGiorgio, PhD student of Astronomy & Astrophysics, we found the explanation.

The full analysis is based on the 3D geometry shown in the graphic, and the fact that the sum of a meteor’s gravitational potential energy and kinetic energy is a constant. Long story short: Whatever the Perseid’s incoming speed, the pull of Earth’s gravity will increase that speed. DiGiorgio’s calculation showed this could account for around 1 km/s of the missing 2 km/s.

The other 1 km/s comes from a vector omitted in the 3D graphic and 2D analysis. An incoming Perseid has most of its velocity perpendicular to the 2D plane of Earth’s orbit. But there is a slight radial component in the direction away from the Sun. Again, the calculation is complex, but that radial component adds the remaining 1 km/s.

Meteors in other showers arrive at speeds dependent on their perihelion speed and the inclination of their orbital plane. Those with low inclination angles, like the Taurids at 6°, catch up to Earth from behind and enter our atmosphere with slower speeds around 30 km/s. By contrast, the Leonid meteors orbit in a plane inclined at 163° and come at us nearly head-on with speeds that average 71 km/s.

Next Week in Sky Lights ⇒ Air Leak on the Space Station