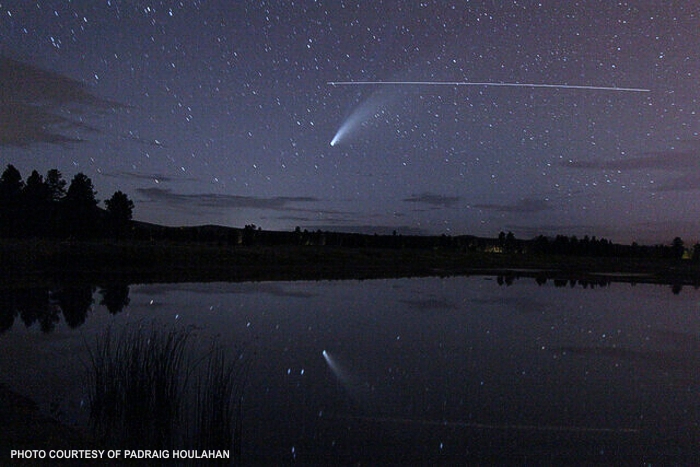 This striking photo of the ISS transiting comet NEOWISE’s tail was captured shortly after sunset on Friday, July 17. The photographer is Padraig Houlahan, fellow Arizonan and amateur astronomer. The site was in the wetlands south of Flagstaff, AZ at an elevation near 2000 meters (7000 ft). I saw several interesting astronomical phenomena in this wide-angle panorama and wanted to share my observations with readers. Thanks to Padraig for allowing me to post his photo.

I wanted you to enjoy his original photo before I cluttered it up with annotations. That done, the following composite points out other features of scientific interest: 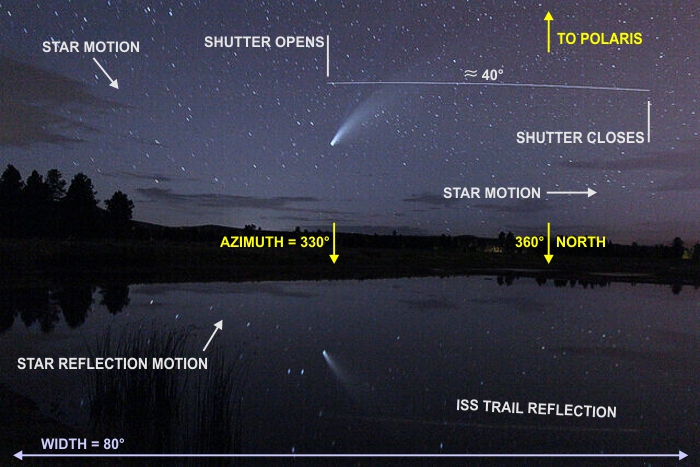 Star Trails: As most readers already know, Earth’s rotation makes the night sky appear to revolve in a counter-clockwise direction around Polaris, aka the “North Star.” That’s why stars leave trails during long exposures. The farther south from Polaris a star is located (up to the celestial equator), the larger the circle it has to complete in 24 hours, and the longer a trail it will make.

Polaris is about 5° above the top of the photo in the direction indicated. Star trails are shorter near Polaris, but stars near the horizon are leaving barely-visible counter-clockwise trails (left-to-right in this part of the sky).

Wide-Angle Lens Effect: The 20mm focal length used for this photo captures an angular width of 80° and an angular height of 60°. Wide-angle photos exhibit barrel distortion — distances near the edges are compressed compared to the center. Padraig minimized visible distortion by centering the distant shoreline vertically in the frame. Had he framed the shoreline at the bottom, it would have appeared to curve upward slightly near the edges. And he would have missed those beautiful reflections.

ISS Trail: The trail begins when the camera shutter opens and ends when it closes. The ISS is reflecting sunlight, still available at its altitude of 400 km (250 miles), and paints a trail around 40° long. The ISS serendipitously cuts across the comet’s tail during this 79 second exposure. The comet itself was in the far background, around 100 million kilometers (64 million miles) from Earth on July 17.

Comet NEOWISE: Discovered by NASA’s Near-Earth Object Wide-field Infrared Survey Explorer, the comet displays some 20° of tail. At its distance that translates to 350 million kilometers (220 million miles) of length. NEOWISE has a very long elliptical orbit extending 8–9 times the distance to Pluto, and it won’t be back for over 6000 years.

There’s science in any photo if you take the time to look for it. Sometimes it’s subtle, like the direction of a shadow. With astrophotos the science is usually more obvious. One should appreciate a photo for it’s content and composition, of course. But, if you look for the science, you’ll often find the photo has other stories to tell.

Next Week in Sky Lights ⇒ How Bicycle Reflectors Work