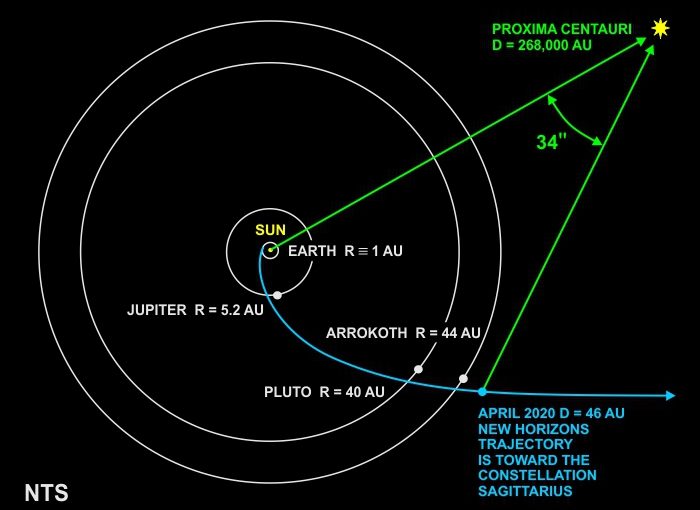 As you alternate between the two images in the slideshow, you are effectively jumping between Earth and the New Horizons spacecraft now located far beyond Pluto. The alternate views are what you would see if your eyes were spaced billions of miles apart.

When gazing at the night sky it’s easy to forget the stars are distributed in three dimensions. Sure, the bright ones might seem closer, but there are many exceptions to that rule. Still, it’s hard to avoid seeing the night sky as a crystalline sphere, as the ancients first imagined it.

When you move through space, and if you move far enough, the positions of the stars relative to each other will shift. Familiar shapes of constellations will morph into different shapes. New Horizons has traveled so far from Earth that Proxima Centauri, the nearest star to Earth, has shifted in position relative to more-distant background stars.

It’s not a lot of shift. Given the distances and directions between Earth, New Horizons, and Proxima Centauri, the amount of angular parallax shift is:

That’s not much. The full Moon has an angular diameter around 1900 arcseconds. The parallax shift we see in Proxima Centauri from Earth, at opposite points in our orbit around the Sun, is a mere 1.5 arcseconds. If you want to know more about parallax check out my March 2, 2020 post: How We Measure the Distance to a Star.

At the time of the photos (April 2020), New Horizons was around 7 billion km (4.3 billion miles) from Earth. That’s 46 AU (astronomical units), where 1 AU = the distance from Earth to Sun. The radio signal from New Horizons carrying the image, traveling at the speed of light, needed 6 hours 30 minutes to reach Earth. 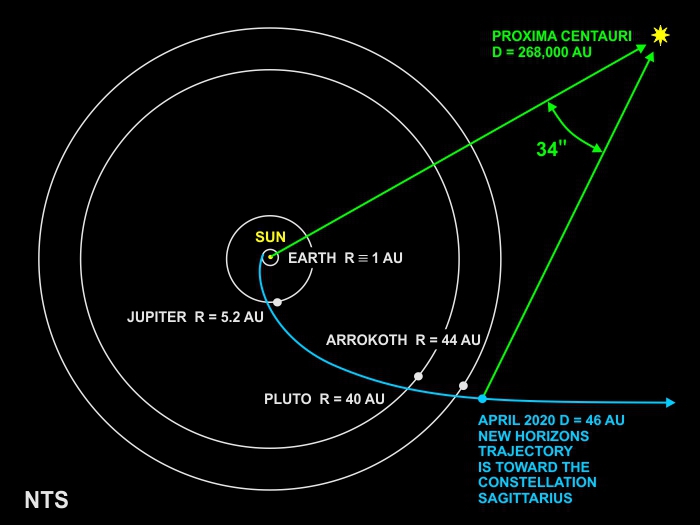 New Horizons is heading in the direction of the constellation Sagittarius at 14.10 km/s (8.76 mi/s) relative to the Sun. It’s cameras are still functioning and there may be the opportunity to photograph other objects in the Kuiper Belt. The craft visited Arrokoth earlier this year, and mission scientists are currently considering additional KBOs (Kuiper Belt Objects) for potential flybys.

New Horizons is powered by a radioisotope thermoelectric generator (RTG) and has a lifetime of 25-30 years. It was launched in 2006 so will be returning additional images until at least 2031. By that time several other nearby stars will show a parallax shift, but the real excitement will be discovering more KBOs.

Next Week in Sky Lights ⇒ How RTGs Work