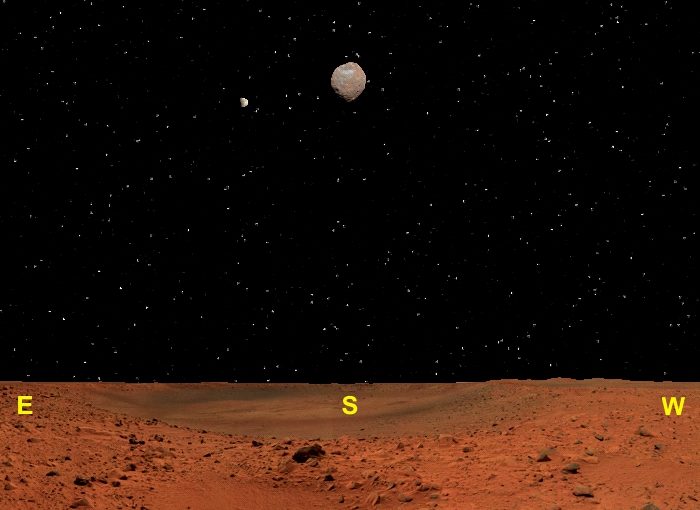 Answer: The explanation is difficult to visualize so I created the above animation to see how it works. There is no easy “short answer” here. You really have to see it happen.

The animation simulates the motions of Phobos, Deimos, and the stars as seen from a location on the equator of Mars. It runs for one martian day (aka “sol”) which is about 3% longer than a day here on Earth. But to keep things simple, let’s imagine that 1 sol = 24 earth-hours. The animation compresses 24 hours into 60 seconds. I’ve eliminated the day/night cycle so you can focus on the relevant motions.

I’ve also added Earth’s Moon to the simulation for contrast and comparison. I placed it 384,400 km (238,855 miles) away from Mars, so it would appear the same 0.52° diameter it does on Earth. From moonrise to moonset it crosses the martian sky in the same (average) 12 hr it takes on Earth. Of course, with the gravity of Mars only 38% that of Earth, such an orbit would be unstable.

Now watch what happens in the animation. You can see that both Deimos (rising in the east) and Phobos (rising several times in the west), are both moving from west to east relative to the stars. The stars’ apparent motion is a result of Mars rotating (also from west to east), and thus provides a fixed background to which other motions can be compared.

Deimos circles Mars at an orbital radius of 24,463 km. That’s slightly higher than synchronous orbit radius of 20,428 km, so its motion across the sky is very slow. There are 60 hours from Deimos-rise to Deimos-set. The orbit of Phobos has a radius of only 9376 km, so it zips across the sky in just 7.65 hr. Because Phobos orbits below the synchronous altitude, it orbits faster than Mars rotates. This is why it rises in the west and sets in the east.

Note that synchronous orbits exactly match the rotation rate of the planet. Hence, the orbiting body never changes its position in the sky — it’s basically “parked” above a point on the equator.

There’s a couple other interesting features you can see in the animation. First, both moons of Mars are much closer than our own Moon. Not only would they partially “eclipse” our Earth’s Moon, but their irregular shapes would be clearly visible. The moons of Mars lack sufficient gravity to pull themselves into spherical shapes. Some have suggested they may be captured asteroids.

Like our Moon, Phobos and Deimos are tidally locked so the same face is visible from Mars throughout their orbits. They also go through the usual phases (crescent, first quarter, full, etc.), but that’s not shown in the animation.

Finally, and you may have missed this in the animation, Phobos orbits so low that when it passes overhead it appears 50% larger than when rising or setting. Same as what happens when an airliner crosses the sky — it looks smaller on the horizon and larger when it’s overhead and closer. By comparison, because it’s so much farther away, Earth’s Moon appears a mere 2% larger when it’s overhead. You wouldn’t notice the change unless you measured it.

2 comments on “Q&A: The Unearthly Moons of Mars”