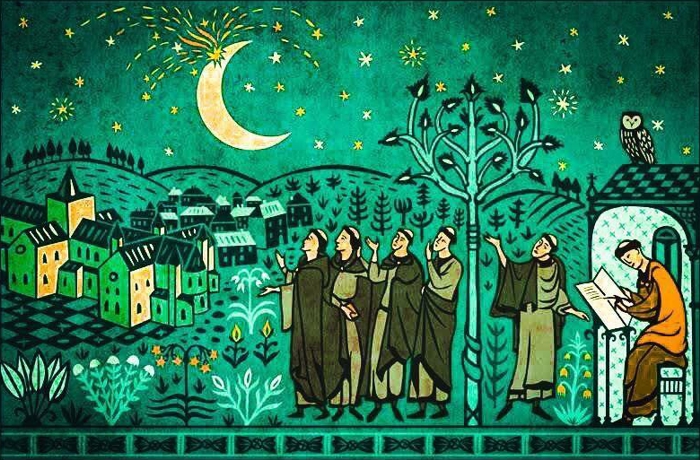 Question: I know Earth gets hit by meteors all the time. So it seems like the Moon should also get hit. Has anyone ever seen this happen, or got a video of it?  — CL, Owensboro, KY

Answer: Yes and yes. The above graphic is an illustration from the chronicles of Gervase of Canterbury, historian of the eponymous abbey. His story tells of five monks who were outside in the abbey’s garden shortly after sunset. The date was 18 June, 1178. Here’s his account:

“They saw the upper horn [of the moon] split in two. From the midpoint of the division a flaming torch sprang up, spewing out, over a considerable distance, fire, hot coals and sparks. Meanwhile the body of the Moon which was below writhed, as it were in anxiety, and to put it in the words of those who reported it to me and saw it with their own eyes, the Moon throbbed like a wounded snake. Afterwards it resumed its proper state. This phenomenon was repeated a dozen times or more, the flame assuming various twisting shapes at random and then returning to normal. Then, after these transformations, the Moon from horn to horn, that is along its whole length, took on a blackish appearance.“

In 1976, geologist Jack B. Hartung proposed that this event recorded the formation of crater Giordano Bruno (below). The bright ray pattern (left) suggests a fairly recent impact. The crater is 22 km (14 mi) in diameter so it must have been a spectacular sight even to the unaided eye.

Note that when a meteor hits the Moon, it doesn’t look anything like when a meteor hits the Earth. On the airless Moon there’s no visible trail as in Earth’s atmosphere. There is a brief flash of light at the moment of impact as the meteor’s kinetic energy is converted into heat, but if you blink you’ll miss it. Incandescent regolith cools rapidly in the −183°C (−298°F) lunar environment.

I say “brief flash of light” because most meteors are much smaller than the 1178 impactor. Meteors the size of a potato can deliver enough impact energy for the flash to be seen (through a telescope). By comparison, the 1178 impactor likely had a diameter near 2 km to produce a 22 km crater and create the prolonged visual display described by Gervase. Here’s a video showing what astronomers most commonly see when a meteor strikes the Moon.

If you do a search for “meteor moon video” you’ll find many other examples. All of them record meteors hitting the dark part of the Moon. For a strike to produce a visible flash on the illuminated side of the Moon, the impactor would have to be significantly larger than a potato. Smaller impactors might raise enough dust to obscure surface details, but without the flash of light those events could instead be generic transient lunar phenomena.

I know several amateur astronomers who take continuous videos of the Moon during meteor showers. Most of the time they record no impacts. Every now and then they get lucky, but the flash of light is rarely more then a few pixels and frames.

2 comments on “Q&A: Meteor Impacts on the Moon”