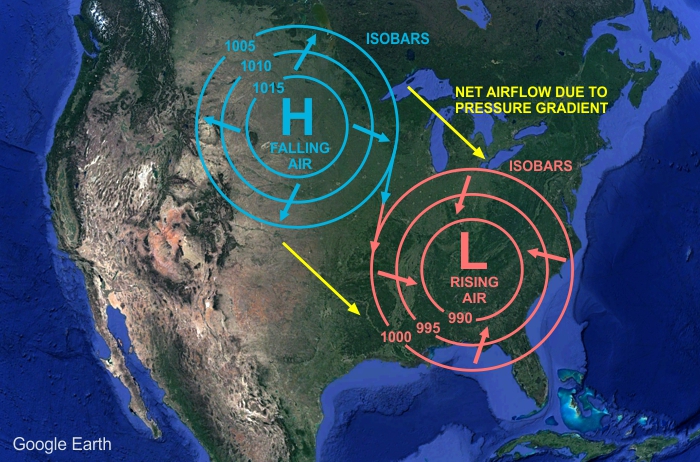 Question: We were flying kites at the park last weekend and there was barely enough wind to keep them in the air. We still had fun, but it made me wonder: What makes the wind blow? — JS, Chicago, IL

Answer: The textbook answer is: Wind is caused by the tendency of air to flow from high pressure areas (H) to low pressure areas (L). Those are the H and L symbols you see on weather forecast maps. But the airflow is not directly from H to L as that rule might suggest. The actual motion is more complex.

FYI, extreme low pressures around 870 mbar can occur in the centers of hurricanes, and (though it’s difficult to measure) as low as 825 mbar inside strong tornados. Pressures as high as 1080 mbar have been measured in low-lying regions of Siberia, where the air is cold and dense. Comparable high pressures occur at below-sea-level sites such as Death Valley and the Dead Sea.

If you study a real weather map (not the kind you see on the news) you’ll see lots of “flag like” symbols scattered around. These are called wind barbs. They’re a shorthand way of indicating wind direction and speed. It’s a fairly easy icon to understand, once you know the key elements. Take a look at the examples below noting the conventions used for direction and speed. 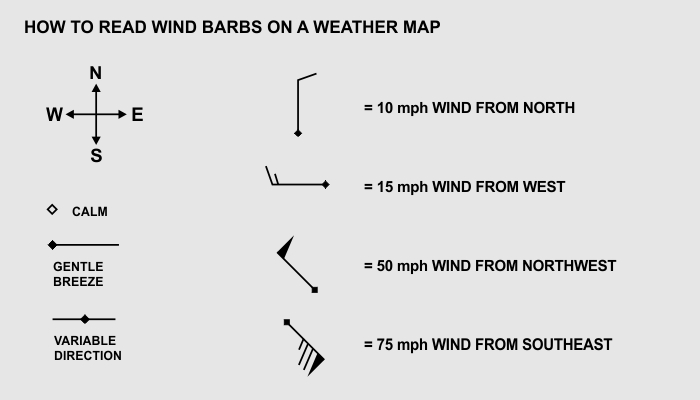 On a real weather map the wind directions shown may seem counterintuitive. One might expect the winds to blow directly from H to L, much like the “net airflow” (yellow) shown in the top graphic. But on its way from H to L the moving air experiences a Coriolis force that causes its path to curve in a direction determined by Earth’s rotation. This is why high pressure areas rotate clockwise (in the northern hemisphere) and low pressure areas rotate counter-clockwise.

So although the net airflow is in the direction you’d expect, the air almost always follows a circuitous path from H to L. Surface topography also plays a part — mountains, bodies of water, and even large cities can redirect the flow of air.

This answers the question: What causes wind? The curious reader might now wonder: What causes high and low pressure systems? We’ll return to that question in a future post.

Next Week in Sky Lights ⇒ Meteor Impacts on the Moon