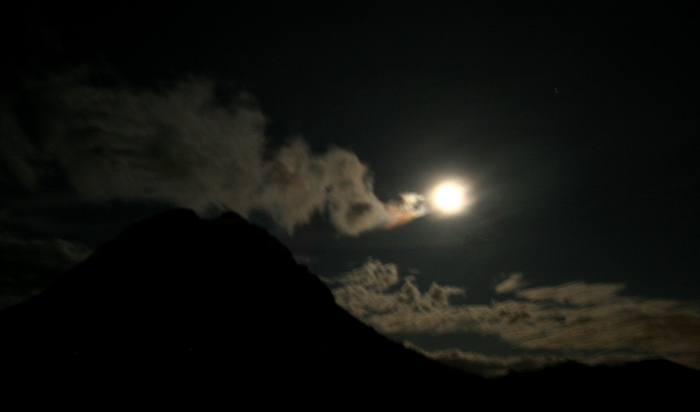 Well, it sure looks like a fireball in this photo, doesn’t it? Truth be told, that “fireball” is actually the Full Moon (overexposed) at the end of a curiously sinuous cloud. You can see a hint of lunar corona near the end of that cloud. It was drifting to the left relative to the Moon, so this chance alignment lasted only 1-2 seconds.

The Moon was behind the cloud for some time. But when I saw the imminent alignment, I ran back inside to grab my camera. No time for a tripod or any special settings. I fired off several shots by hand at full auto. Not surprisingly, most were blurred. Only one was good enough to use.

I thought about including it in my next pareidolia post. See: Pareidolia Revisited and Cloudzilla. But this was more than just clouds and didn’t really fit the theme. In the end I decided it was sufficiently cool to stand on its own — as an example of how being in the right place at the right time can often produce captivating photos. If you have some time to burn, check out these 30 perfectly timed photos.

When your photographic fancy is the sky, there’s many regularly occurring phenomena like sunset, moonrise, and meteor showers that are easy to anticipate. Many of the photos you’ve seen in my posts took advantage of that predictability, e.g., Saguaro Moonrise and Saguaro Sunset. But every so often you catch a transient event like this one — if you’re lucky and have a camera close at hand.

Next Week in Sky Lights ⇒ Hall of Mirrors