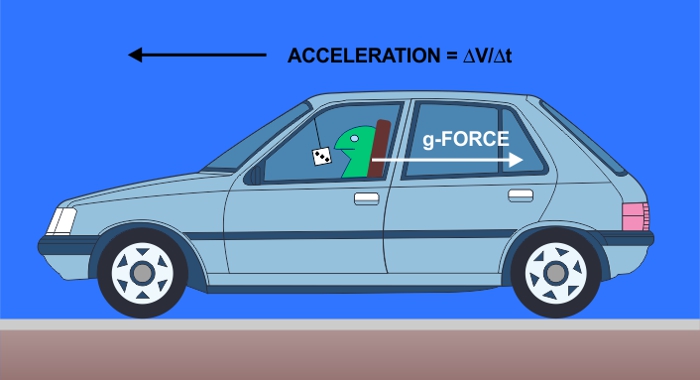 Question: I read your post Getting to Mars as Fast as Possible. Fascinating concept. But there’s one thing I don’t get. How can acceleration cause the same effects as gravity? — TJR, Harshaw, WI

Answer: Several readers asked about that. To a physicist the answer is: acceleration + inertia = g-forces. The effect is quantified by Newton’s Second Law: F=ma [force = mass × acceleration]. Inertia is a fundamental property of all matter (mass) that causes it to “resist” when you try to accelerate it. And this resistance is the basis for producing artificial gravity.

We’ll start with a common shared experience. In a vehicle that’s accelerating or braking, occupants feel a force pushing them back into their seats or forward into their restraints. This is, in a sense, “artificial gravity” caused by the vehicle’s acceleration or deceleration.

Einstein’s Equivalence Principle says the effects of gravity are indistinguishable from the effects of acceleration. When you accelerate in your car, the dice hanging from the rear view mirror swing toward the rear of the vehicle. If you park on an incline, they do the same thing. The more rapidly you accelerate the vehicle, or the steeper the slope you park on, the farther back the dice will swing. Likewise, in both cases, the vehicle’s occupants will feel a force pushing them back more strongly into their seats.

The force you feel when accelerating is called a “g-force” because it acts the same as gravity. It’s caused by the inertia of your body resisting the vehicle’s acceleration. Matter prefers to move with constant speed, or to remain at rest (which is a constant speed of zero). It takes a force to change speed, and what you feel as “being pushed back into your seat” is actually the force from the seat pushing you forward to accelerate your mass along with the vehicle.

For the dice just hanging at an angle from the mirror, and not strapped into a seat, their behavior is more easily understood as the vehicle continuously “getting ahead of the dice”. When your vehicle reaches the desired higher speed and you take your foot off the accelerator, that g-force disappears. You no longer feel the push of the seat and the dice return to hanging vertically.

Mathematically, this type of acceleration can be calculated with the formula:

where ΔV is the change in speed, VF is the final speed, VO is the original speed, and Δt is the time it takes to accomplish that ΔV. Acceleration is measured in units of “meters per second per second”, usually abbreviated as “m/s/s” or simply “m/s2“. Normal Earth gravity causes an acceleration of 9.8 m/s2 (32 ft/s2) in falling bodies, so that amount of acceleration is called “1g”.

Not many cars can accelerate at 1g — the current record is shared by the Porsche 918 Spyder and the Dodge Challenger SRT Demon. They can hit around 1.3g, but only during the 2–3 seconds it takes to peg the tachometer. Based on its “0 to 60” performance my Honda CRV can hit around 0.2g. That would only swing the dice back by around 15°, as portrayed in the top graphic.

In my post about 1g spaceflight to Mars the acceleration is constant at 9.8 m/s2, so a g-force of 1g is felt by the crew in a direction opposite the acceleration. Here’s what that looks like: 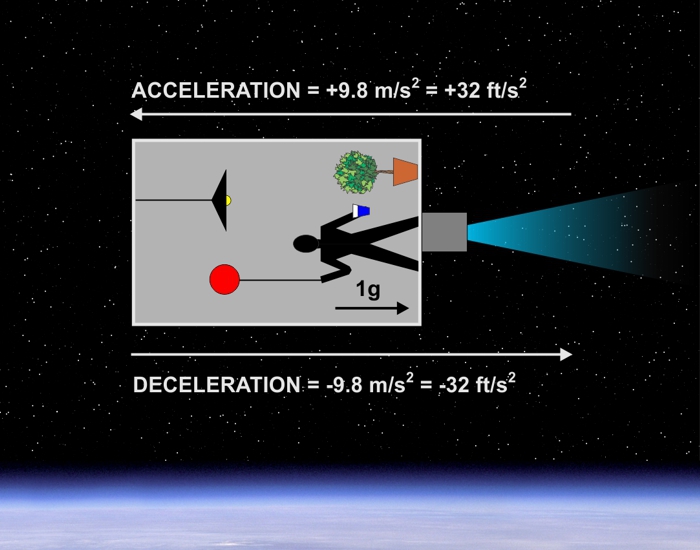 Note that, if the spacecraft is moving to the right and decelerating, the effect is the same as accelerating to the left. This follows from the vector description of motion in physics, where deceleration is properly referred to as negative acceleration. It works the same way in your vehicle: You feel a g-force when you speed up or slow down, including when you start it into motion from a state of rest.

As long as the spacecraft maintains an acceleration (or deceleration) of 9.8 m/s2 the crew will feel “normal gravity” in the direction opposite that acceleration. Feet are held firmly to the “floor”, plants grow “up”, liquids stay inside cups, and chandeliers hang “down”. Because the air in the station also feels this g-force it stratifies with greater density near the floor, so helium balloons would also behave as usual.

1g trajectories are the fastest way to travel through space. Alas, we can’t do that for large distances because of the limits to chemical propulsion. We proved that for Earth to Mars travel in an earlier post. Earth to Moon at 1g might be doable using chemical propulsion. Travel time would be around 3 hours — half that of a flight from New York to London. But again, we don’t yet have engines that can withstand a 3 hour burn. We’ll explore another option next week.

Q&A: How We Measure the Distance to a Star
Practical Artificial Gravity
HOME