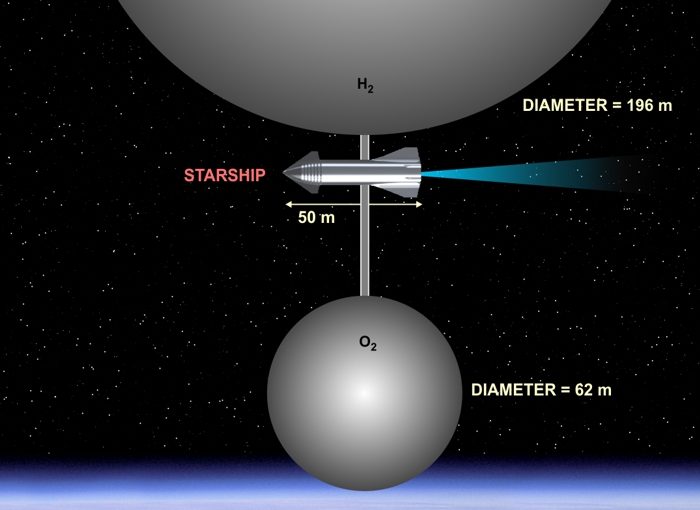 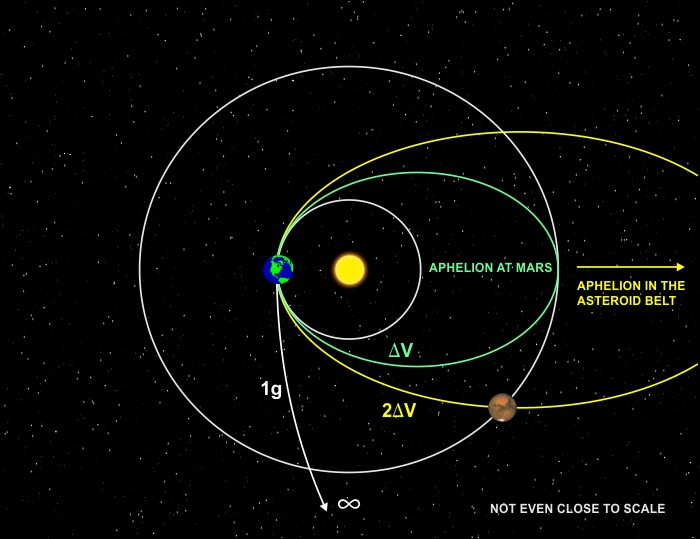 The fastest voyage to Mars would be achieved with a constant 1g trajectory, shown as the white curve in the graphic. In this flight plan the spacecraft would accelerate at 9.8 m/s2 for the first half of the voyage, then decelerate at 9.8 m/s2 for the last half. This would require the engines to burn continuously. Maximum speed of 635 kps (1,420,000 mph) would occur at the midpoint. You would reach Mars in around 36 hours. This would also avoid the problems of prolonged weightlessness and cumulative radiation exposure. Unfortunately, we don’t yet know how to build the type of engine required for 1g spaceflight.

But just for the fun of it, let’s do a quick estimate of the amount of fuel needed for a 1g flight to Mars. We’ll use the Starship designed by Elon Musk’s SpaceX. It has a total payload mass of 100 metric tonnes (100,000 kg) and can carry all that is needed for a crewed mission to Mars. To accelerate and decelerate 100,000 kg at a rate of 9.8 m/s2 for 36 hours requires a lot of fuel. Burning hydrogen and oxygen releases energy at the rate of 142 MJ (megajoule) per kilogram of hydrogen. We will assume an engine efficiency of 100%.

By the time Starship reaches the midpoint of its journey it will have accumulated a kinetic energy of:

where VF is the midpoint speed and VO is the original parking orbit speed at Earth.

For the second half of the journey, an equal amount of energy would be needed to decelerate the craft. That means you’d need twice that amount: 4.0×1016 J.

Now we can calculate the mass of fuel required. There’s a relevant parameter known as energy density. It can be expressed as “energy per mass of fuel”. It has no official symbol so I’ll just call it D:

If that mass of hydrogen is stored in a liquid state (with density ρ = 70.8 kg/m3), it would have a volume of:

This would require a fuel tank with radius 98 meters. Spherical tanks contain a given volume of fuel using the least amount of tank material, so this shape will minimize tank mass. Starship is 50 meters long and 9 meters in diameter. The following graphic shows correctly scaled spherical fuel tanks attached to Starship, including a tank for the 1.4×108 kg of liquid oxygen required to burn the hydrogen. That’s half the mass of hydrogen as follows from the reaction formula: 2H2 + O2 → 2H2O

Using the same calculation as above, and given the density of liquid oxygen (1141 kg/m3), that fuel tank would have a radius of 31 meters. So the final configuration of Starship for a 1g Earth-to-Mars flight would look something like this: 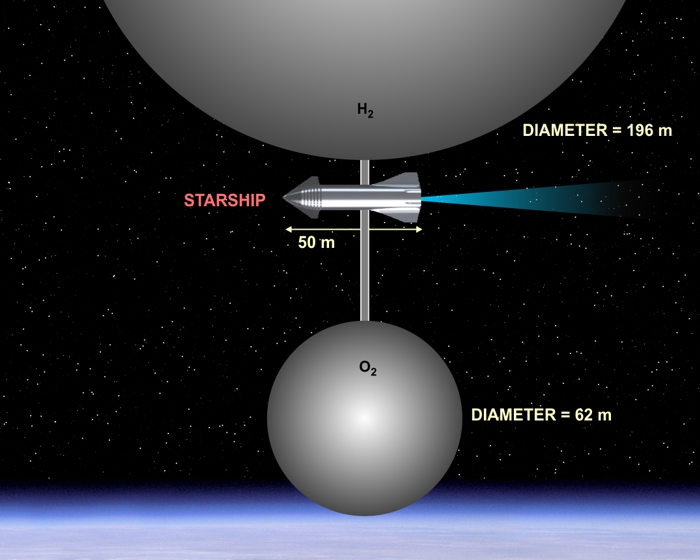 Stop laughing and bear with me. These additional tanks of H2 and O2 fuel would need to be attached in a manner that balances their centers of mass to ensure the engine thrust doesn’t impart any rotation. In reality, Starship would need to be redesigned to incorporate those tanks into an in-line configuration. I chose to show it this way to better illustrate the scale of the fuel tanks. Note that Starship itself is half a football field long.

But wait! Now we have more than the original 100,000 kg Starship to accelerate. The addition of all this fuel just increased the total mass by a factor of 4200. And that doesn’t include the mass of the tanks themselves. To allow for the fuel needed to accelerate the remaining fuel, we need to use a variation of Konstantin Tsiolkovsky’s rocket formula to calculate the additional fuel required:

So the extra mass of fuel required would be

Now we’re talking about a fuel tank radius around 2×1021 m. Houston, we have a problem. And that problem is the practical limits of conventional chemical propulsion. The astronomical size (pun intended) of the required fuel tank tells us we can’t do this. 1g trajectories will only become possible after development of an advanced propulsion engine. Unfortunately, that’s not likely to happen in the foreseeable future.

Which brings us back to last week’s post: Getting to Mars Faster. We can cut the travel time significantly by refueling in lunar orbit (and at Mars), shaving months off the Hohmann transfer average of 8 months 18 days each way. Refueling infrastructure can now be built using remote robotics. We should build that infrastructure first, then go to Mars.

Getting to Mars Faster
Q&A: How We Measure the Distance to a Star
HOME