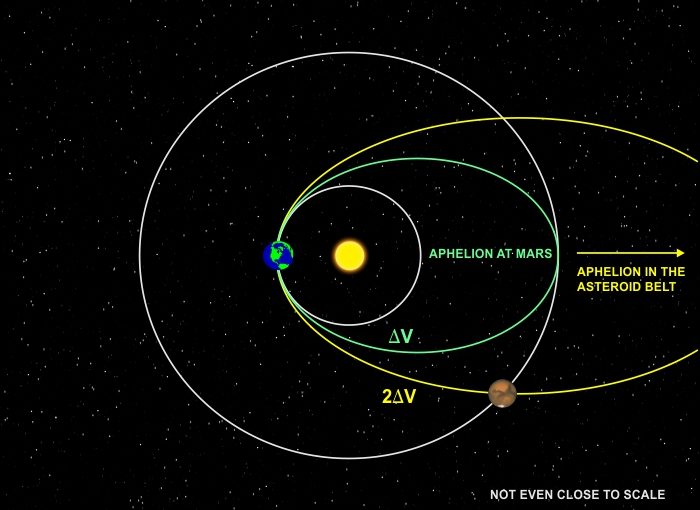 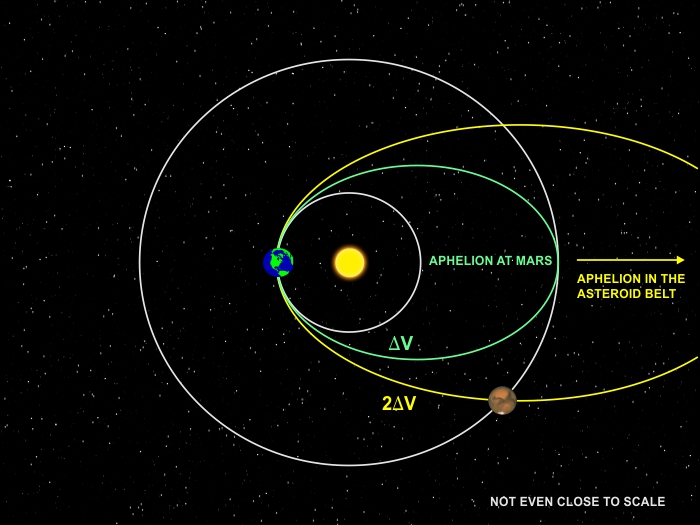 Last week I explained why it takes 9 months to get to Mars. We use an interplanetary trajectory known as the Hohmann transfer. It’s the least energy trajectory, meaning it takes the least mass of fuel of all possible routes. For a Hohmann transfer we need a ΔV of 2.9 km/s. The laws of physics tell us this trajectory will require 8 months 18 days, on average, to travel from Earth to Mars. Likewise the return trip.

If we throw out the “least energy” requirement we can cut travel time significantly. But it will require either larger amounts of propellant or an advanced propulsion engine. If we can generate a larger ΔV, the elliptical orbit will be stretched in length and width, allowing it to intersect the orbit of Mars sooner than apogee and reduce the length of the voyage. Of course, we’ll then need a larger negative ΔV to brake into orbit around Mars, and that also takes more fuel. A faster trajectory with 2ΔV would look something like the yellow path above.

If the interplanetary craft were able to refuel in orbit, instead of carrying all its fuel from initial launch on Earth, trajectories even shorter than the 2ΔV path could be achieved. You want 3ΔV? 4ΔV? It all comes down to how large a fuel tank you’re willing to build.

But you can’t launch that much fuel from the surface of Earth. There are structural limits to fuel tank size, given current materials and technologies. The only way to load that much fuel is to refuel in space, either in low Earth orbit (LEO) or lunar orbit. Economically and logistically, the latter makes far more sense.

An established lunar base could use available water ice to manufacture fuel in the form of hydrogen and oxygen. This fuel would be produced by electrolysis. For water the reaction formula is:

Solar energy is abundant on the Moon and could provide the power for electrolysis. Further, getting that fuel into lunar orbit for refueling is a lot less expensive than launching it from Earth — the cost per kilogram of fuel is 1/6 that required for an LEO.

Fuel could be launched into lunar orbit via low-power shuttles to stock refueling stations for any interplanetary spacecraft. NASA’s Lunar Gateway project could be that first “orbital gas station” if a refueling module were included with other planned modules. Gateway could become our stepping stone to the Universe.

So yes, we can get to Mars in less than 9 months. The physics is established and the technology exists. The infrastructure doesn’t. My take has always been to establish a base on the Moon first, along with an orbital refueling station. And it now looks feasible to build and automate the entire ice-to-fuel infrastructure using robots. The only human intervention required would be for managing the transfer of fuel to Gateway.

Do all that first, then we can go to Mars. In fact, with a sufficiently large fuel tank, we should be able get to Mars in a mere 36 hours — but more about that next week.

Q&A: Why a Journey To Mars Takes 9 Months
Getting to Mars as Fast as Possible
HOME