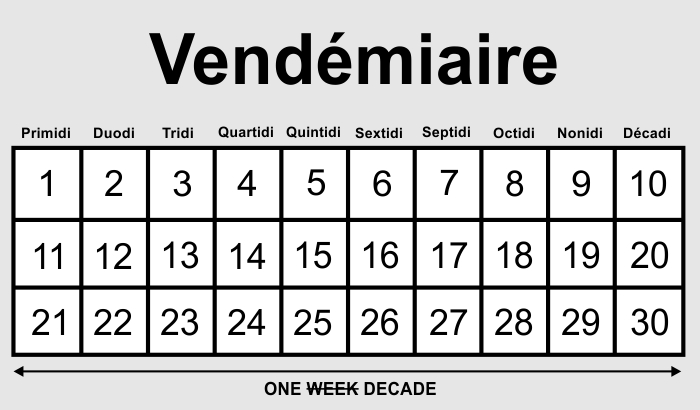 Question: We’re learning the metric system in science class this year. It sure is a lot easier than inches and ounces. The book said there was once a metric calendar, but the explanation was kind of confusing. It said the calendar had 12 months of 30 days, but that only adds up to 360 days, so it’s short by 5 days. How could a calendar like that ever work? — FT, Bristol, UK

Answer: Before I can answer your question we’ll need to look at some history. The French Revolution (1789–1799) precipitated many societal changes, and it happened during the ongoing Scientific Revolution. One of those changes was the Système international (d’unités), or simply SI — what we commonly call the “metric system”.

The impetus for SI’s development was the desire for an easily reproducible (and calculable) system of weights and measures that could be used globally. This is especially valuable for science and engineering. At the time, most of Europe used variations on what is called the Imperial System, with a mix of arbitrary measures (e.g., yard, ounce, furlong, pound, slug, hectare). In the spirit of the Revolution, they wanted to distance themselves from arbitrary artifacts of the past and embrace reason and logic and objectivity.

SI went on to become widely accepted in most of the developed world for both scientific and commercial purposes. One of the French innovations, however, did not fare so well: the Metric Calendar.

Proposed by a committee of intellectuals, including astronomer Pierre Laplace, the Metric Calendar would consist of 12 months of 30 days each. The graphic shows the calendar layout. Note that days are given simple Latin names describing their place in the décade. Again, this was a rejection of day names derived from ancient mythologies and an appeal to reason. So there were three décades in each month instead of (approximately) 4 weeks.

The months themselves were renamed in a way that somewhat better described them, at least in the northern hemisphere. You can see the 12 names here. The Metric Year began on the day of the Autumnal Equinox (in France), which is around September 22–24. The first month of the year was named Vendémiaire (French for “grape harvest”).

And that brings us your question. Obviously, this calendar is short by 5 (or 6) days. The true length of a year is 365.2422 days, as I demonstrated in my January 4, 2016 post. The Metric Calendar handled that by tacking on 5 (or 6) national holidays as needed at the end of the year. Those days were given names that emphasized fundamental revolutionary values:

When Napoleon became Emperor of France he restored the previous Gregorian calendar, and reinstated its traditional saints’ days and holidays. For this act he received the blessings of Pope Pius VII. 13 years after it was adopted, the Metric Calendar became little more than a historical curiosity.

The Metric Calendar was a cool idea, and the extra days are no less arbitrary than February 29. But I’m fine with the calendar we have now — the Gregorian Calendar is used throughout most of the western hemisphere, we’ve been on it since 1582, and changing it now would require “rewriting” a lot of history — Independence Day in the US would be celebrated on Germinal Quintidith (English translation: Germination 5th).

There have been several other calendar variations proposed, but the reality is: natural cycles like days and years are not commensurable. Whatever your choice of calendars, you’re going to have some irregularities that require exceptions to the rules.