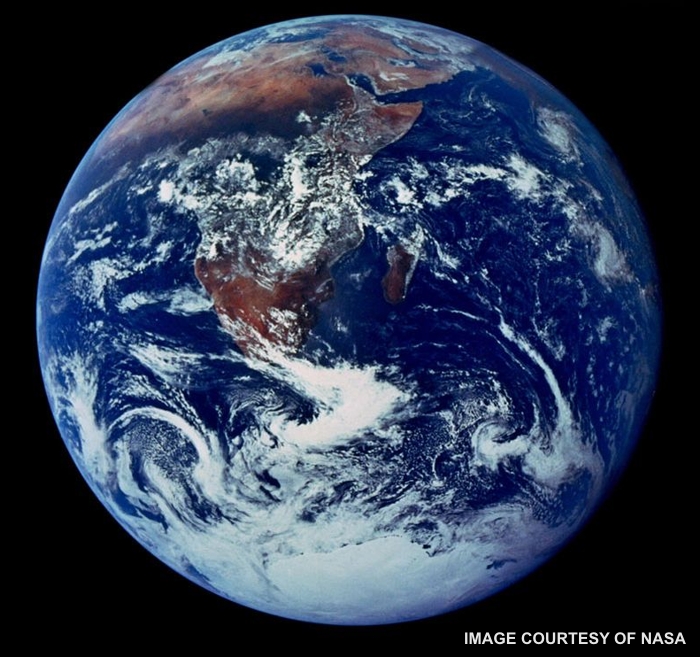 I’ve been receiving a lot of emails about climate change, some with questions, all expressing concern. I get it. Greta Thunberg spoke eloquently on that topic to world leaders at the UN last month. She accused them of lacking the courage to act in defense of the planet. I get that too. But I also share her optimism that science provides the means to act.

And so I present this alternative future. It was my entry in a 2016 physics journal competition that asked for the following: Write a science news article for the year 2116. Predict what might be making the news 100 years from now. Write it in the style of a news article. Stay within the laws of physics, but be creative.

What follows is my entry — another fail. The winner envisioned using robotic spacecraft to build a massive telescope from engineered asteroids, and using that telescope to visually confirm the existence of earth-like exoplanets with continents and oceans. I have to concede it was an impressive piece of writing. Predicting the future in any field is tough. Being accurate is even tougher.

I hope my story is accurate.

On Wednesday, January 1, 2116, US President Sandra Gore threw the switch cutting off power at the 1.2 GW Itobe Power Plant in Kogi State, Nigeria. Itobe had been in operation since 2016, and was the last operating coal burner on the planet.

President Gore is a fifth-generation descendant of Sir Albert Arnold Gore, US Vice President from 1993–2001 and founder of the Climate Reality Project. She’s also the first engineer to hold that office since James Earl Carter in the late 1970s. As Secretary of Energy from 2100–2104 she spearheaded the transformation of archaic energy subsidy and funding policies to better assist developing nations. Appropriately, Gore was invited to throw the switch at Itobe.

Remarking on the occasion, Gore noted “It took 50 years for the global community to accept the science of climate change, and another 50 to fix the problem, but we have now entered a new era of clean energy. As of today, the age of fossil fuels has ended. And the decline in average global temperature, already in progress, is expected to continue.”

In the United States, production of electricity from burning coal began in 1882 at Pearl Street Station, the Edison plant in Manhattan. Since then, the global use of coal power has followed a growth and decline curve similar to that of oil — with one unexpected detour (see figure 1). 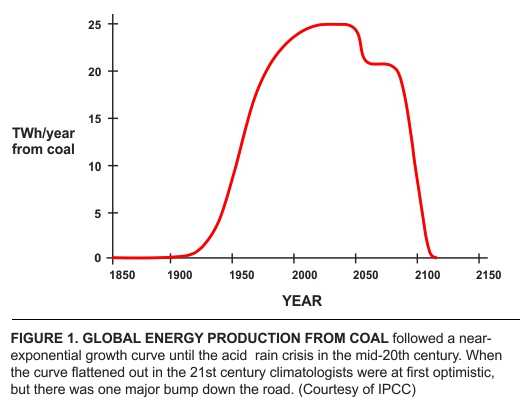 The geoengineering fiasco of 2050, a last-ditch attempt to sequester atmospheric carbon by encouraging algae blooms, had unanticipated effects on the fishing industry.

Many of the then-developing nations were dependent on that industry, and backed out of the IPCC Treaty of 2040. This led to a plateau in coal energy production from 2060–2090, where it leveled off at around 21 TWh/year.

Coal fired power plants were still attractive since coal was selling cheap. The reduction in demand had driven prices to under US$10/ton by 2035.

With Third-World fishing and farming industries collapsing, rising unemployment, and growing trade deficits, plans for replacing coal fired plants with renewable sources were cancelled or put on hold. It was only the massive influx of cash and infrastructure from wealthier nations that allowed those last coal plants to be phased out. The energy generated from burning coal then resumed a nearly linear decrease. Over the next 20 years it brought the global budget to zero.

How not to reduce atmospheric CO2

For those too young to remember, the “geoengineering fiasco of 2050” was a reaction to steadily increasing atmospheric carbon dioxide levels. Despite huge reductions in the burning of fossil fuels, the release of greenhouse gases from melting permafrost and methane clathrates in ocean sediments offset those reductions.

Climatologists had warned about a potential “tipping point” beyond which global warming would be difficult to reverse. In retrospect, it now looks like that happened sometime around the turn of the millennium. By 2050, the average global temperature had risen 2 °C above the pre-industrial average.

And that was when, not without considerable dissent, the G12 funded a project to dump iron sulfate into iron-poor regions of the oceans. It was expected this would induce algae blooms in otherwise low-production waters. The algae would extract carbon dioxide from the air and water via photosynthesis and, after dying, sink to the ocean floor sequestering the carbon.

At least that was the plan. The iron did indeed induce massive algae blooms, but it also upset ecosystems that had evolved under conditions of iron deficiency. The increase in dissolved oxygen changed the behavior and reproductive cycles of fish and crustaceans. The rest, as they say, is history.

NOAA published a trend analysis in 2015 (see figure 2) predicting a 0.125 °C/decade increase in the average global temperature. It reinvigorated efforts to reduce carbon dioxide emissions, but the process was tumultuous and inconsistent. It was only after 50 years of rising sea levels and extreme weather events that a global consensus was reached. 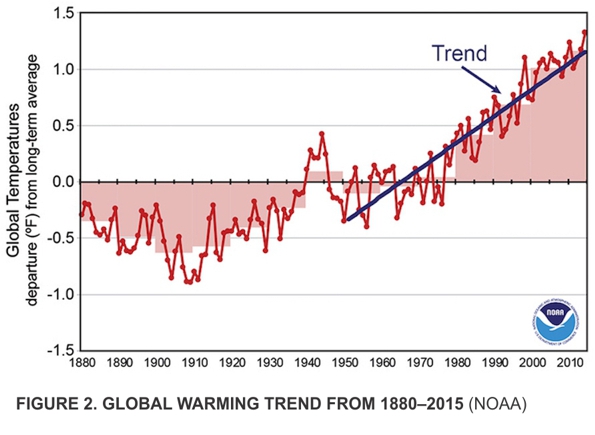 Those five decades saw an increase in the frequency and strength of hurricanes. The jet stream became chaotic, climate patterns shifted, droughts and flooding were widespread. Videos of the devastation in Liberty, Kansas on March 13, 2037 are still used in the classroom to demonstrate the effects of an EF6 tornado.

The predicted trend continued late into the 21st century, when the average global temperature finally started leveling off around 3 °C above the pre-industrial average. In 2116, we can now say with confidence the temperature is starting to decrease. But as President Gore observed, it was a long and difficult road getting to this point.

The United States was the first nation to eliminate all its fossil fuel plants. That happened in 2042, when the 34.5 MW Peru Power Plant in Peru, IN was shut down. It had been in operation since 1949. Closing all those plants became possible only after the breakthrough in PV.

In 2022, research at Google Labs developed a photovoltaic panel that exceeded the Shockley–Queisser limit of 37.7% efficiency. It was fabricated from 10-junction GaAs solar cells, used integrated Fresnel optics for concentration, and achieved a conversion efficiency of 68%. Google used 3D printing to create the required nanostructures at a fraction of the cost of earlier multi-junction cells, such as those introduced by the Soitec & Fraunhofer Institute in 2016 (with only 46% efficiency). Google’s technology brought the cost of solar energy down to well below grid parity. At US$0.10/W, it was now more than competitive with fossil fuels.

Solarization of the southwestern US happened quickly. Texas eliminated its fleet of 60 coal fired plants over a 12 year period starting in 2025. Vast areas of barren desert, and tens-of-thousands of rooftops, were outfitted with GPV. Colorado was the next state to convert. Arizona, Utah, Nevada, and New Mexico saw resistance from established utilities, but soon followed suit.

Figure 3 is a proposed energy transition strategy for the 21st century. Published in 2003 by the German Advisory Council on Global Change (WBGU), it was an exemplary model for the evolution of global energy use. Actual trends followed closely save for fossil fuels, which were all near zero by 2100. And there was an unanticipated increase in what WBGU classified as “other renewables.” 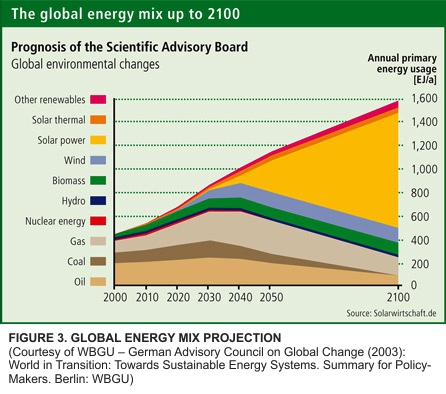 The UK was where the industrial revolution got its start, and it was the second nation to go coal-free. Lacking sufficient insolation, the UK turned to wind and wave power. Their last coal-fired plant went offline in 2052.

The UAE never built any fossil fuel plants, but in 2060 they installed 20 GW of GPV taking advantage of their abundant insolation. That capacity allowed them to decommission their fleet of six nuclear plants, all of which were operating past their design lifetimes. Other nations followed the lead of the US, UK, and UAE. By 2090 the final decline of fossil fuel power plants was well underway.

The land of fire and ice

The third nation to go coal-free was Iceland, but it was not without surprises. Fossil fuels never composed a high percentage of their energy mix, which was 75% geothermal, hydro, and wind. In 2040 Iceland embarked on an ambitious project to replace its remaining fossil fuel plants with geothermal, the “other renewable.”

Mt. Thor was the result, as any geography student can tell you. Boreholes for the project tapped into geothermal sources less viscous than anticipated. The magnitude 6.5 quake during drilling unleashed a flood of magma. Over a period of 10 years, lava built the 800 meter shield volcano later named for the Norse god.

It’s stable now, and ranks as the 25th highest volcano on the island. Horizontal boreholes tap into the interior magma lake and generate 6 TWh annually. Iceland eliminated its last fossil fuel plant in 2061.

The project was at first a national embarrassment to the Icelandic people. What began as a project to reduce carbon emissions eventually met its goals. But during the eruption period, climatologists estimate Mt. Thor dumped 10 million metric tons of greenhouse gases into the atmosphere annually. That included CO2, SO2, and other sulfates. Very little ash was produced, so offsetting cooling effects were minimal.

By 2100, Iceland had evened the slate for those emissions. These days, Mt. Thor is a source of national pride and considered a natural resource. Alas, it will always suffer from its reputation as “the first man-made volcano.”

Why was Nigeria the last nation to cease coal-burning? In 2050, when they backed out of their commitment to shut down Itobe, 15% of their labor force was connected to the fishing industry and unemployed. Nigerian President Muhammadu Buhari no longer trusted the G12 and IPCC, and in a globally televised press conference, declared that Nigeria would “continue operating Itobe to ensure the country’s stability in a world of ever-increasing energy demands.”

Gore, then Secretary of Energy, pushed for a program at Manhattan Project funding levels. She saw the difficulties faced by developing nations, and committed to providing Nigeria with the solar infrastructure needed to close that final coal-fired power plant. Congress agreed and supported her program with a $20 billion budget.

Nigeria’s 1.2 GW GPV plant went operational 9 months after groundbreaking. It required one million PV panels, but with a power density of 600 W/m2 had a footprint of only 2.5 km2. It was built adjacent to the now-decommissioned Itobe plant to take advantage of existing electricity distribution infrastructure. Itobe later became a World Historical Site, in recognition of its key role in ending the age of fossil fuels.

After Gore’s ceremonial disconnect, President Buhari proclaimed “Nigeria is proud be the keystone of this global effort. We regret that it could not have been done sooner, and we greatly appreciate the generous assistance provided by the United States.”

We’ve reduced anthropogenic carbon emissions to sustainable levels, and average global temperature data show early signs of cooling. Residual greenhouse gas emissions from arctic tundra and the ocean floor are decreasing. The climate appears to be reaching a new equilibrium, with fewer extreme weather events recorded over the last decade. Glaciers are growing, sea ice is returning to polar regions, sea level is falling, and the planetary albedo is increasing.

Still, there is work to be done. Populations displaced by rising sea levels need to be restored to their homelands. Coastal buffer zones need to be established better allowing for future climate perturbations. And a continued phase-out of nuclear power remains a priority for all the obvious reasons, though it has served us well during this transition.

Alas, the loss of species over the last hundred years is tragic. The Anthropocene Era came to be and will forever taint the historical record. It began with the Industrial Revolution in the 18th century, but we can now say it came to an end in the 22nd century.

The 22nd century holds much promise for humanity. Bioengineering, nanotechnology, and artificial intelligence continue to improve the quality of life. Have we beaten estimates for the value of L in Drake’s Equation? History will be the judge. But, as Gore concluded at the Itobe event, “We have, at present, bought sufficient time to exercise proper stewardship.”