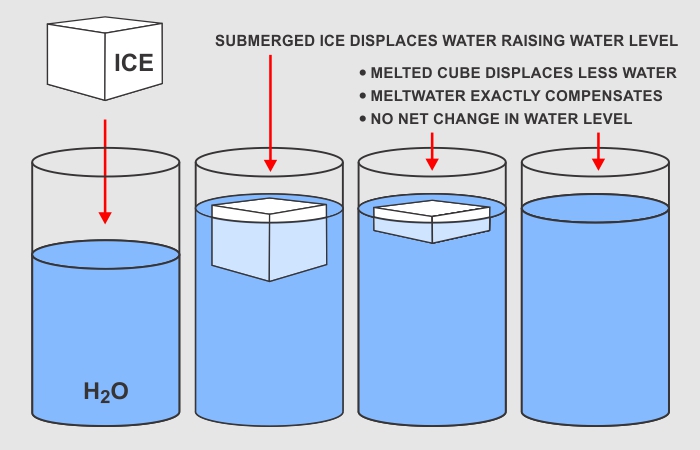 Question: I read this article about how the Greenland ice sheet is melting, and I get how climate change is making that happen faster. What I don’t understand is why the videos always show big chunks of ice splashing into the water. Not all glaciers end at the ocean. Many are farther inland, so when the chunks of ice break off they can’t fall into the sea and don’t raise the ocean levels. Seems like the water would just get absorbed into the ground. Or am I missing something? — EC, Cicely, AK

Answer: In an equilibrium state of climate, yes, most of that water would seep down into the aquifer. But when the meltwater input exceeds the capacity of the soil, as is now happening in many places, the meltwater forms itself into rivers that eventually reach the sea. Take a look at this video from Kangerlussuaq, Greenland:

There are three ways ice can be lost from glaciers. What you see in the video above is the dominant process in Greenland — meltwater rivers flowing to the sea. Scientists estimate that in July of 2019 this process alone accounted for the loss of 10 billion tons of ice (10 cubic kilometers of water) every day. This meltwater is a major contributor to rising sea levels.

The second process is calving (fracturing) of glaciers directly into the ocean. In Greenland, this is less significant than meltwater losses, but in the colder Antarctic calving is the dominant process — an iceberg the size of Jamaica fractured from the Ross Ice Shelf in 2000. Four large fragments of that iceberg are still being tracked by satellite.

A third process is sublimation, the direct evaporation of ice into water vapor. Once in the air it eventually falls as precipitation, a small fraction of which may return to the original glacier as snow, but most of which disperses around the globe. Sublimation is the dominant process at higher altitudes, where wind and sunlight are more intense and the temperature is too cold for melting. Sublimation happens to varying degrees on all glaciers.

Scientists had questions about what happens to meltwater that accumulates near the top of a glacier. Most of that water drains into deep crevices and disappears from sight. Does it re-freeze when it gets deeper into the ice, or does it somehow find its way to the sea? NASA researchers recently verified the latter. Here’s their report:

So to answer your question: There’s very few places on Earth where melting or fracturing glaciers get totally absorbed into aquifers. The vast majority of that ice will find its way, by one of three processes, into the ocean.

While we’re on the topic, I’d like to clear up a misconception about what happens when icebergs melt. The top graphic shows a glass of water and an ice cube. When the ice cube is dropped into the water, the water level rises by an amount proportional to the weight and volume of the floating cube. But once in the water, as the ice melts, there will be no further change in the water level. This is a consequence of Archimedes’ Principle. And this is why the Arctic ice cap, which floats on the Arctic Ocean, will not contribute to sea level rise as it melts. Not like that’s good news — the Arctic melt is already decreasing Earth’s albedo.

The Greenland and Antarctic ice caps, however, are not floating. They’re supported by underlying continents. That ice is currently sequestered above sea level and that’s where we need it to stay. Unfortunately, it’s not staying. Glaciers normally slide downhill at the proverbial “glacial pace”, but that pace is accelerating. Where the ice extends out over water as an ice shelf, even before it calves, it’s already causing a rise in sea level.

In an ice shelf, part of that ice is supported by buoyancy because it’s less dense than seawater (917 kg/m3 compared to 1029 kg/m3). The rest of it is supported by the rigidity of the ice itself — cantilevered out from the point of last contact with solid land. Ice shelves are fed by ice sliding off the continent, and the farther an ice shelf extends, the more of it is already floating. Whatever amount is floating, that ice displaces water and contributes to sea level rise.

Greenland is melting faster because the Arctic has warmed more than the Antarctic. There’s a significant difference in land-to-water ratios between the two hemispheres. The northern hemisphere comprises 40% land and 60% water; the southern 20% land and 80% water. Water changes its temperature very slowly compared to land, so Antarctica, being surrounded by the Southern Ocean, is partially shielded from global warming.