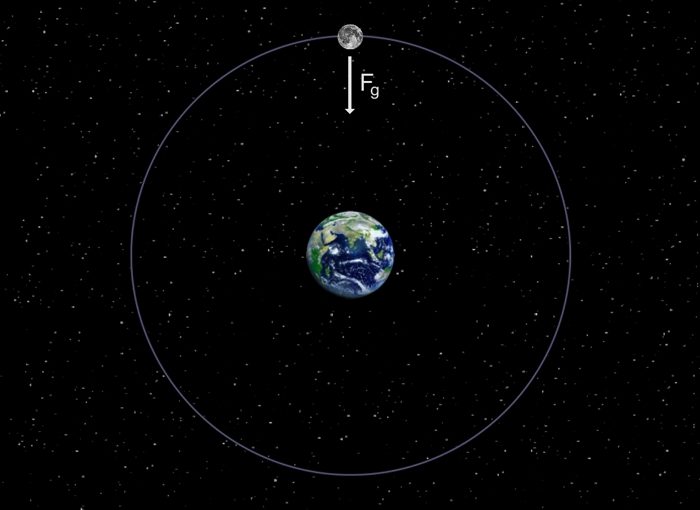 Question: Can you give me a simple explanation for what keeps the Moon up? I don’t mean “up” like when it’s up at night. I mean “up” like why it stays in space and doesn’t fall to Earth. My science teacher said I needed to know more math to understand why. I’m only in grade 7, but I want to know now. Thanks! — TK, Dallas, TX

Answer: The Moon is falling toward Earth. Fortunately, it’s going fast enough horizontally to keep missing us. If that seems strange, watch the video a few times and think about what’s happening. Notice how the Moon that falls straight down with accelerating speed, and the Moon that orbits in a circle at constant speed, both reach “ground level” at the same time. That’s a key concept I’ll return to shortly.

So if you stopped the Moon in its orbit somehow, it would indeed fall to Earth, and it would take 4.8 days to get here. Fortunately, the Moon has enough horizontal speed (3700 kph or 2300 mph) to miss the Earth every time it falls those 30 Earth-diameters. How the Moon got exactly the correct speed to do this is another question, but it’s related to how the Moon was formed.

After the orbiting Moon falls 30 Earth-diameters it still has the same speed — it’s just in a different direction. Earth’s gravity (Fg) is what changes the Moon’s direction of motion. There’s very little friction in space to slow the Moon down, so it just keeps “falling around the Earth” like you see in the video, and never really gets any closer to us.

Now let’s get back to that concept of the falling Moon and the orbiting Moon both reaching the horizontal line at the same time. This is a surprising fact about the way gravity works. If you have a “Nerf Blaster” or other harmless projectile-launching toy you can try this for yourself. Hold the blaster perfectly horizontal at shoulder height and prepare to fire. Have a friend hold a Nerf ball at the same height. Then do a “1,2,3, fire” where you launch one ball and your friend drops the other at the same time. You’ll see that both balls hit the ground simultaneously. Obviously, you’ll need to be on level ground and have plenty of open space.

It works somewhat differently with the Earth and Moon, since if you stopped the Moon to make it fall, the Earth would start falling toward the Moon at the same time. I decided to leave that complication out of the video.

If you’re curious about the math involved, and where that 4.8 day “hang time” came from, read on. Personally, I don’t think it’s too difficult for a curious 7th grader to understand. Otherwise skip to the next section.

The math comes from Sir Isaac Newton’s Law of Universal Gravitation. His law states that for orbits around the Earth:

To use this formula you have to work in units of “meters”, “kilograms”, and “seconds”. The formula applies whether the orbit is perfectly circular, slightly elliptical, or even so “elliptical” that it’s a straight line. If you try this calculation using the Moon’s orbital radius (3.8×108 m) you’ll get 2.4×106 s which is 27.3 days, the time it takes for one lunar orbit. Try it … really … it’s great practice using your scientific calculator.

Since a falling Moon is essentially in a linear orbit, we can calculate how long it would take to fall to Earth using the same formula with one minor change: For an elliptical orbit we have to use the average orbital radius. A linear orbit that starts at the distance of the Moon and ends at Earth has a long radius of 3.8×108 m, a short radius of zero, and an average radius = (3.8×108 m + 0 m)/2 = 1.9×108 m. This is how it looks for a (nearly) linear orbit: 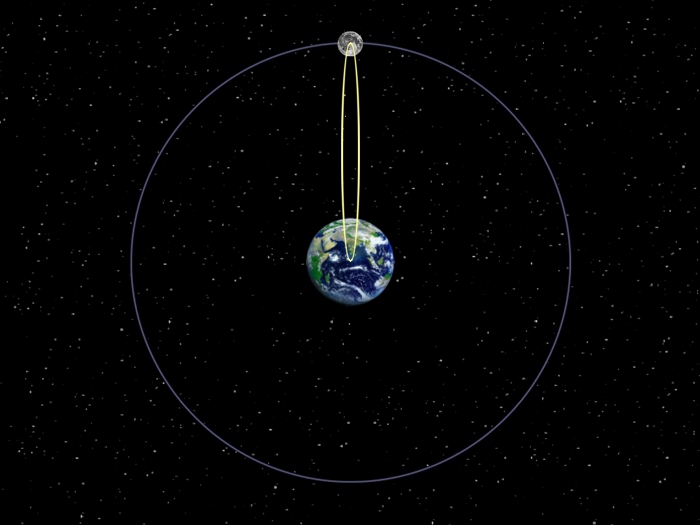 So to get back to your question, the video and math are one way to provide an answer, but another way involves an often-confusing concept from physics: inertia. You have heard, I’m sure, that all matter takes up space and has mass. Seems obvious, but you learn that fact in grade school science. What you don’t learn (until high school science) is that matter also has inertia, and the more the matter the more the inertia.

Inertia is the tendency for a mass in motion to remain in motion with the same speed and direction. And it takes a force to change either speed or direction. The Moon has a mass of 7.3×1022 kg and thus a lot of inertia. It would love to go flying off into space in a straight line. The force of Earth’s gravity, however, keeps changing the Moon’s direction of motion and holding it in an orbit.