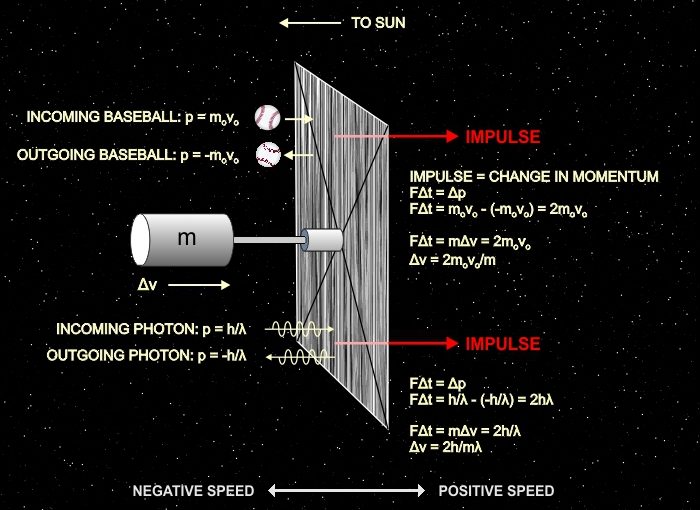 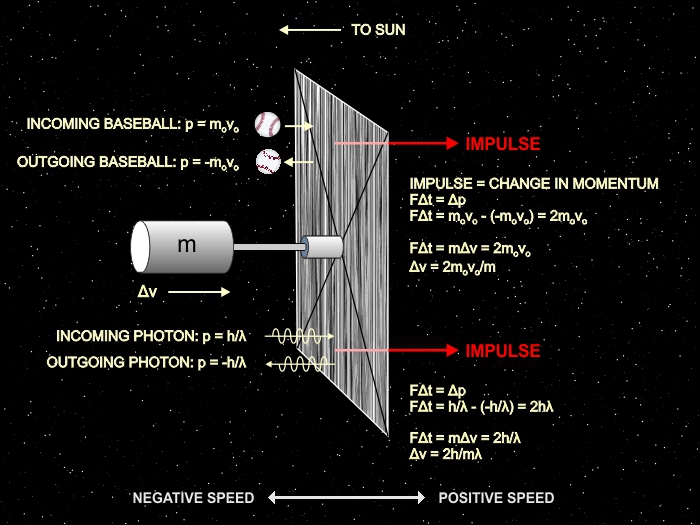 Question: I hear the Planetary Society launched something called a “light sail” into space. It has no engines and gets pushed around by light from the Sun. How does that work? I mean, light has no weight, so how can it push on something? — BN, Pasadena, CA

Answer: Strange as it seems, even though light has no weight it does have momentum (p) — the ability to exert a force on whatever it hits. It’s a really small amount of force compared to a rocket engine, but it’s enough to push a spacecraft to very high speeds under the right conditions.

Consider the light sail shown above. If it was originally at rest, and you bounced a baseball off the sail, the craft would be set into motion. A 0.15 kg baseball pitched with a speed of 45 m/s (100 mph) has a momentum of: p = mv = 6.75 kg⋅m/s. If that ball bounces off the spacecraft, it will deliver a total impulse (change in momentum) of 13.5 kg⋅m/s. Note we are treating speed as a vector with positive and negative directions.

If the spacecraft has a mass of 5 kg (as does the Planetary Society’s LightSail 2), then the craft will be set into motion with a speed of: Δv = Δp/m = 2.7 m/s. High school physics. This calculation assumes the ball rebounds with no loss of speed, something called a perfectly elastic collision. That would be a reasonable assumption if the ball hit the metal payload container. But if it hit the sail (as shown) it would likely penetrate the thin material, suffer little change in momentum, and thus impart almost no impulse.

One of these photons reflecting from the mirror-like sail would cause a speed change of:

Not much by itself, but there’s a lot of photons out there and their combined effect is significant. To do a more realistic analysis we’ll switch to an equivalent formula from special relativity: F= 2IA/c  where

That’s the weight 0.03 grams on Earth. On a 5 kg spacecraft that force will cause an acceleration of:

which will accelerate it to the same speed attained using the baseball in a time of:

The acceleration is small, but it is continuous and requires no fuel. The sail, once extended, can be faced perpendicular or parallel to the Sun’s light. This is accomplished by rotating the entire craft using internal attitude control gyroscopes, and allows the “thrust” to be turned on and off when the craft is moving toward or away from the Sun in Earth orbit. By timing these maneuvers relative to its direction of motion the craft can either increase or decrease its speed.

If the craft is already in a low Earth orbit (LEO) it has a speed of 7.8 km/s. If we want to get to escape velocity (11 km/s) and travel to the Moon or outer planets we need a Δv of +3.2 km/s. If we keep the sail facing full-on to the light while moving away from the Sun (what sailors call running with the wind), and parallel while moving toward the Sun, this will take:

In practice, it would require twice that amount of time since the craft is only moving away from the Sun for half its orbit. It is possible to increase speed while moving toward the Sun, just like a terrestrial sailboat tacking into the wind, but these more complex maneuvers are not being attempted by LightSail 2.

Light sailing is an amazing propulsion technology, but there are caveats. As you travel farther from the Sun the light intensity decreases. Near Earth that intensity is 1361 W/m2. At Mars it’s only 586 W/m2, and by the time you get to Pluto it’s down to 1 W/m2.

There’s also issues as you get closer to the Sun. The solar wind, a stream of electrons and protons, exerts an increasing force on the sail. Near Earth this force is thousands of times less than the force of light, but nearer the Sun it becomes dominant and complicates maneuvering.

Nonetheless, in the right environment, the use of light sails should become more common as the technology matures. LightSail 2 is performing well and, as of this writing, is attempting maneuvers that will raise its orbit even higher above the Earth. These tests will pave the way for practical systems with much larger sails ranging from hundreds of meters to kilometers in diameter.

I looked online for a good demonstration of the force exerted by light, but the force is so tiny it’s difficult to show. None of the popular amateur scientists on YouTube have tried it. I did, however, find an old PSSC (Physical Science Study Committee) movie from the 1960s. It’s titled “The Pressure of Light” and clearly shows this tiny effect. If you want to skip all the lead-up and explanation, jump to 14:00:

If you watched the entire video (and you really should) you may be surprised at what used to pass for “educational video”. In contrast to what’s available today, there was no glorious color, no high fidelity stereo sound, no CGI or other special effects … just a monotone demonstration of laboratory science. But if you took a high school physics class in the 60s or 70s, these old 16 mm films were state of the art — and a welcome break from lectures.