Question: I got an acrobatic drone for a graduation present, and in the manual they explained how its performance will depend on the altitude I launch from. I get how air pressure affects lift, but it made me wonder if a drone could fly on Mars? I know air is thinner there, so the blades would probably need to spin faster, but it seems like it could be done with the proper mods. Am I right? — GS, Houston, TX

Answer: Your drone couldn’t fly on Mars, but you’re correct that a properly modified drone could. Given your location (home to the Johnson Space Center) I’m surprised you haven’t heard, but NASA is planning to do exactly that sometime next year. Here’s one of several official press releases on the project, including an excellent video simulation. NASA calls their craft a “helicopter” rather than a “drone”, but regardless the number of rotors the same aerodynamics applies.

You are also correct about air pressure being an issue. Check out this video on YouTube. It shows flies attempting to “fly” in a vacuum chamber as the pressure is gradually reduced. Skip to 3:00 for the takeoff. [Note from the videographer: No flies were harmed in this experiment.]

There were other engineering challenges, like protecting the six-cell lithium-ion battery pack from low overnight temperatures — around -73°C (-100°F). NASA solved that by using some of the battery’s energy to heat the insulated electronics compartment. The battery will account for most of the helicopter’s weight, and has a peak power output of 510 W. For comparison, commercial drones have power outputs of only 30–50 W. A single solar panel with high-efficiency, triple-junction, gallium arsenide (GaAs) cells will recharge the battery as needed.

Air pressure on Mars is only 6 millibars compared to Earth’s 1013 millibars. That’s equivalent to what your drone would experience on Earth if it could get to an altitude of 30 km (100,000 ft) — which it obviously can’t. But for the generation of lift it’s really the air density that matters.

All things being equal, aerodynamic lift is directly proportional to air density. On Earth, at sea level, air density is 1.23 kg/m3. On Mars the density is around 0.02 kg/m3, so your drone would generate 0.02/1.23 = 1.6% as much lift. And unless that lift exceeds the weight, the craft cannot take off.

It helps that gravity on Mars is only 3.7 N/kg compared to Earth’s 9.8 N/kg. Your drone would weigh only 38% of what it does here. And your drone, like NASA’s, is fabricated from light-weight composite materials, so weight is less the issue. It’s mostly about getting enough lift in that thin air.

The top graphic is an artist’s impression of NASA’s helicopter on the surface of Mars. It will launch from the lander, visible in the background. Several features have been optimized for generating lift:

NASA has access to better composite materials than most drone manufacturers, and was able to cut the craft’s weight to a bare minimum. NASA also fabricated custom high-efficiency electric motors with a torque to weight ratio greater than commercial versions. The entire craft weighs in at only 1.8 kg (4 lb on Earth, 1.5 lb on Mars). The main components are shown in the graphic below. 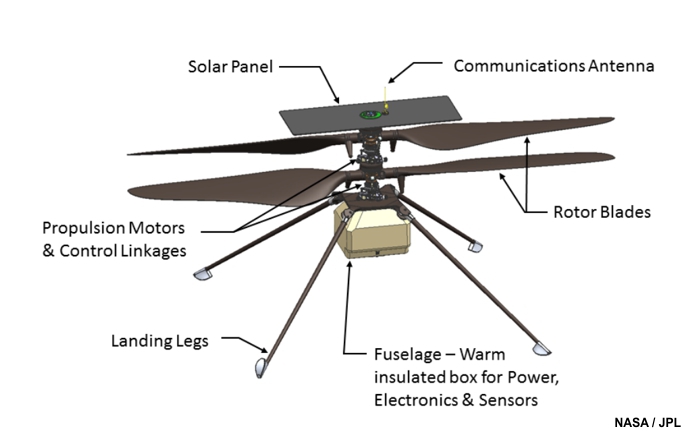 The planned mission will demonstrate “proof of concept” with multiple short flights. Maximum flight times will be around 90 seconds, covering distances of a couple hundred meters. Flight altitudes will be between 3–10 meters. The only real “science” done will be learning the capabilities and limitations of their design. Future missions will cover longer distances and explore terrain a ground rover could never reach.

For its maiden flight the helicopter will ascend directly upward, hover at 3 meters altitude for 30 seconds, then descend to test its soft landing protocols. Although it can be programmed from Earth to perform specific tasks, once in the air it must be fully autonomous. The radio delay for flight commands will be from 4–24 minutes depending on the distance between Mars and Earth. Imagine trying to fly your drone with that much latency.

I’ve been calling this craft “it” because I’m not sure of its name. Wikipedia claims the name is Mars Helicopter Scout (MHS), but the citations do not confirm that. NASA’s press release calls it “Mars Helicopter” [caps theirs]. Seems a bit generic for the first heavier-than-air craft to fly on Mars. I don’t know how many people at NASA follow Sky Lights, but if you’re still looking for a name, Kitty Hawk would be appropriate.

Thought my post was done, but this just in: Dragonfly was approved on June 28 and is scheduled for launch in 2026. This helicopter will fly on Titan, the largest moon of Saturn. The aerodynamics are somewhat different, since Titan’s atmosphere is 50% more dense than Earth’s, but that’s a good thing. Temperatures on the surface, however, are -179°C (-290°F) — much colder than Mars. Nevertheless, NASA engineers say Dragonfly is ready to soar.

Next Week in Sky Lights ⇒ How Weather Is Predicted

Q&A: How the Jet Stream Affects Weather
Q&A: How Weather is Predicted
HOME