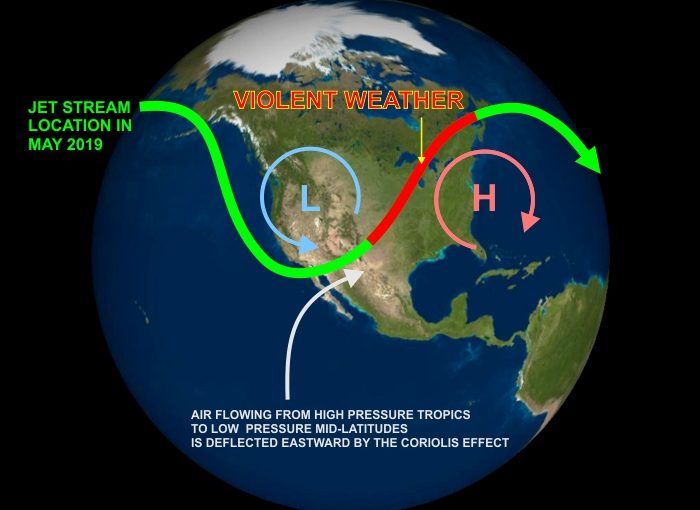 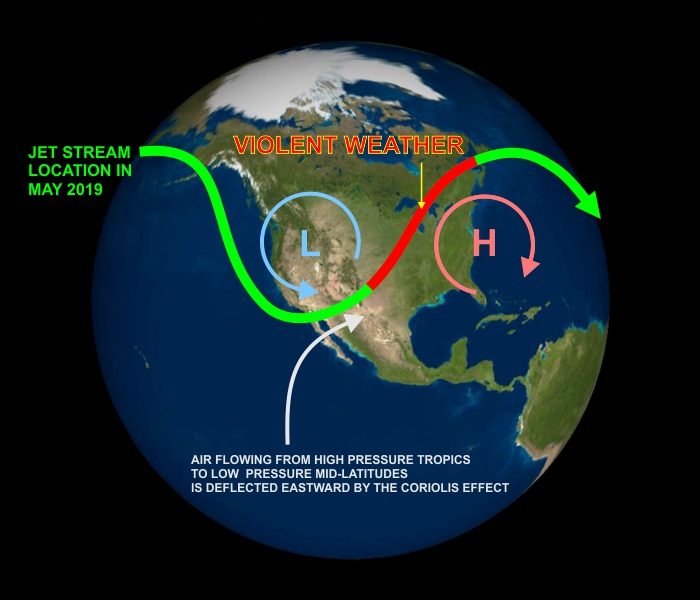 Question: That was some really strange weather we had in May. The weatherman kept talking about how it was caused by the jet stream but didn’t really explain the connection. Can you help? — TK, St. Louis, MO

Answer: Absolutely. The graphic above shows what the jet stream was doing in May of 2019. It got “stuck” in this position for several weeks. Normally, the jet stream is centered around the US/Canada border, and undulates with an amplitude (north-south excursion) of less than a thousand kilometers. During May its amplitude was 3–4 thousand kilometers. The reason it got “stuck” was an unusually strong high pressure system stalled over the eastern US.

Before proceeding, here’s some background on the jet stream. The jet stream (aka polar jet) is a “river” of fast-moving air at an altitude of 9–12 km (30,000–39,000 ft). The stream is typically a few hundred kilometers wide, and around 5 km deep. Air in the jet stream moves with a speed of 100–400 km/hr (50–250 mph). There’s a jet stream in the southern hemisphere too, but it circles Antarctica and flows mostly over water so you don’t hear much about it.

Both jet streams are caused by the tendency of warm, higher-pressure tropical air to expand and move away from the equator. This movement manifests as winds blowing initially to the north and south. The Coriolis force acts on this moving air and deflects it to the east. Because this happens around the entire circumference of Earth, the combined effect of all this deflected air is the formation of jet streams at the boundary between polar air and the rest of the atmosphere.

The undulating pattern of the jet stream (known as a Rossby Wave) has its own motion, generally west to east, much like a positive phase shift. You can see an excellent animation of that done by NOAA here. The motion of this wave is gradual, and its drift speed, driven by temperature differences, varies depending on season. In fact, it can sometimes stall out or even drift westward. In May 2019, it stalled out for several weeks in the position shown above.

The violent weather in the central US was caused by cold dry arctic air (normally sequestered farther north) colliding with warm humid air from the mid-Atlantic. That’s a recipe for extreme storms, high winds, hail, and tornadoes. The situation was exacerbated by unusually high levels of humidity in the Mid-Atlantic air, which in turn was caused by warmer oceans and increased evaporation of seawater.

The result was that strange weather you asked about. Tornadoes were reported somewhere in the US for 14 days in a row — the longest streak on record. There were close to 500 reports of tornado sightings during May. In the hardest-hit areas, hail the size of apples fell from the sky.

In the western US we had unseasonably cool weather. Snow fell at the Grand Canyon in Arizona, accumulating to a depth of 5 cm (2″) on the North Rim. In the southeastern US, a heat wave brought record-breaking triple-digit temperatures to several cities. Weather was weird all over the country.

So is this the new normal? While it’s true that the jet stream can influence weather, it’s also true that weather can influence the position of the jet stream. Climate models can’t say for sure if global warming will make these “stuck jet stream” scenarios more likely or less likely. But what they can tell us is that, when a jet stream does stall like this, the weather where the two air masses meet is likely to be more violent.

Next Week in Sky Lights ⇒ Drones on Mars

Q&A: The Day Lasts Longer on a Mountaintop
Q&A: Drones on Mars
HOME