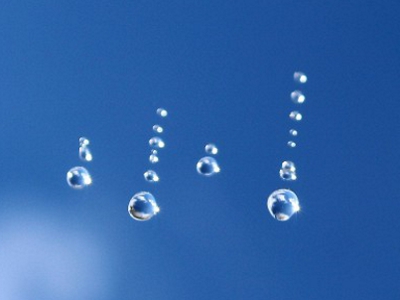 These are two photos of the same rainstorm. At left is the view to the south, at right the view to the west. The Sun is behind the clouds in the right frame, about an hour from setting. Aesthetically, the interplay of light and shadow is striking. Scientifically, it’s a nice example of how water can be both transparent and opaque.

Clouds in the left frame are brightly illuminated by direct sunlight. The Sun is low enough in the sky for its light to slip under the cloud deck, so falling rain can be seen as that wide bright streak below the clouds.

On the right, from our perspective, the Sun is behind the clouds and rain. We’re seeing the unlit side facing the camera. It’s difficult for light to penetrate clouds — most of it gets reflected (which is why clouds are white). All the non-white colors of clouds are either shadow effects as seen above, or are produced by refraction of sunlight. For more on that, see my post Why Clouds Have Colors.

It’s also difficult for light to penetrate rain. Notice how dark the rain looks in that right frame. This might seem surprising at first, since rain is fresh water, and water is about as transparent as things get. Though it’s true that calm water can be transparent to great depths, falling rain has different optical properties.

Raindrops, being discrete randomly-distributed particles, present a significant barrier to light. They’re hundreds of times larger than the drops that make up clouds, and although they’re individually transparent to light, light that enters them gets refracted and changes direction. Any given ray of light will suffer multiple encounters with drops, increasing the divergence from its original direction of travel. The cumulative effect is that the column of falling rain is opaque, and thus casts a shadow. My camera happened to be in that shadow.

When light hits a raindrop some of it also gets reflected, same as when light hits a window. This is why the rain in the left frame appears brighter than the background. Hypothetically, if you could zoom in on that rain with a super-powerful telescope and examine the individual raindrops, you’d see something like this:

Those falling drops were imaged with high-speed video capturing thousands of frames per second — essentially freezing their motion. The Sun was behind the camera. Every drop shows a reflected 180° image of the partly cloudy sky, with the Sun just below the cloud at 4 o’clock.

Q&A: Why You Can't Just Be Shot Into Space
Q&A: The Mississippi River Flows Uphill
HOME