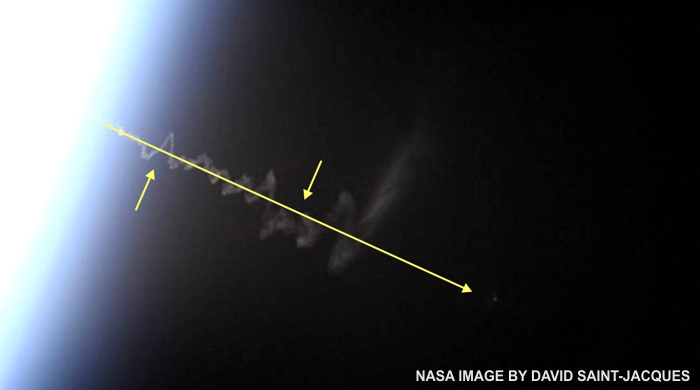 Question: I saw this photo on Space.com that showed the exhaust trail of a cargo ship heading for the International Space Station. But it looked like the ship was out of control, with the exhaust zig-zagging all over the place. I heard they made it safely, but what exactly was the problem? — WB, Santa Fe, NM

Answer: There was no problem. They aced the mission. But before I answer your question, here’s some background on that mission. The rocket was launched from the Baikonur Cosmodrome in Kazakhstan on Thursday, April 4. The payload was a Progress MS-11 cargo spacecraft carrying supplies for the ISS, including:

After delivery, outgoing trash from the ISS is loaded onto Progress. It can haul away up to 1600 kg of solids and 400 kg of liquid waste. This spacecraft lacks heat shields and is designed to burn up on reentry incinerating all components. The image above, taken by Canadian astronaut David Saint-Jacques onboard the ISS, is the one to which you refer (minus the yellow vectors). Earth is the bright blur on the left, overexposed to show the fainter exhaust trail. Below is a close-up photo of the Progress craft just before docking with the ISS: 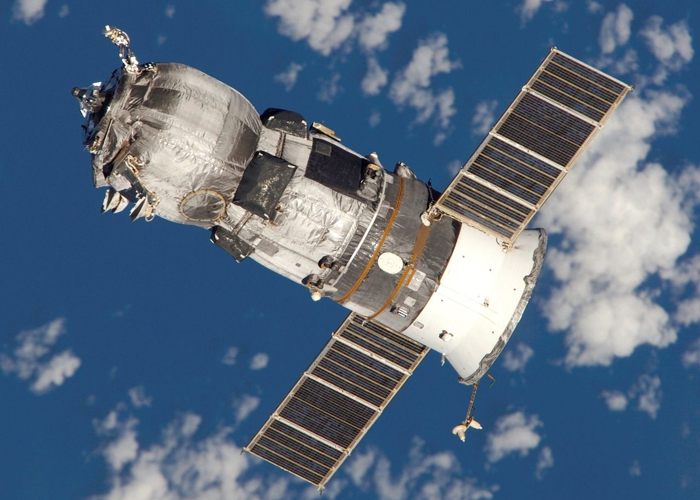 The rocket was a Soyuz-2.1a, burning RP-1 (highly refined kerosene) and LOX (liquid oxygen). This mix of fuels produces thick exhaust trails that persist for several minutes. In comparison, the LH2 (liquid hydrogen) and LOX fuel mix used by other rockets leaves a nearly invisible trail. The thrusters on Progress use a hypergolic fuel, composed of hydrazine and nitrogen tetroxide. These thrusters are usually fired in short bursts during final maneuvering, hence they don’t create much of a trail.

So to answer your question, no, that wavy trail of smoke was not the path of the rocket. From the perspective of the ISS the rocket would appear to follow an almost perfectly straight line (long yellow vector). If you look closely you can see Progress as a small point of light off the tip of that vector. What’s distorting the (initially straight) exhaust trail is wind shear. You often see the same effect with meteor trails, though meteors are traveling in the opposite direction.

The initially straight exhaust trail is pushed in different directions in at least a dozen places. I’ve marked the two most obvious undulations with small yellow vectors indicating wind direction. Winds almost always blow in different directions at different altitudes. That’s the trick to “steering” a hot air balloon. See my April 9, 2012 post to learn more about that.

Of note in the top image: Since the photo exposure was set to capture a faint exhaust trail, the brighter Earth is overexposed. The blue haze of Earth’s atmosphere is seen in cross-section. The visible top of the atmosphere is around 100 km, near the base of the thermosphere, where the atmosphere stops behaving as a continuous medium and no longer effectively scatters light. Still, even in this rarefied atmosphere there are still winds and sufficient drag to distort the exhaust.

FYI, 100 km is also the altitude of the Kármán Line — the official international definition of “where space begins”. At this altitude engines are no longer needed and you can “coast” the rest of the way to your target. In this case, the exhaust trail of the rocket continues well beyond that altitude since additional acceleration was required to reach the orbital altitude of the ISS (330–435 km).