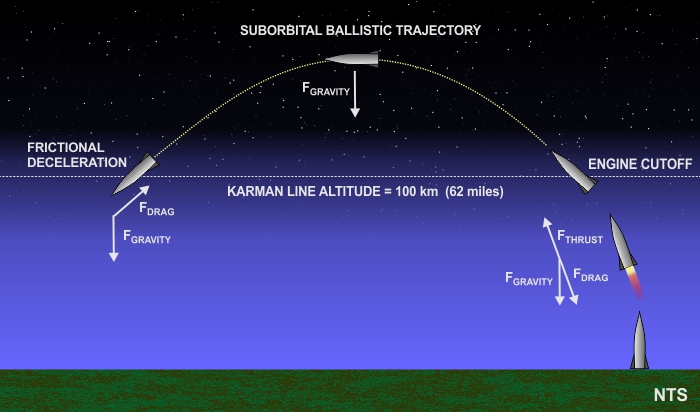 Question: I’ve read lots of articles about how “space tourism” is going to be the next big thing. It’s too pricey for me right now, but I think it would be a cool experience. What I don’t get is the weightlessness part. If you’re just going up and down, and not really orbiting the Earth, how does weightlessness happen? — RB, Necker Island, BVI

Answer: I get a lot of questions about weightlessness, so I know there are some common misconceptions about the phenomenon. That’s not surprising, since you need at least high school level physics to really understand why weightlessness happens, and only about 20% of students take that course.

So if you’re ready for a not-so-brief lesson in physics, let’s answer the question: Why do passengers on a suborbital flight experience weightlessness? We won’t need any math (as long as you trust my numbers), but we have to start with some basic ideas and build from there.

Let’s start out by dispelling the two most common misconceptions. Weightlessness is NOT caused by …

What is required to experience weightlessness is a state of free fall — motion in which the only force acting is gravity. There can be no friction forces, no thrust from engines, no lift from wings. In practice this is difficult to achieve. Even in the ISS there are small forces from residual atmospheric drag, shifts of mass within the structure, docking spacecraft, and thermal expansion. This is why the term microgravity is often used instead of weightlessness. While in a state of free fall, objects follow a path called a ballistic trajectory.

Microgravity can also be experienced in a rapidly plummeting aircraft, elevator, or amusement park ride, and during the first few seconds of a high-altitude sky dive. But it never lasts for long.

The graphic above shows why a suborbital flight (one that doesn’t go all the way around the Earth) will nonetheless be in free fall for at least part of its journey. The white vectors indicate the forces acting during important stages of the flight. The Karman Line is the altitude above which it is impossible to sustain aerodynamic flight — wings can’t generate lift in air that thin. At this altitude rocket engines are required for maneuvering. Of course, a suborbital flight doesn’t need to “maneuver” — all it needs is sufficient momentum to maintain its ballistic trajectory.

In the 16th century, Galileo did experiments involving falling objects dropped from the same height. What he found was: Regardless of weight, all objects fall at the same rate and reach the ground simultaneously. This established what is now called the Law of Free Fall.

The effect of air drag can mask the operation of this law. If you drop a feather and a hammer they obviously won’t hit the ground at the same time. But as astronaut David Scott demonstrated during the Apollo 15 lunar mission, in the airless environment of the Moon they will fall at the same rate. Here’s a video of his experiment:

If the rocket, passengers, and objects in the cabin are all falling at the same rate, then nothing will gain or lose on anything. The relative positions of objects in the rocket will not change (unless you push on them). This is why free fall ⇒ weightlessness.

Watch this NASA video from the ISS and consider that this is also a state of free fall. The ISS follows a nearly-circular orbit at an average altitude of 380 km (240 miles). The only force acting is gravity, so an orbit is also a ballistic trajectory. The difference is the ISS has a speed around 7.5 km/s, compared to the 1–2 km/s needed for suborbital flights. This higher speed allows it to keep falling under the influence of gravity, but never get any closer to Earth.


If that last sentence sounds paradoxical, consider that the only force acting on the ISS is gravity. It has engines that allow it to maneuver slightly, but they’re only used as needed and are normally off. Gravity at that altitude is only 10% less than at the surface. The ISS has a mass of 417,289 kg so gravity pulls it down with a force of 3.64 million newtons (437 tons). There’s nothing resisting this force so the ISS must fall.

It takes about 4.6 minutes to fall 380 km (neglecting air drag). But here’s the trick to an orbit — by the time the ISS falls those 380 km, it’s high tangential speed will have carried it 2100 km horizontally. It will indeed fall 380 km, but it will “overshoot” the Earth and thus never get any closer than 380 km. Unlike suborbital flights, the weightlessness never ends.

If you really want to understand orbits, and you’d like to support Sky Lights, you can find a full explanation with all the math and four supporting animations here:  The Science of Orbits.

Passengers on commercial suborbital flights by companies like Virgin Galactic, SpaceX, and Blue Origin can expect 5-10 minutes of microgravity during their 2–3 hour flight. A ticket will cost you around US$250,000 as of this writing, but fares will decrease as the space tourism industry evolves. Once space tourism is fully commercialized, fares are predicted to drop as low as US$20,000 — about the price of a luxury cruise.

Next Week in Sky Lights ⇒ Far Side of the Moon

Q&A: Graupel
Q&A: Far Side of the Moon
HOME