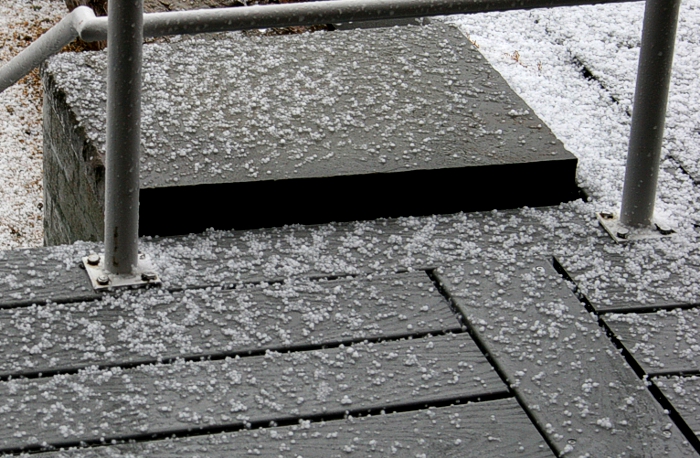 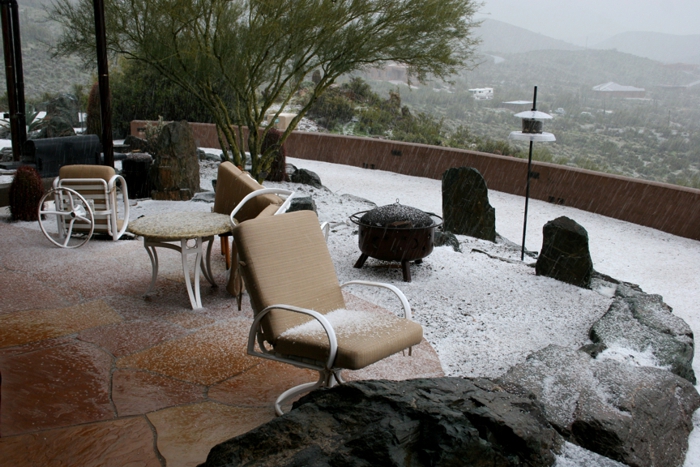 Question: That was one wild storm that came through here last week. And I learned a new word watching the weather report: graupel. I thought it was hail. The weatherman said graupel was “like a cross between hail and sleet” but that doesn’t tell me much. I found it on Wiki but couldn’t understand their explanation. Hoping you could explain it better. What is graupel and what makes it happen?  — DD, New River, AZ

Answer: Greetings neighbor. Yes, it was quite the storm. Unprecedented in the 20 years we’ve lived here. We see snow in the air maybe once every two years, but it melts pretty fast on the ground. We get hail usually once every monsoon season — largest so far around 1/2″ diameter. This is only the second time we’ve seen graupel. And we got nearly an inch of it. Took 24 hours to fully melt. The top image shows what my front patio looked liked after the storm.

Below is a photo of Gavilan Peak just east of my home. I have dozens of posts featuring images of that mountain, but none show it like this. From a distance it looks to be covered with patches of snow.

The image below shows a close-up of the graupel on my deck. Notice how it clumps together more so than hail. And it doesn’t bounce like hail when it hits. More like it “splatters” and flattens. It’s also a lot less transparent than hail. All of these characteristics are a consequence of the unusual atmospheric conditions that led to its formation.

Rain is rain, but winter precipitation comes in a bewildering variety of forms with names some people have never heard. Here’s a comprehensive list:

Technically, hoarfrost and rime are not precipitation because they don’t “fall” from the sky. Hoarfrost forms by the process of deposition (the opposite of sublimation). Water molecules go directly from the invisible gaseous state to the solid state, most often growing as spiny crystals on leaves and thin branches of outside foliage. Hoarfrost can also form on overhead power lines, clothes lines, or antennas. For hoarfrost to form, the air must be near its dew point, and the temperature of the substrate must be below freezing.

Rime is formed in a similar process, except the source of water is liquid micro-droplets suspended in the air — it’s basically fog hitting a cold surface and freezing to it. Instead of getting the delicate crystal growth of hoarfrost, you get an amorphous (granular) coating of ice built up layer by layer.

Now graupel (aka soft hail, snow pellets, snow grains) is the odd duck. It starts out as snow, then partially melts as it falls through a warmer layer of air. Next, in a lower colder layer of air, the flake gets coated with rime. The lower layer of air must have high humidity and near-freezing temperatures. Rime is amorphous, so graupel is not as transparent as hail. And because it has a “fluffy” snowflake core, it’s not as hard as hail and rarely bounces on impact. It tends to clump more than hail because it’s softer, and the rime coating is stickier than hard ice.

So we had graupel here in New River, but in other parts of the “Valley of the Sun”, depending on elevation, there was snow, hail, or rain. And fog was everywhere. What type of precipitation appears at ground level depends strongly on the humidity and temperature of the air layers that precipitation falls through.

If you like playing with simulators, and want to create your own weather, check out Precipitation Simulator. It lets you vary the dew point and temperature of the atmosphere within four separate layers. I’ve been able to create small amounts of graupel (called snow grains on that website) but nothing like we experienced.

Weather terminology can be confusing. Have you ever wondered about the difference between “partly sunny” and “partly cloudy”? The National Weather Service (NWS) provides a comprehensive glossary of meteorology terms. It isn’t Wikipedia, but it’s a great place to start if you have any weather questions. Your tax dollars at work.