I recently read the following, excerpted from an article on AntarcticGlaciers.org:

Glaciers, it turns out, don’t just alleviate sea-level rise by freezing water and keeping it out of the ocean. Their gravity fields are strong enough that they actually attract ocean water from elsewhere on the planet. The farther you go from a certain patch of glacier, the greater the gravitational effects — and West Antarctica is very far from the United States. So the Thwaites and Pine Island glaciers essentially swaddle themselves with water that would otherwise slosh against the beaches of the East Coast.

If West Antarctica’s ice melts, and it loses mass, then its gravitational field will also lose its attractive power. And North America will suffer the consequences. For example, for every bit of West Antarctic ice that tumbles into the sea, sea levels in Boston will bear an additional sort of gravity tax of 25 percent. For every centimeter of sea-level rise from ice melting in West Antarctica, Boston gets one and a quarter centimeters. And that extends down the East Coast.

This surprised me, as I’d never considered the gravitational effect described. Being the curious type I decided to run some numbers. Here’s the relevant data:

That volume of ice, if completely melted, would cause a rise in sea level of around 58 meters (190 feet). See my June 18, 2018 post for more on that. What the AntarcticGlaciers.org article claimed is that the actual sea level rise along the US east coast would be 25% higher at 72 meters (238 feet). That seemed like more water than could be held back by the gravity from a glacier.

To investigate this claim, we’ll first need to calculate the total mass of Antarctic ice:

Next, for simplicity, we’ll assume all this ice is in a single glacier 2000 km long, 2000 km wide, and 5 km thick, This is close to the scale of existing glaciers if all the ice were packed into one slab. This mass of ice produces a gravitational field at the glacier’s leading face of:

This gravitational pull would be exerted on the oceans in a horizontal direction, attracting water toward the glacier and causing it to “pile up” around the glacier’s leading face. The graphic exaggerates this effect, but it’s enough of a pileup to significantly contribute to sea level rise should the glaciers melt. Loss of this gravitational force would cause the ocean to re-level itself.

Here’s how we can make this effect quantitative. Earth’s normal gravitational field has a strength of 9.8 N/kg acting in the vertically downward direction. The horizontal gravity from the glacier effectively “tilts” what is normally level by an angle of:

That is, the direction of “down” is shifted 0.017° away from the normal vertical. But this shift is calculated for a location just outside the glacier. The force of gravity decreases with distance in an inverse square manner. At the distance of the US east coast (15,000 km) the glacier gravity would be reduced to:

That small tilt, if extended back to Antarctica, would raise the sea level there by

Which means that, if the ocean surface were re-leveled, sea level would drop by 5.8 m in Antarctica, and rise by 5.8 m on the US east coast. That’s only 40% of the 58 m → 72 m increase predicted in the AntarcticGlaciers.org article. Fact is, as you approach Antarctica and get into stronger glacier gravity, the slope of the ocean increases from 0.000042° to 0.017°, and the amount of water piled up increases. I’ve shown that in the graphic at top.

That extra water will increase the 5.8 m sea level rise predicted by my simplified model. Whether it would make up for the rest of the 14 m predicted by AntarcticGlaciers.org requires calculus — which I try to avoid unless absolutely necessary. Suffice it to say that, based only on my simplified model, I’m convinced glacier gravity is a significant factor in projections of rising sea levels.

Of course, the glacier gravity doesn’t wrap around the curved surface of the Earth and pull horizontally on the water off the US east coast. In fact, with Antarctica near the antipode of the east coast, gravity from its glaciers pulls downward (through the Earth) on those coastal waters. Thus, my model is kind of a “flat Earth” simplification, but since water also has mass (and gravity) the curved ocean surface that starts at the glacier would indeed extend around the curve of the Earth.

As an interesting side note — several companies manufacture instruments that can measure the small variations in gravity we’re talking about. The devices are called gravimeters and they’re sensitive enough to detect the gravitational field of a large building. Their primary application is in the oil/gas/mineral industries, where they’re used to detect underground deposits by sensing gravitational anomalies. Shown below is a model FG5-X gravimeter from by Scintrex, a Canadian engineering company. 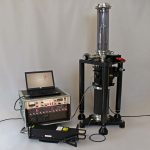 Next Week in Sky Lights ⇒ Give Thanks for Earth’s Atmosphere

Q&A: Water on the Moon
Q&A: Give Thanks for Earth's Atmosphere
HOME