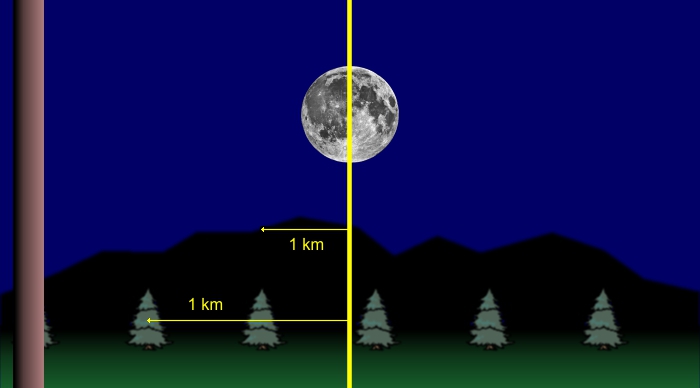 Question: We were returning from my grandparents’ house last night and there was a Full Moon just above the mountains. My dad was driving and I was in the back seat, so I was able to watch for a long time. I could see the mountains and trees and telephone poles going past, but the Moon stayed in the same place … like it was following us or something. It was kind of eerie. How does the Moon do that? — JR, Denver, CO

This is a common illusion — I first noticed it sometime in middle school. When I asked my dad why it was happening he said (and I paraphrase) “It isn’t really following us. It just looks like that because it’s so far away.” Technically, his answer was correct. But it wasn’t until many years later that I understood why.

You saw how the distant mountains moved the slowest. The trees were closer and moved faster. The telephone poles were closest and zipped by with the greatest speed. Of course, these are apparent speeds — you’re the thing that’s actually moving. My animation shows this illusion and, though the details may differ, it is geometrically equivalent to what you saw that night.

The apparent speed (V) of an object is inversely proportional to its distance (D) from the observer. To compare the apparent speeds of two objects (A and B) at different distances we can use:

There’s no way you’d notice such a gradual motion with your eyes. Now if you were observing the Moon through a telescope and had a crater centered in your view, you’d see it moving to the right relative to the cross-hairs. The apparent motion would be very slow but it would be visible.

Technically, apparent speeds are angular speeds because they measure motion across an observer’s field of view (FOV). For humans, the FOV is about 45° (not counting peripheral vision). The angular speed is thus:

So apparent speed is a measure of how fast something appears to be moving. In contrast, the relative speed of any fixed external object would be the negative (opposite) of your car’s speed. Relative speed is useful for understanding the changing positions of multiple objects moving at different speeds. For an example of this see my Jun 11, 2018 post: More Things Moving Backward.

Here’s another way to look at apparent speed. If you draw a vertical line on the car window (below), you can watch how long that line takes to pass a distant object. To keep things simple, let’s say your car is moving at 1 kilometer per minute (37 mph). That means the line on your window needs to pass 1 km of telephone poles every minute, 1 km of trees every minute, 1 km of mountains every minute, and 1 km of Moon every minute. Because of perspective, 1 km looks smaller at greater distances. The 1 km vector for the trees and mountains are shown to approximate scale. The 1 km vector for the (3475 km diameter) Moon is hidden in the thickness of the vertical line.

Coincidentally, a few weeks ago, the newspaper cartoon Baby Blues ran a strip about this Moon illusion. It was funny, but the laugh was at the expense of two gullible children: http://babyblues.com/comics/october-21-2018/

If you’re a parent of a precocious kid who constantly asks “Why?”, do them the favor of providing an honest answer — even if it’s “I don’t know, let’s look it up.” That’s easy enough to do with online access, and it’s an opportunity for both of you to learn something new.

Q&A: How the Sun Got Its Name
Hexagonal Time Machine
HOME