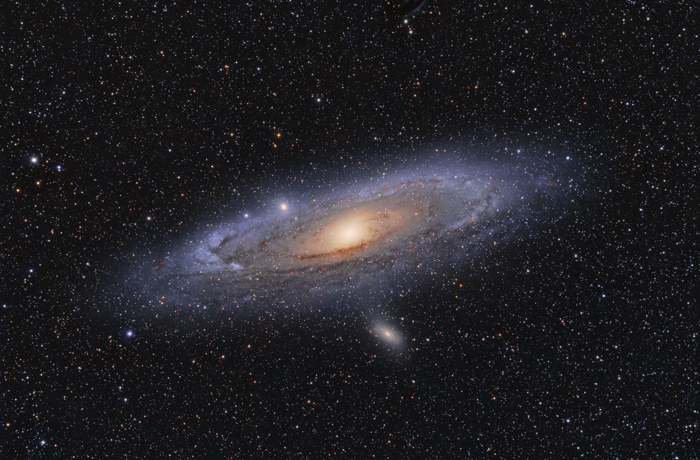 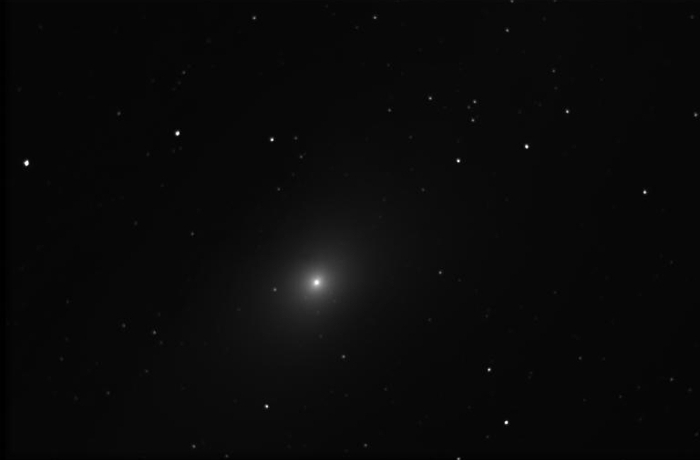 Edwin Hubble, widely regarded as one the world’s greatest astronomers, started work at Mt. Wilson Observatory in the early 1920s. His arrival coincided with completion of the Hooker Telescope — the world’s largest at the time with an aperture of 2.5 meters (100 inches). Later, he was first to use the 5 meter Hale Telescope at Mt. Palomar.

Astronomers had long studied what are called Messier Objects, a numbered list of 110 celestial objects compiled by French astronomer Charles Messier in the latter part of the 18th century. None of them appeared as single star-like points of light. Rather, they were extended objects originally hypothesized to be clouds of gas (nebulae) within our own Milky Way galaxy. The image above shows the object Messier labeled M31. It’s been intentionally blurred to simulate how it appeared in telescopes of Messier’s era.

By Hubble’s time, astronomers were mapping our galaxy and believed the Milky Way was the Universe. What Hubble saw when he observed M31 with the Hooker Telescope was more like the image below (but not quite this good). M31 had a distinct structure showing it was more than just a cloud of gas. In fact, it looked much like what astronomers imagined the Milky Way would — if seen from the outside.

Hubble’s “eureka moment” hit when he measured the distance to this object. The Hooker Telescope could resolve individual variable stars within M31. Variable stars have a repeating bright-dim cycle that can be related to their distance. Although there was a fair amount of uncertainty in his calculation, Hubble found M31 to be some 2.5 million light years (LY) distant. Other Messier Objects were even more remote. By comparison, the estimated diameter of the Milky Way was only 100,000 LY. Hubble concluded M31 must be another galaxy far outside the boundaries of our own.

With that single calculation the Universe became vastly larger than previously thought, and the Milky Way became just one of many galaxies in the cosmos. We now know the visible Universe contains 100–200 billion galaxies, a number extrapolated from the Hubble Space Telescope (HST) deep field images.

70 Messier Objects were revealed to be galaxies or globular clusters located outside the Milky Way. Of the other 40, most are indeed clouds of gas within our galaxy, and a few are nearby groupings of stars.

In 1929 Hubble had another “eureka moment”. He was comparing speed measurements of distant galaxies (obtained by Vesto Slipher et al.) with his own distance measurements, and spotted a correlation: The more distant the galaxy, the faster it is receding from us — the Universe must be expanding. Many astronomers of his era thought the Universe must be static and unchanging as a whole. Others believed that configuration would be unstable, since all matter gravitationally attracts all other matter. For more on that debate, see my Oct 10, 2016 post. The puzzle was (mostly) resolved by Hubble’s discovery, which provided strong evidence for the Big Bang theory.

Science often proceeds in fits and starts, advancing only incrementally. But occasionally there are “eureka moments” when a single observation changes everything. Edwin Hubble’s discovery of a Universe beyond the Milky Way was one of those.