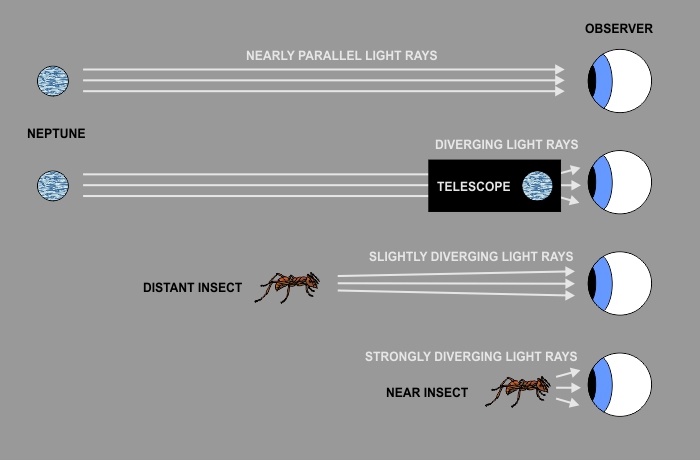 Question: I had a microscope on loan from school for a home science project. Out of curiosity, I tried using it to magnify the Moon. I just held it up and aimed the lens best I could. I did see a really bright light but could not bring it into focus. I’m guessing what I tried is impossible, right? — WT, Fargo, North Dakota

Answer: Yes, that would be impossible. Same as if you tried to magnify an insect using a telescope (unless that insect was very far away). At first thought it seems this might work, since both devices make small things look larger. But I tried your experiment myself back in grade school and got the same results. The problem is, there are different senses of “small” here — some things (like insects) really are small, and some things (like planets) only look small because they’re so far away.

To really grasp the difference you’d have to understand ray diagrams and real and virtual images, and that’s at least high school physics, so I’ll keep this explanation simple. The graphic shows the optical difference between an insect and a planet. Neptune is so far away (4.7 billion km at its closest) the light rays from all parts of that planet are nearly parallel. Even though the planet is many times larger than Earth, the beam of light it transmits to your retina makes a spot so small that all you see is a point of light, like a faint star. The function of the eye’s lens (when it’s healthy) is to focus parallel rays to a point.

Opticians use the following approximation for human eyes: An object with an angular size of 1′ (arcminute) casts an image 5 μm wide on the retina. Neptune’s average angular size = 2.3″ (arcseconds), so the point of light on your retina would be about 0.2 μm in diameter. The rods and cones in your retina have diameters from 0.5–4.0 μm, so only a single photoreceptor would be activated by the unmagnified image of Neptune. You would see essentially a point of light.

The lens of your eye projects an image of what you’re looking at onto the photosensitive surface of your retina. Optometrists routinely project images (e.g. circular rings of laser light) onto the retina and can see and photograph that image — the retina functions like a tiny projection screen, the eye’s lens like a projector. The size of that image depends on the divergence of the light rays, that is, at what angle they spread out as they pass through the eye’s lens. The greater the divergence, the larger the image on the retina, and the larger the object appears. A telescope radially stretches the incoming bundle of parallel rays so when they diverge through the eye’s lens you get magnification.

Note that the graphic is not a true “ray diagram” since it omits interaction with the eye’s lens and doesn’t show the geometry of image formation. Rather, it’s more a schematic diagram showing how apparent size changes, and why some things look big and other things look small.

For example: An insect crawling toward you appears to get larger. Expressed less subjectively, light rays from the insect become increasingly divergent as it approaches your eye, and the insect’s apparent size increases (graphic). We all learn to estimate a familiar object’s distance by its apparent size. This is why, when something like a car’s curved rearview mirror reduces apparent sizes, we need to be reminded that “Objects in mirror are closer than they appear.”

Microscopes also increase the divergence of light rays, but they’re designed to start with rays that are already strongly divergent. If you feed a microscope nearly parallel rays it won’t be able to bring them into focus. The light will get through, sure, that’s what you saw, but it won’t form a focused image of the Moon on your retina.

An interesting related question is: How do we know whether a given object really is small, or just looks small because it’s far away? Your thumb at arm’s length will just cover the Full Moon, but you know the Moon is larger. We learn how to make this distinction as infants, as we observe and remember the apparent sizes of common objects seen at different distances.

For new and unknown objects, the eye-brain system picks up several cues that help us distinguish whether the object is close and small or large and distant. Those cues include:

The eye-brain system is truly remarkable in its ability to adapt to, and learn from, novel input. But it can be tricked, as we’ve learned from the study of optical illusions.