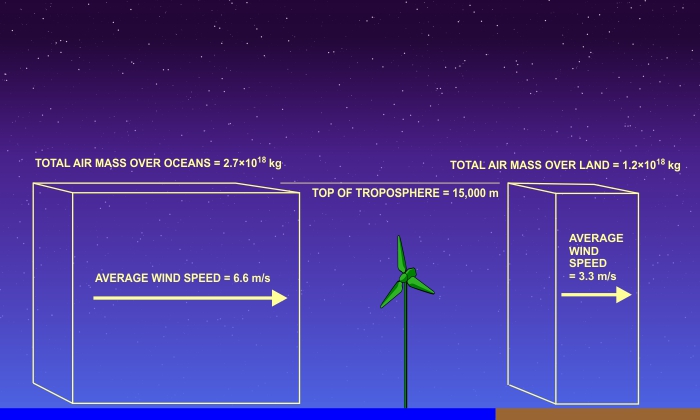 Question: I understand why we need to move away from fossil fuels to renewables like solar and wind energy, as my country is doing. But I have to wonder if using TOO much wind energy could deplete this resource. I mean, it seems obvious that if you extract energy from the wind with a windmill, the wind has to slow down. Like anyone, I enjoy a calm day, but we need wind for things like pollination of plants, sailing boats, dispersing pollution, jet streams, etc. Is it possible that we could ever run out of this resource? — JT, Holstebro, Denmark

Answer: Not to worry JT. First, I commend Denmark for its commitment to renewables, and I regret the USA doesn’t have a similar program. The short answer to your question is: We will never run out of wind energy because it is being continuously renewed by solar energy.

Wind is created by the uneven solar heating of Earth’s surface. Warmer areas develop higher Pressures according to Gay-Lussac’s Law of gases:

P = kT (where T is the absolute temperature and k is a constant that depends on the type of gas, density, humidity, etc.).

So as the air temperature increases, its pressure also increases. Higher pressure air will expand to equalize its pressure with surrounding low-pressure regions, and this expansion is what creates wind. Greater pressure differences result in stronger winds.

The total solar energy absorbed by the atmosphere is around 3.9 x 1024 J/year. Of course, not all that energy goes into creating wind. Some of it ends up as wave energy, some goes into evaporating water, some is degraded to low level heat by surface friction and turbulence, some drives photosynthesis, some powers photovoltaic arrays, and some gets radiated back into space. But there’s still a huge amount of solar energy that ends up as wind.

The global average wind speed 10 m above the ocean surface is measured to be 6.6 m/s. Over land, where there’s more friction, the wind speed is reduced to 3.3 m/s. The actual speed distribution is highly nonuniform, seasonal, and generally varies with altitude. The graphic below shows NASA data for the global average wind speeds 10 m above the surface (about the height of a serious wind turbine) for the decade spanning 1983-93. Click to enlarge. 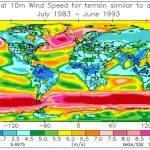 Any moving mass has kinetic energy EK = ½mv2, where m = the mass in motion and v = the speed. To put a scale to the amount of wind energy in Earth’s atmosphere we’ll make a few simplifications:

This is the simplified model shown in my top graphic. It allows us to calculate the total amount of wind energy available for harvesting from the troposphere, at any instant, across the globe:

It’s interesting to do these calculations just to put things into perspective. There’s a lot of wind energy on this planet and the Sun keeps making more — about 10,000 times more than we extract in a year. Whatever wind energy we do harvest is replenished essentially instantly. Unfortunately, that is not the case for fossil fuels.

And so, JT, there’s no reason to worry about even reducing the supply of wind, much less exhausting it.

Next Week in Sky Lights ⇒ How Telescopes and Microscopes Differ