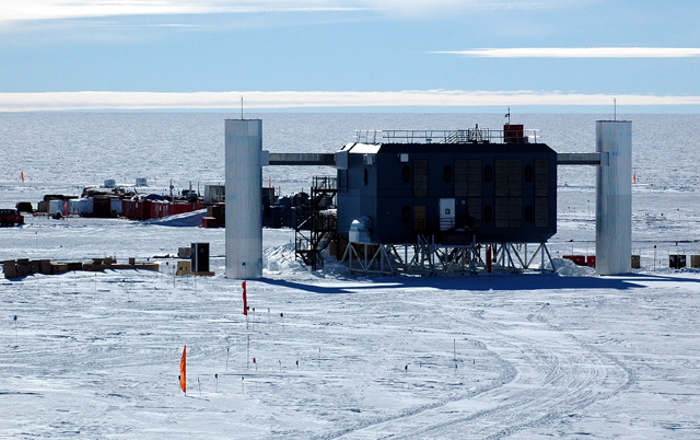 Question: I read about how something called IceCube just made an important discovery involving neutrinos, but the article didn’t provide many details. So what’s up with that? — TJR, Harshaw, WI

Answer: I can tell you what’s up, but first a little background. The unusual building shown above is the lab control center for IceCube, a neutrino detector built at Amundsen-Scott South Pole Station in Antarctica (photo courtesy of USAP). IceCube itself is much larger and lies below the surface. The instrument consists of 86 vertical strings of 60 detectors each, arranged in a 3D grid. The detectors were lowered into holes drilled in the ice to a depth of 2.45 km (1.52 miles). The graphic below shows a neutrino passing through this grid and activating two of the 5160 detectors. 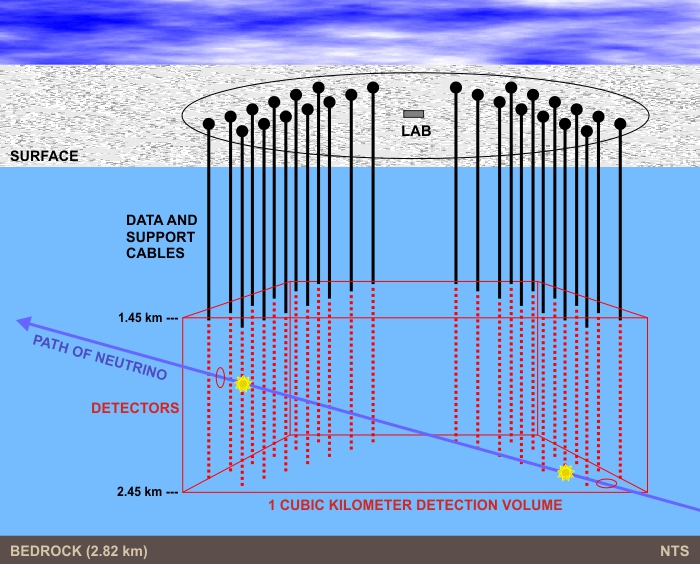 I omitted some details to make the graphic easier to follow. The array of detectors is actually shaped more like a hexagon than a circle. And the detectors fill the 1 km3 volume uniformly, where only four rows of detectors are shown here. The important idea is: When you have a 3D grid of detectors, and at least two of them are triggered, you can establish the path of the neutrino through 3D space because any two points define a line.

That path can then be traced back to the neutrino’s source. IceCube’s computers determined the celestial coordinates of the source within 43 seconds of detection. Those coordinates were promptly relayed to major observatories around the world, and telescopes of all types zoomed in for a closer look.

IceCube detected this neutrino on Sep 22, 2017. It triggered multiple detectors and thus established the direction of motion — a scientific first. Neutrino detectors have been around for decades but none before IceCube had sufficient spatial resolution to determine the neutrino’s path. With 1 km3 of very clear ice to interact with, the chance of a neutrino hitting a neutron or proton are greatly increased. When an interaction does occur, a small flash of light is produced and sensor(s) are triggered. Interestingly, neutrinos arrive from all directions — the solid Earth is no barrier to these elusive, weakly interacting particles.

Neutrinos are produced by very high energy events and move at nearly the speed of light. They have no electric charge, so they travel in essentially straight lines through space unaffected by electric or magnetic fields. Like photons of light, they can be deflected by gravitational fields but in most cases that deflection is insignificant. Thus, we can be fairly certain that whatever we see out in space in the direction the neutrino came from, must be that neutrino’s source.

What astronomers saw in that direction was a type of unusual galaxy called a blazar that, according to current theory, harbors an active super-massive black hole at its center. Energy released by matter falling into the black hole generates neutrinos and other forms of radiation generically known as cosmic rays. The source of cosmic rays had long been a mystery, since most are charged and get deflected as they travel through space. That makes it impossible to locate their source. The blazar (dubbed TXS 0506+056) was studied by a variety of instruments whose combined data finally confirmed blazars as a source of cosmic rays. The other source, confirmed in 2013, are supernovae (massive exploding stars). But supernovae alone could not account for the flux of cosmic rays typically detected. And that, in a nutshell, is the big deal.

This is yet another success for what is called multimessenger astronomy — learning about the universe through multiple data streams. Here’s a brief history of how that method evolved:

The more ways we can “see” a phenomenon the more clues we have to understand it. Could there be any other “messengers” beyond electromagnetic waves, gravitational waves, and neutrinos? We certainly haven’t exhausted the zoo of physical entities. For example, there is a yet-to-be-discovered particle that composes dark matter, but all attempts to detect it have failed. If and when the dark matter window opens, more questions will be answered and (as is almost always the case in science) even more questions are sure to be raised.

Next Week in Sky Lights ⇒ Wind Power is Inexhaustible

Q&A: What On Earth?
Q&A: Wind Power is Inexhaustible
HOME