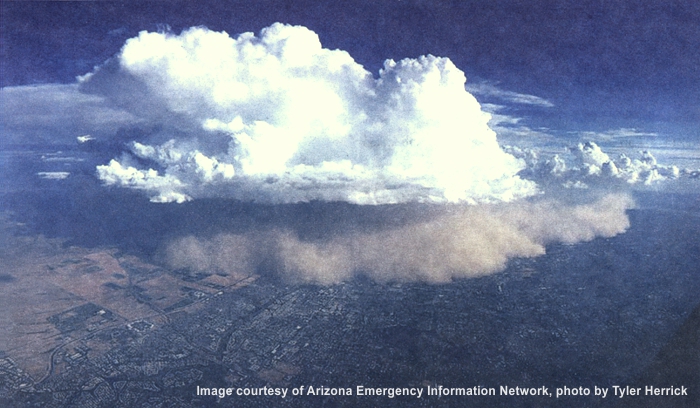 The above image was taken on August 21, 2016, during the peak of monsoon season here in Arizona. It shows graphically the vast scale of a haboob as it impinges on Phoenix. You are seeing a front of blown dust about 10 km (6 miles) wide being driven by downdrafts from a cumulonimbus cloud. The cloud tops out at an altitude of about 5000 m (16,000 ft).

The graphic below shows the meteorological components of a haboob. As warm humid air rises by convection to higher altitudes it experiences adiabatic cooling, and releases its moisture by condensation. The process of condensation (changing from water vapor to liquid water) releases latent heat in the amount of 2.26×106 J/kg (540 calories/g). This heat further warms the air and drives more convection that can create the towering clouds known as cumulonimbus.

The higher the air rises the more it expands and cools — at a rate of about 1 °C/100 m. The end result is denser air that is no longer buoyant. This dense air then falls downward, and can be accelerated further by drag from falling rain. When this falling air hits the ground (at speeds of up to 100 kph) it spreads out radially creating a microburst that can dislodge dry dirt and sand and carry them along in the rapidly advancing dust storm called a haboob. 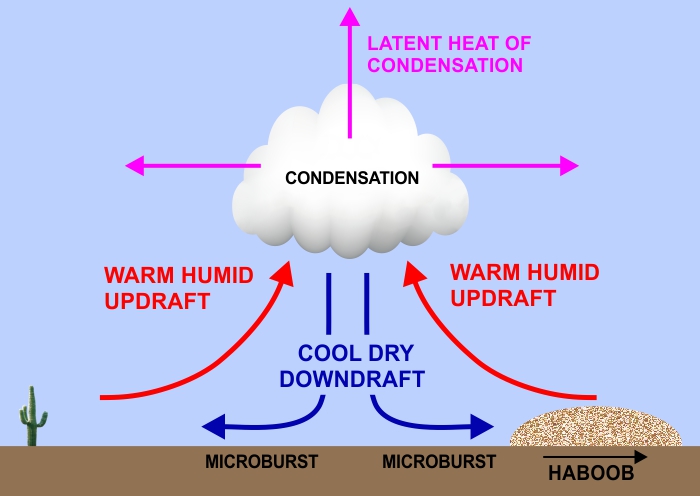 In 1978, shortly after we moved to Arizona from the Midwest (where vegetation stabilizes the soil), we experienced our first haboob. We were taking our dog for a walk to Roadrunner Park, 3 blocks from home. Suddenly we noticed a huge wall of brown dust looming in the sky. We weren’t sure what it was at first, but then we noticed it was getting closer. And windier. Whatever it was it didn’t look friendly so we headed back home. Within seconds we were hit by winds of 50–65 kph (30–40 mph) and blowing dust that reduced visibility. By the time we got home we were covered with sandy grit and our dog was sneezing. In that evening’s news we learned about haboobs.

Around 2000 we moved out of the city into the foothills north of Phoenix. We still get haboobs, but more often than not they decelerate and break up when they encounter elevated topography. Seen from the outside haboobs appear even more formidable. Check out my Aug 29, 2011 post for a video of a haboob from our current location.

Every locale has unique meteorology that contributes to violent weather events. Back in the Midwest it was tornados and blizzards. On the coasts it’s hurricanes and storm surges. In the desert southwest it’s heat waves and haboobs.

Had we known about haboobs, would we have moved to Arizona? Of course. Our beautiful winters more than make up for a few tough months in the summer. And haboobs don’t occur that often — just a few each monsoon season. They make it all the way to our elevation maybe once every 2–3 years. So I’ve gotten used to them, but to this day, when I see a haboob approaching, I’m still in awe of their size and speed.

Note to my readers: As I was writing a draft of next week’s post I noticed today’s post is #500. I just had to share that milestone. My thanks for your support, and for your continuing attendance in this virtual classroom. Sky Lights — satisfying your scientific curiosity since June 2004.