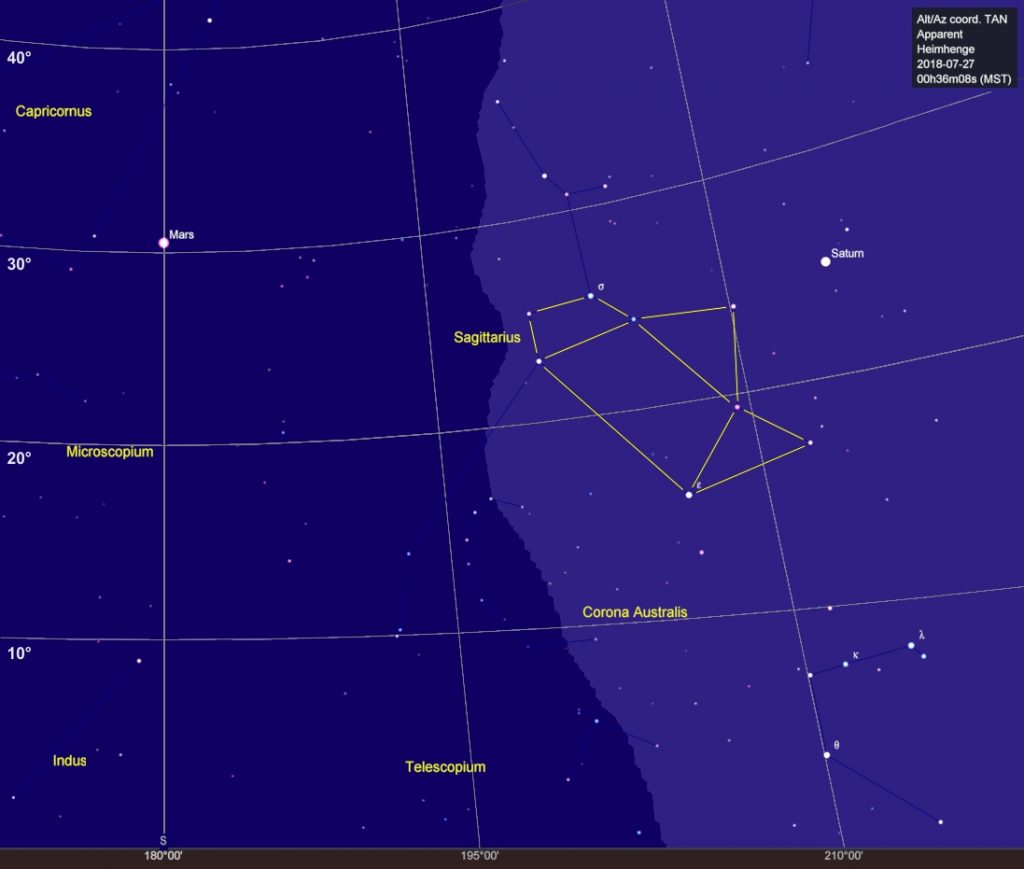 Planet Mars will reach opposition on July 26–27 this year, and this is no ordinary opposition — it’s a perihelic opposition, so Mars will be larger and brighter than normal and at a distance of “only” 58 million km (36 million miles). The last time that happened was in 2003. You should have little difficulty spotting this bright orange beacon, but you can click on the sky chart above for a larger version. Look for Mars just east of the “teapot” asterism of Sagittarius. This map was generated by the open source digital planetarium Cartes du Ciel.

The chart shows Mars in its best viewing position: when it’s highest in the sky and seen through more transparent air, and is above all but the worst light pollution. That occurs shortly after midnight when it will reach an elevation of 30.5° and shine at magnitude -2.18 — brighter than Sirius, the brightest star in the sky. Mars’ apparent size will be 24.3″ (arcseconds).

You won’t need to wait till midnight to see Mars. It rises in the southeast shortly after sunset, climbing higher in the sky as the night progresses. When it first appears it will be fuzzy, twinkling through the lower atmosphere, but as time passes it will grow brighter and sharper. Patience grasshopper.

LATE EDIT: Mars might stay “fuzzy” longer than expected. NASA now reports a dust storm covers 1/4 of the planet obscuring all but the largest surface features. Weather on Mars is difficult to predict. The dust storm might grow larger or dissipate by the time of opposition. Astronomers see dust storms almost every year on Mars, usually when the southern hemisphere is having summer. But every five (Earth) years or so, a dust storm grows large enough to encircle the entire planet. These storms can last from weeks to months.

The maximum elevation of Mars in the sky is a function of observer latitude. The 30.5° cited here is for my latitude of 34° N. At higher latitudes Mars’ elevation will be lower. Southern hemisphere observers have the best seat in the house.

Unless you have very good telescope, you won’t see all the detail shown in the graphic below. I’ve identified the major features that are visible in quality amateur scopes on a night of good seeing. Since Mars rotates once every 24 hours 39 minutes (that’s Earth hours and minutes) I’ve included four overlapping views repeating some features.

Whatever hemisphere Mars presents, you should always be on the lookout for:

Specific named features that might be visible include the dark lava flows of Acidalia Planitia, Terra Meridiani, Terra Sabaea, and Syrtis Major. These are separated by the orange-brown sandy plains of Arabia Terra, Amazonis Planitia, Arcadia Planitia, and Elysium Planitia. The contrast between dark and light areas is largely a function of your telescope aperture and optical quality, but the difference is visible even through binoculars.

With a more powerful telescope you might be able to spot these features:

Even if you don’t have a telescope, try staying up late on July 26 to take a look. The 2020 Mars opposition will be almost as good, but after that there’s a string of unfavorable (distant) oppositions that lasts until 2033. Really, any night a week or two either side of opposition will provide a great view, so don’t worry if you get clouded out. I’ll be observing every night for a week centered on July 26, since that’s 2–3 weeks into our Arizona monsoon season. To all of us: Clear skies! (on Earth and Mars)

Q&A: Why Planets are Round
Monsoon Haboobs
HOME