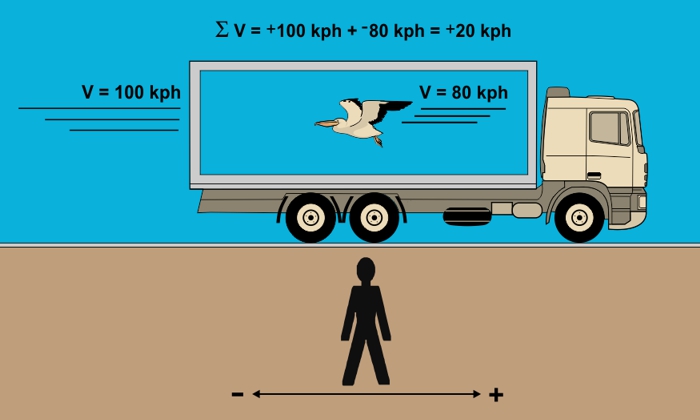 Question: I saw something the other day that just didn’t make any sense. There was a small group of birds flying past my house, some kind of pigeons I think. The strange thing was that they were flying backwards! I mean, their wings were all flapping like normal but they were moving backwards through the air. Was I hallucinating, or can birds really do this if they want to? — JG, San Francisco, CA

Answer: There’s only a few species that can truly fly backwards. The most familiar is the hummingbird. Other birds can “flutter” backwards momentarily, to avoid predators or catch prey, but their wings are built differently than those of a hummingbird and cannot sustain backward flight.

Hummingbirds don’t look anything like pigeons, so what you must have seen was a relative motion effect. Your location has a reputation for being windy, and I’m guessing it was a windy day. Here’s what I mean by relative velocity …

The main graphic shows a hypothetical truck with a transparent trailer, and a pelican inside flying from one end of the trailer to the other. Assume the trailer is perfectly sealed, so the bird feels “still air” in the interior. It flies with its usual speed of 80 kph to the back of the trailer just as the truck passes by at 100 kph. How does the bird appear to be moving to you, the observer, standing on the side of the road?

To combine motions like these we use a process called vector addition. We first choose positive and negative directions (the convention is positive to the right), then assign “+” or “–” to each motion depending on its direction — motion to the right is positive, motion to the left is negative. The combined motion is simply the arithmetic sum of the individual motions. And this method applies no matter how many things are moving.

The result, as you can see in the graphic, is a pelican moving at +20 kph (to the right) while it’s facing and flying to the left. Everything seems normal to the pelican (except maybe being confined to a trailer), but what you see appears contradictory. The bird’s motion relative to the trailer may be 80 kph to the left, but its motion relative to you is 20 kph to the right.

Now imagine away the truck and consider a wind blowing uniformly at 100 kph from left to right. What do you see the pelican doing this time? Answer: Exactly the same thing, only this time it can fly for as long as it wants without hitting the back of the trailer (or until it gets tired). That must be what you saw.

In practice, birds prefer staying grounded when the wind speed gets too high, but sometimes they get caught in a headwind they just can’t overcome. Here’s a great video attributed only to “Mari from Michigan” that shows vector addition in action:

Next Week in Sky Lights ⇒ Equinox as Seen from Orbit

Q&A: Your Car is a Faraday Cage
Equinox as Seen from Orbit
HOME