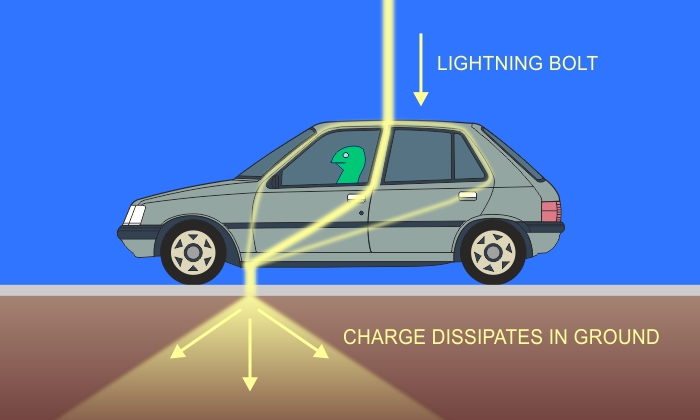 Question: Two nights ago I was car camping (literally sleeping in the back of my Subaru Forester) at 7500 feet, above Moab, Utah. A light rain grew to a storm, hail, lightening and thunder. As I lay wrapped in my sleeping bag at 2 or 3 am, the intensity of the storm was incredible. I was simultaneously thrilled and horrified to realize that I might be the highest point for a few hundred meters around.

I contemplated driving to a lower spot, but remembered from one your physics lectures in high school about the Faraday cage. Lightning lit up the sky repeatedly for the better part of an hour, but I kept saying to myself “My car is a Faraday cage” trusting your scientific advice.

There were no local strikes (a good 3-4 seconds between lightning and thunder) and I survived the night. But I remain curious, if my car had been hit, what would have happened to me inside? Would not that incredible surge of electricity charge the air, start a fire, blow out the tires, or worse? It seems unlikely that nothing would happen, no? — Kai Staats, Phoenix, AZ

Answer: An excellent question and one that I have not yet addressed in Sky Lights. The title provides the short answer: Yes, your car is a Faraday cage — less so on models with plastic or fiberglass bodies. The long answer is a bit more complex, as there would indeed be some peripheral effects.

For those not familiar with the concept of a Faraday cage here’s the basic idea: A Faraday cage is a hollow, electrically grounded, conducting shell. When an electrical current flows through that shell, the hollow interior will remain free of electric and magnetic fields. In the case of a lightning strike, if you are inside a metal vehicle (even if it has windows interrupting the conducting shell), the lightning will flow harmlessly around you and arc from the lowest metal part into the ground.

Contrary to popular belief, the rubber tires (which are very good insulators) have nothing to do with your safety. The 100,000 volt potential of an average lightning strike will easily sense the positive electric field inches below the bottom of the vehicle, ionize the intervening air, and arc the rest of the way to ground.

Proofs that a Faraday cage works usually involve invoking Gauss’s Law and doing some calculus, but we can make a convincing case by simply invoking symmetry. Take a look at the model below (click to enlarge): 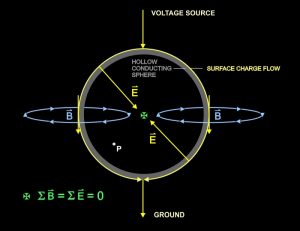 The model shows a 2D version of a hollow conducting sphere with perfect symmetry. Only two opposing electric field vectors (E) and two opposing magnetic field vectors (B) are shown. In reality, both would be emanating from all points on the sphere. You can see both fields are equal and opposite at the center, and so must cancel to zero. At points other than the center, like point P, it’s not so obvious why the fields cancel.

Consider point P. But both electric and magnetic forces decrease as the inverse-square distance from the source, so at point P you are closer to the forces emanating from the lower left part of the sphere, and farther from those emanating from the upper right. But (and here’s where we hedge on the calculus), there are more points on the sphere to the upper right of point P and fewer points on the sphere to its lower left. As it turns out:

This is a huge simplification of the “proof” why Faraday cages work, but distills it down to the essentials. Science almost always starts with the simplest models and adds complexities as needed to progress. I’m reminded of this apocryphal parody of the scientific process:

A dairy farmer wanted to increase the milk yield of his herd, so he hired a physicist as a consultant. After studying the problem the physicist responded: “First, we assume a spherical cow with homogeneous interior …”

That’s a joke only geeks will get. But it makes a good point about the limitations of simple models. Our model of the Faraday cage is about as simple as it can get. So let us now add some real-world complications.

There are several symmetry-breaking conditions when a real vehicle gets struck by real lightning. Even with an all-metal frame and body the electricity would take a wildly branching path with differing amounts of current in each (main graphic). One of those paths could be you — if parts of your body are in contact with metal components. Being in a sleeping bag makes that unlikely. Second, vehicle components outside the conducting shell will be subjected to an intense EMP (electromagnetic pulse) that can damage electronics. Third, since no metal is a perfect conductor, there will be some vehicle damage from ohmic heating (burning or melting).

Most paints and under-body coatings are insulators, but provide little protection from lightning. The current from a lightning strike is rapidly varying unidirectional DC that averages around 30,000 amps (30 kA). That’s a significant charge density with an energy exceeding particle beam weapons. Seeking ground, it would punch through whatever dielectric barrier the paint presents and be conducted along the outside skin of the metal on its way to ground. So yes, it would definitely “leave a mark” where it entered and exited the vehicle … probably vaporizing the paint and a thin layer of metal. 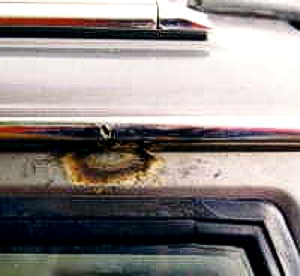 I’ll conclude with a link to one of many online videos showing vehicles hit by lightning. Here, a bank of Tesla coils generates an artificial lightning  bolt and zaps a passenger car. The real actions starts at 3:30 but the intro is well worth a listen: