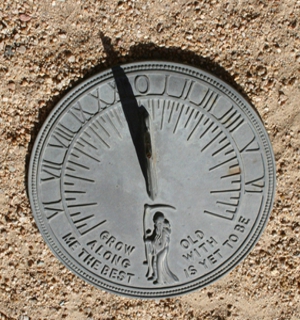 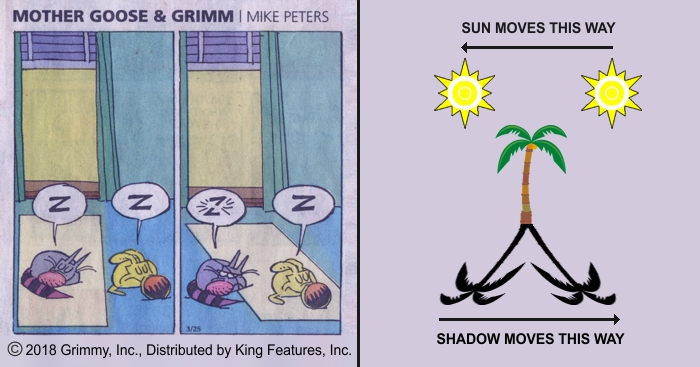 The comic above is reproduced in part for educational purposes under the Fair Use Act. Normally, what you see in Sky Lights is my own content, or public domain material from NASA or NOAA or NWS, but there are occasions where the work of others serves my purpose. If you’re curious to see how this comic ends, go here.

Mother Goose & Grimm, by Mike Peters, is a cartoon that parodies the fictional matriarch popularized in English folklore. As we all know, geese fly south for the winter and apparently Mother Goose is no exception. This cartoon shows a scene that must be taking place south of the equator.

In the first frame, Mother Goose’s cat Attila is basking in sunlight streaming through the window, and her dog Grimm is in the shade. Obviously, the Sun is moving from right to left. But the Sun always moves from east to west through the sky. Thus, right = east, and the window has a view to the north. Since sunlight is coming through a north window, the building must be located in the southern hemisphere.

For comparison, the video below is a time-lapse of a northern hemisphere sundial (located in my front yard). North is up. This video was just a crude first test of an intervalometer acquired specifically for time-lapse. There are 154 images taken at 1 minute intervals, compressed to 20 seconds of run time. That’s a speed up factor of 462X. You’ll see some (unplanned) shadows from tree branches sweep through the FOV, but most importantly, you’ll see the gnomon’s shadow move from west (left) to east (right) as the Sun moves from east to west through the sky.

So what’s the point of writing this analysis? Certainly not to criticize cartoonist Mike Peters, whose strip I most always enjoy. And Mother Goose has the freedom to winter in whatever hemisphere she chooses. Rather, I simply wanted to point out how there are often geometric clues in photos and videos that convey information about time and space — clues that typically go unnoticed. This cartoon provides an excellent example.

You can read an interesting story here about how an astronomical analysis helped Ansel Adams date one of his iconic black & white photos: Moonrise, Hernandez, New Mexico, 1941. I’ve used the process to identify those fake “sunrise” videos you often see on morning news shows — see my May 13, 2013 post. And my June 5, 2017 post takes a close look at another cartoon that shows an impossible location for the Moon.

I’ll admit that noticing details like this, especially in cartoons, is definitely geeky. But observations like these come naturally to anyone with a background in astronomy. Plus, this post allowed me to recycle an old video originally done simply as a test. And recycling is a good thing. ☺

Next Week in Sky Lights ⇒ Your Car is a Faraday Cage