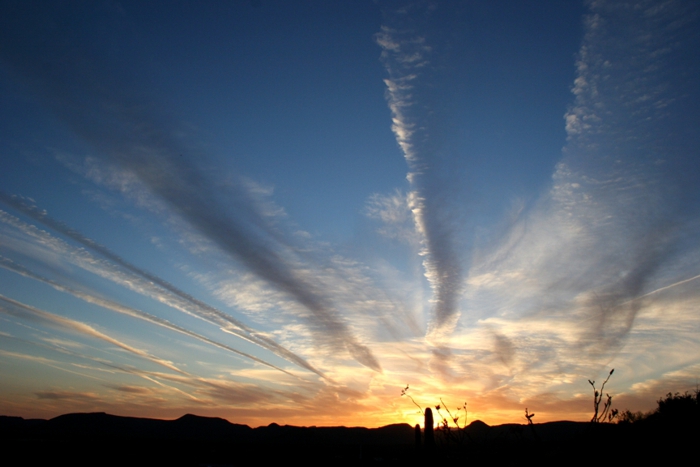 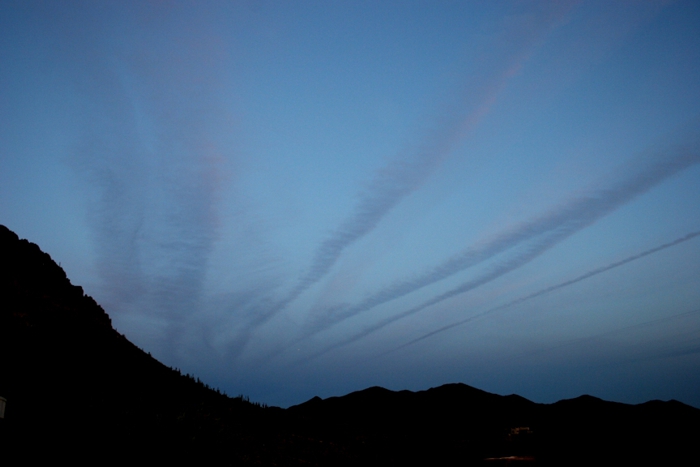 In my May 14, 2015 post I discussed the (relatively rare) cloud form called altostratus undulatus. There’s another type of cloud formation that looks similar but has different origins. I refer to what is commonly called a cloud street and technically known as horizontal convective rolls. Unlike altostratus undulatus, which form perpendicular to the prevailing wind, cloud streets form parallel to the wind. That link to EarthSky provides a nice explanation of the mechanism that forms cloud streets, but I want to focus more on the visual illusion captured in my two photos.

This was a display of almost a dozen cloud streets that took part in a colorful sunset. At least they did in the view to west (top image). Not so much in the view to the east (bottom image). It’s a classic display of cloud streets, with well-formed rows cleanly separated by blue sky. Notice how the rows seem to converge in the distance in both directions. But cloud streets are always parallel — that convergence is only an illusion.

Alas, I didn’t think to shoot a photo of how the rows looked directly overhead, but trust me when I say they looked nearly parallel (as you probably expected). This is all related to the visual perspective of vanishing points, which also explains why train tracks, or the sides of a road, seem to converge in the distance.

We’re all familiar with this illusion for terrestrial constructs, but we don’t often get a chance to see the same thing happen in the sky. Beyond cloud rows, I know of only one other example — crepuscular rays. Nature just doesn’t create much parallelity compared to human engineers. But that’s a good thing.