I’ve received several questions from readers about the Flat Earth Society and their “Round Earth Conspiracy.” You may have noticed some recent media coverage of this Flat Earther who’s been trying to get into space on a home-built steam-powered “rocket.” He wants to take photos to prove Earth is flat. Sigh …

First, you must understand that this whole “flat Earth” phenomenon is more about psychology and less about physics. Flat Earth Societies have been around in one form or another starting around the mid-20th century — about the same time we first started sending satellites and spacecraft into orbit. Flat Earthers contend that, well, Earth is flat and not round like the images seen from space. Hence the “Round Earth Conspiracy.”

When I first learned of the Flat Earth Society, I think back in high school, my initial impression was that the whole thing had to be a joke. After all, how could anyone believe Earth is flat after seeing images like the one below? Click to enlarge. 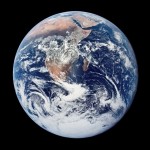 And yet Flat Earthers maintain images such as this are fabricated, or distorted by some force of nature, and do not show the truth. If you’re curious about how certain celestial or meteorological phenomena are “explained” by the Flat Earthers, visit their website and browse around. But don’t waste too much of your time on their pseudoscience.

Granted, some Flat Earthers are into it just for the “fun” but many of them really do believe in the Round Earth Conspiracy. The existence of strong counter-evidence is summarily dismissed. You’ll find die-hard believers in all conspiracy theories. Here’s a (short) list of some that often grab headlines:

Belief in a conspiracy theory satisfies several psychological needs, and is only loosely correlated with education and intelligence. You can read elsewhere how psychologists explain this behavior.

But of all extant conspiracy theories, the Round Earth Conspiracy is probably the most puzzling for me to fathom — and the least plausible. Fact is, the ancient Greeks knew Earth was round by the 3rd century BCE. That knowledge was based on personal experience, basic geometry, and scientific reasoning.

Pythagoras deduced the Moon must be round from observations of the day/night line as it went through its cycle of phases (top left image), and reasoned therefore Earth should also be round. Watch a full sequence of phases here and you’ll see what convinced Pythagoras. Anaxagoras concluded Earth was round from the shape of its shadow during lunar eclipses (top middle image). And Eratosthenes actually measured the circumference of Earth using the shadows of monuments located at the same longitude but different latitudes.

Sure, if you’re lucky enough to have been in space, you’ve experienced the strongest evidence that Earth is round. But only 536 fortunate individuals have made that journey at the time of this writing. That number will increase as private space tourism evolves. But until then, when you fly on a jet airliner, say over 10,000 m (33,000 ft) you can see the curvature of the Earth with your own eyes. You have to look for it by comparing the distant horizon to something flat — like the bottom edge of the window. If you do that, you will see curvature. What I’ve talked about in this post is also very strong evidence, and though I’ve never been into space, that evidence is sufficient to convince me Earth is indeed shaped like a sphere.

So it comes down to this: The level of evidence required to establish “proof” varies from one person to the next. That variation is caused by differences in education, scientific training, subjective bias, degree of paranoia, and other intangibles related to personal experience and upbringing. But for each person that “proof” is very real and able to affect behavior and beliefs. And that is why there’s a Flat Earth Society.