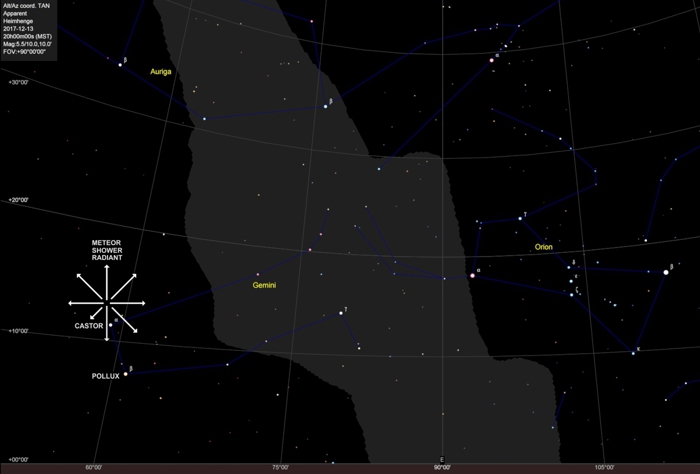 Most meteor showers disappoint observers, but the Geminids almost always provide a good show. Rates at the peak (this year Dec 13–14 06:30 UT) have been as high as 120 meteors/hour, but you’ll need dark skies to see the faint ones. From a light polluted city you’ll catch only the bright fireballs — maybe one every 30 minutes. However, astronomers say the Geminid rate is gradually increasing as Jupiter’s gravity drags the debris stream’s orbit closer to Earth. And this year, the late-rising Moon won’t interfere.

The debris stream that produces Geminid meteors originates from asteroid 3200 Phaethon, likely due to a collision with another object centuries ago. The Geminids were first observed/recorded in 1833, and they come around every year in early December. To see why that’s so, look at the debris orbit geometry in my Dec 10, 2012 post.

My sky map shows where to look for the Geminids. Note: The constellation Gemini will be farther south at more northerly latitudes, and vice versa. The time displayed is Dec 13, 20:00 MST = Dec 14, 03:00 UT. Meteors will appear to come from the radiant point just above Castor (the brightest star in Gemini), but could be seen anywhere in the sky. So be sure you have a clear view down to the horizon (especially to the east) with no tall buildings or other obstructions.

As the night progresses the radiant point will rise higher into the sky and place more meteors into your field of view. Most showers start out slowly and increase in rate with peak activity just before dawn — that’s when the Earth’s direction of motion through space is toward the zenith (directly overhead).

Note that, even though the meteors look like they are hitting us, it’s really Earth running into the (relatively motionless) Geminid debris stream. Earth’s speed through space is about 30 km/s (70,000 mph), and since we enter the debris stream approximately perpendicular to its motion that’s the speed with which debris enters our atmosphere. That high speed is why most meteors burn up on entry, and why all meteors ionize the air producing glowing trails. Surprisingly, most meteors you see in any shower are less than 1 cm in diameter. Much larger meteors, known as fireballs, are relatively rare but spectacular — the American Meteorological Society estimates you’ll see a fireball of magnitude -4 or brighter for every 20 hours of observing. Clear skies!

Next Week in Sky Lights ⇒ Christmas Past