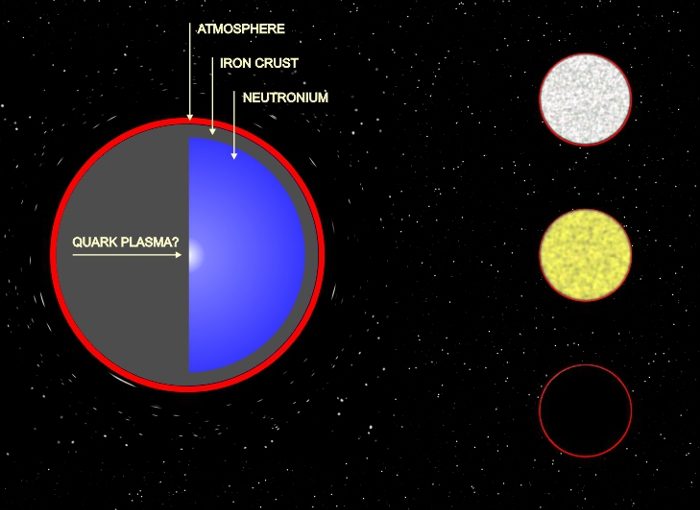 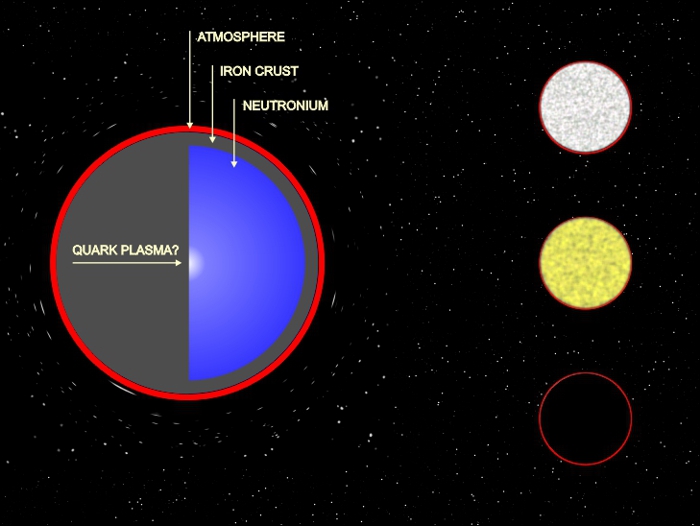 Following my Nov 13, 2017 post about LIGO’s detection of a neutron star collision, several readers asked for more information about neutron stars. If you want an extensive explanation, Wikipedia does a good job but gets a bit technical. I’ll try to keep things simple and avoid most of the math.

A neutron star is the collapsed core of a massive star many times the size of the Sun. Stars “burn” lighter atoms by fusing them into heavier atoms with the immense pressure in the star’s core. The process of fusion releases energy that heats the star to the point where it glows. It also creates an internal pressure that resists the inward pull of gravity, allowing the star to stabilize its size.

When a star runs out of fusion fuel (and all do at some point) this equilibrium state is disrupted. Internal pressure falls and gravity takes over. The star implodes. In a massive star, the implosion does several things …

The image below (left) shows a distant galaxy composed of maybe 100 billion stars shining with their combined light. The image on the right (taken with reduced exposure) shows one of those stars exploding in a supernova. Incredibly, the light from the supernova briefly outshines the light from the entire galaxy. Supernovae are one of the most violent events that occur in the universe.

The neutron star left behind by a supernova is incredibly dense — on the order of 1017 kg/m3. For comparison, Earth’s density is a mere 5 × 103 kg/m3. A single cubic centimeter of neutron star matter (about the size of a sugar cube) would weigh billions of tons on Earth. If it was placed on the Earth’s surface it would promptly sink to the core.

Neutron stars have a radius of only 5–10 km, but a total mass 2–3 times that of the Sun. Any more massive than that would continue collapsing all the way to a black hole. Gravity at their surface would be high enough to cause gravitational lensing effects (as shown in the top graphic). They also have extremely strong magnetic fields, on the order of 1012 times that of Earth. Neutron stars are born spinning at around 60 rps, and can increase that to 600 rps by accreting infalling matter. As the magnetic field rotates with the star, regular periodic bursts of electromagnetic energy are emitted — much like the sweeping beam from a lighthouse.

What they would look like depends on when you look. They are white hot when first created (1011–1012 K), but the neutrino burst carries away so much energy that (unless fed more matter) they cool to around 106 K in a few years. Over astronomical time, they continue cooling and eventually emit in infrared or lower frequencies at which time they’d appear “black” to the human eye. The three images in the top graphic show my “artist’s impression” of how these evolutionary stages might look, top to bottom, in the unlikely scenario of an isolated neutron star onto which no additional matter is falling. Gravitational lensing is not shown but would be observed in all cases.

There’s only a single confirmed photo of a neutron star, but because of its small size and great distance it appears as a mere point of light. Whatever gravitational lensing exists is not visible at this scale. Below is an HST image of neutron star RX-J185635-3754 located some 400 LY from Earth in the constellation Corona Australis. We know it’s a neutron star because no other known object this size could be hot enough to emit the observed x-rays. It’s about 28 km in diameter and has a temperature of around 1,200,000 K (so it’s had some time to “cool”). Image by Fred Walter of SUNY at Stoney Brook. Click to enlarge. 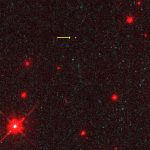 Truth be told, nobody really knows for sure what a neutron star would “look” like up close since there could well be unknown physics operating. We’re fairly sure there would be an iron crust (probably in a strange crystalline state we haven’t yet seen), and in the extreme gravity that crust would be very smooth and flat — any “mountains” would be mere millimeters in height. There would likely be some kind of tenuous “atmosphere” consisting of metal plasma. Both of these features would glow in accordance with standard blackbody emission spectra.

Inside that crust there is a strange form of matter called neutronium — essentially solid matter with no empty spaces, nothing but a huge nucleus of neutrons (with probably some stray protons and electrons scattering around). It’s important to contrast this with the normal matter we think of as “solid” here on Earth. Normal matter is made of atoms, and atoms are mostly empty space. Atoms are held together by electron clouds 100,000 times larger than the atom’s nucleus (which contains the bulk of the atom’s mass). So the proverbial “solid brick wall” is actually 99.9999999% empty space, but it feels solid because of those electron bonds.

At the very center of a neutron star, the neutrons themselves may break down into a quark plasma. Our models can’t make reliable predictions under these extreme conditions and don’t have much else to say.

There are over 1300 known neutron stars in our galaxy, and 100,000 predicted to exist. LIGO has added much to our understanding of these enigmatic objects, but more is sure to come.