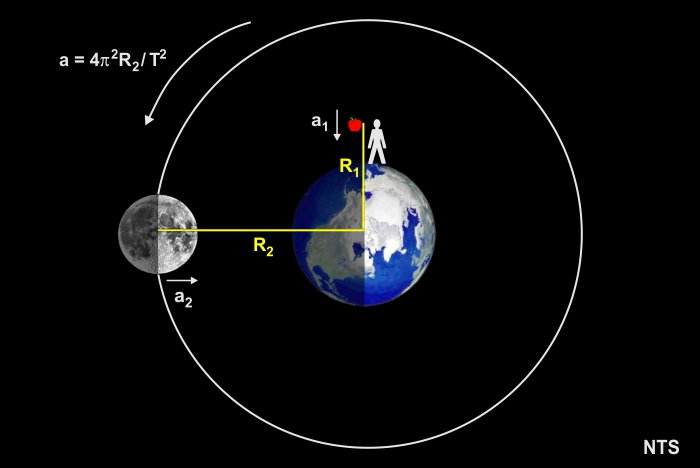 Question: We learned in school that Sir Isaac Newton discovered gravity, but that doesn’t make sense to me. Newton lived in the 17th century, and there were observant people around for a long time before then. How could anyone not notice that objects are attracted to the Earth? — WT, Seattle, WA

Answer: You are correct. In fact, the word “gravity” comes from the ancient Latin gravitatem meaning “weight,” “heaviness,” or “pressure.” So yes, the idea of gravity was familiar for ages before Newton, and he did not “discover” it. But this is one of those necessarily over-simplified “facts” taught in early grades before students are capable of understanding the whole story. The “fact” that Christopher Columbus discovered America is a similar over-simplification. Fair warning: To un-simplify Newton’s story, we’ll need to do some math.

Cambridge University, where Newton was studying, shut down from 1665–1667 when the Black Plague spread through Europe. During those years Newton returned to Woolsthorpe Manor, his family’s farm in Lincolnshire, where he pondered the question: What held the Moon in orbit around Earth? The Moon moved in a circular orbit, so according to his First Law of Motion there had to be a force acting on it, and that force had to be directed toward the Earth. But what force could that be?

There’s this apocryphal meme: Newton is sitting under an apple tree. He gets hit on the head by a falling apple. The Muse comes over him. He jumps up and exclaims “Eureka! I’ve discovered gravity.” No such event ever happened. According to the historical record, from the diary of Christopher Wren (a colleague of Newton’s), what probably happened was this …

Newton was sitting under an apple tree in the farm’s orchard, pondering the aforementioned question. While he was lost in thought, an apple dropped to the ground. It didn’t hit him on the head, but it did trigger this insight: Could the force that makes apples fall also be the force that’s acting on the Moon? As I stated earlier, people already had a word for what made apples (or anything else) fall to the ground — they called it “gravity.” What Newton now wondered was: Is gravity just an earthly phenomenon, or might it extend 385,000 km across space and also affect the Moon?

Newton had studied gravity extensively and knew how it accelerated falling objects, how it shaped the trajectory of a projectile, and how it affected a pendulum. He derived an equation showing how the oscillation period of a pendulum depended on the acceleration produced by gravity. That equation is:

where T = the period in seconds (s), L = the length of pendulum in meters (m), and a = the acceleration produced by gravity in meters per second-squared (m/s2). Note that we can express the “strength” of gravity in terms of how much acceleration it produces in a falling object (m/s2), or the force it exerts on a mass (N/kg). The units are equivalent since 1 N is defined as 1 kg·m/s2.

When Newton tested a pendulum at the top of a mountain he observed that it “ticked” more slowly than when at sea level. If T was a larger number, then a had to be smaller — gravity was weaker on the mountain’s summit. Data from mountains of different height suggested (but did not prove) that as you move away from Earth, gravity will weaken as the square of the distance from Earth’s center. Mathematically:

Newton knew the Moon was about 385,000 km from Earth, and he knew the size of the Earth, so to test his hypothesis he used the above equation to calculate what Earth’s 9.8 m/s2 gravity would be reduced to at the distance of the Moon:

Thus, if you dropped a rock from the top of a 385,000 km tall tower and watched it fall back to Earth, you’d observe it to accelerate very slowly. On Earth’s surface, a rock would fall the first meter of distance in t = √2d/a = 0.45 seconds. From the top of that tower it would take 27 seconds to fall the first meter. Of course, this prediction could not be tested directly, but there already existed an object “falling” from that distance — it’s called the Moon.

Newton had developed an equation for calculating the centripetal acceleration of an object moving in a circular path. Unlike “normal” acceleration, which is a rate of change of speed, centripetal acceleration is a rate of change of direction. One can nonetheless think of the Moon as “falling toward the Earth” (but moving fast enough horizontally to keep missing it). This is a seemingly paradoxical statement, but if you’re curious to see it resolved, my video lesson The Science of Orbits explains it clearly in a series of four animations with documentation.

So Newton calculated the observed (centripetal) acceleration of the Moon as:

When he saw the equality of those two calculated accelerations he was able to make several conclusions:

Newton’s theory of gravity (the Law of Universal Gravitation) can be expressed mathematically as:

where FG is the force of gravity, m1 and m2 are any two masses, and R is the distance between the centers of those masses. G is the universal gravitational constant, not known at the time of Newton, and first measured by Henry Cavendish in 1798. It’s value is now known to be 6.674×10−11 m3 kg–1 s−2.

And so, WT, you can see why in the early grades all this is often simplified to “Newton discovered gravity.” I don’t know how much of my explanation you could follow, but that’s the simplest I could make it. Most students wouldn’t be able to grasp the math until high school. And even then most wouldn’t see it outside of a class in physics or other advanced science. But you were perceptive to wonder about that “fact” and ask the question you did. Science is all about curiosity and asking the right questions. I wish you well in your studies.