LIGO made the headlines again in mid-October when they announced their detection of a collision, and subsequent merger, of two neutron stars on August 17, 2017. Unlike their previous detections of merging black holes (where the signal lasted mere seconds), this signal was drawn out to around 100 seconds. And with multiple detectors now online (Louisiana, Washington, Italy) they were able to triangulate the collision’s location in space — a feat not possible with a single detector.

As a result, over 70 telescopes worldwide (and in space) were able to react quickly and zoom in for a look at the event in optical, radio, X-ray, gamma-ray, infrared and ultraviolet wavelengths. This represents a new era of astronomy marked by what scientists call multimessenger astrophysics, where data can be obtained simultaneously in both the electromagnetic and gravitational spectrum. Dozens of research papers have already been published.

So what did we learn? Here’s the results of initial analyses of those multiple data streams: 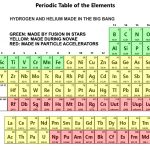 So we now know that at least some of the heavy elements are formed in neutron star collisions, and some are produced in supernovae, but we don’t know which process predominates. Interestingly, the data from this neutron star collision suggests that up to an “Earth mass” of gold could have been created.

Astronomers have coined a new term to describe this process — kilonova. The image below (courtesy of NASA’s Goddard Space Flight Center, CI Lab) shows an artist’s impression of what a kilonova might look like. Click to enlarge. Colliding neutron stars should produce a hot, dense, brilliant cloud of expanding debris containing elements heavier than iron. This debris expands into space and serves as raw materials for the creation of new stars and planets. So the gold in your ring may have come from a neutron star collision. How cool is that? 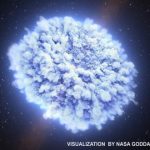 For centuries telescopes were limited to observing photons of visible light. In the 20th century their vision was extended over a broader range of the electromagnetic spectrum — from radio wavelength photons (on the long end) to gamma ray photons (on the short end). In the latter part of the last century we added neutrino detectors to the mix and confirmed our theory of supernovae by detecting the burst from SN-1987A. In the 21st century we added the LIGO network of gravitational wave detectors that, in February 2016, confirmed Einstein’s prediction of the existence of gravitational waves and, in August 2017, made the astounding discoveries discussed in this post.

Every time we open a new “window” into the cosmos we’re surprised by the things we find. The era of multimessenger astronomy has only begun. The next window might be provided by “dark matter” detectors like the LUX (Large Underground Xenon) experiment. LUX has yet to detect any dark matter particles, but work is ongoing and its sensitivity is increasing.

Next Week in Sky Lights ⇒ Discovery of Gravity