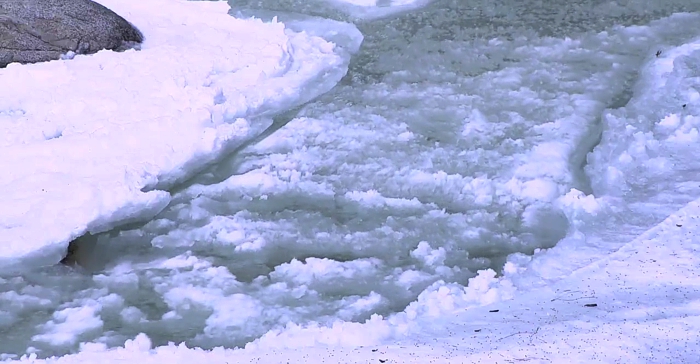 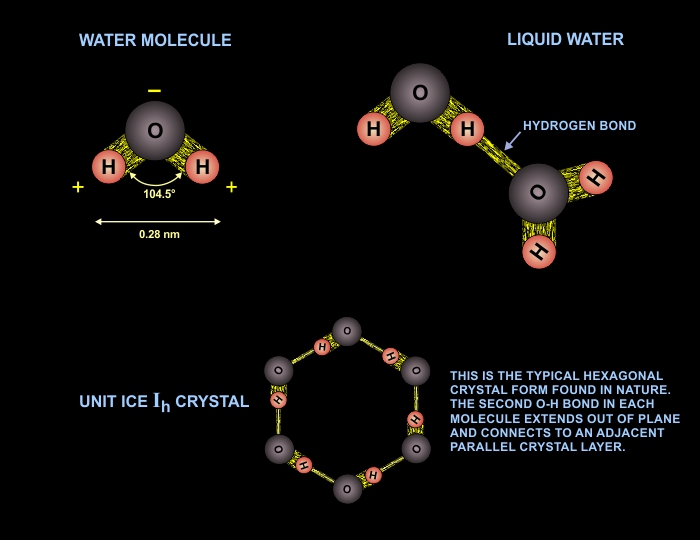 Question: My cabin is on Birch Lake, and I’ve lived there through several cycles of seasons, but last year the lake froze really late. On average it freezes over shortly before Thanksgiving. In 2016 it took till early December. It was quite windy last Fall and I saw waves from 1–2 feet on this small (180 acre) lake. I wonder if the constant waves might have impeded the water’s freezing? My theory is that the usual stratification of water is disrupted by wave turbulence, bringing warmer deep water to the surface. What do you think? — TJR, Harshaw, Wisconsin

Answer: What you hypothesized is essentially correct: The stratification that causes the surface to freeze first is disrupted by wave action that mixes water layers. The depth to which a wave affects the water is more than most would suspect, with the water molecules being dragged in a circular “orbit” that facilitates layer mixing. Here’s a nice animation of that process done by a Dutch scientist known only as Kraaiennest (Crowsnest)

There’s another freeze-delaying mechanism in moving water. Water flowing in a river experiences drag forces when it encounters obstructions, channel edges, and irregularities on the river bed. This forms gyres (areas of swirling water) which disrupt stratification by mixing water from various depths. Perhaps surprisingly, currents can even form in closed lakes when the water is perturbed by asymmetric winds, rains, or solar heating.

Still, even with good mixing, as Winter advances, and temperatures continue to drop, ice crystals must begin to form. In calm water, those crystals will grow into a continuous flat and smooth layer of ice — perfect for skating and sometimes transparent. In moving water, individual ice crystals will clump in amorphous globs forming a “slush” that can move and flow — it’s in that “twilight zone” between true solid ice and freely flowing liquid. The technical name for this state of water is intermediate ice (aka frazil ice).

Quick chemistry lesson: The top graphic shows the geometry of an individual water molecule. Oxygen has a high electron affinity, so when it bonds with two hydrogen atoms the electrons that comprise the bond spend more time near the oxygen atom. This makes the water molecule polarized, with a net negative charge around the oxygen and a net positive charge around both hydrogens. When two water molecules approach each other, the negative end of one molecule can bond with the positive end of another (top right in graphic). This is called a hydrogen bond, one of many specific examples of Van der Waal forces.

In liquid water these hydrogen bonds are continuously making and breaking as the water molecules jostle about. In frozen water, the bonds are permanent and typically form hexagonal structures (bottom in graphic). As the temperature of liquid water drops, the bonds last longer and longer allowing small (irregular) crystals to form and create a type of “slush” midway between the liquid state and the solid state.

Intermediate ice is no longer a “liquid” because some molecules have permanently bonded, and it’s not quite “ice” because it can still move and flow in bulk. They say -48 °C (-55 °F) is the lowest it can go — any colder and it must solidify. Here’s a photo of intermediate ice on Yosemite Creek, courtesy of the National Park Service. Click to enlarge. 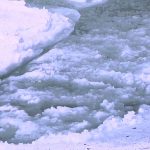 Some may claim the water motion itself “produces heat” because thermodynamics tells us (correctly) that heat is the motion of molecules. But this confuses macroscopic and microscopic motion. For simplicity, consider the monatomic gas helium. The absolute temperature T of that gas (measured in kelvins) can be calculated as:

where K is Boltzmann’s constant, m is the mass of a gas particle, and VAVE is the average particle speed between particle collisions. Working backward for a sample of helium at room temperature (273 K) we find the particle speed will be on the order of 1200 m/s (2700 mph). This is why, even on a windy day, the air temperature will be determined primarily by the microscopic particle speed and not the (macroscopic) air speed.

A similar argument can be made for flowing water. The calculation is a bit more complex since water is a triatomic molecule and can absorb energy in vibration and rotation modes as well as translation. But the average speed of water molecules at room temperature is around 600 m/s (1300 mph), so even a fast current adds little to the average particle speed. By the time that water drops to the freezing point, molecular speeds are still around 500 m/s. Thus, waves or currents in water will not add a significant amount of heat.

To put microscopic and macroscopic motion into perspective, we can calculate how much heat would be added to water going over Niagara Falls — a drop of 50 m (167 feet). If we ignore cooling due to evaporation (which can be significant), the energy added to the water by falling would raise its temperature a mere 0.5 °C.

Of course, for a given lake there can be additional factors operating to delay the freeze. Incoming water from springs will warm the lake, and water darkened by silt or organics will better absorb sunlight. But ambient air temperature is the main determinant of when your lake will freeze. The graph below, from the Wisconsin State Climatology Office, shows average monthly temperatures for your area. Click to enlarge. 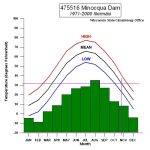 You can see that (over the time span from 1971–2000) your average mean temperature dropped below freezing around the end of the first week in November. Your assessment of the average freeze being “shortly before Thanksgiving” (say, start of the third week in November) indicates there may be a long-term trend (2000–2017) toward later freeze dates — especially given last year’s “early December” freeze. I’ll let you draw your own conclusions about global warming.