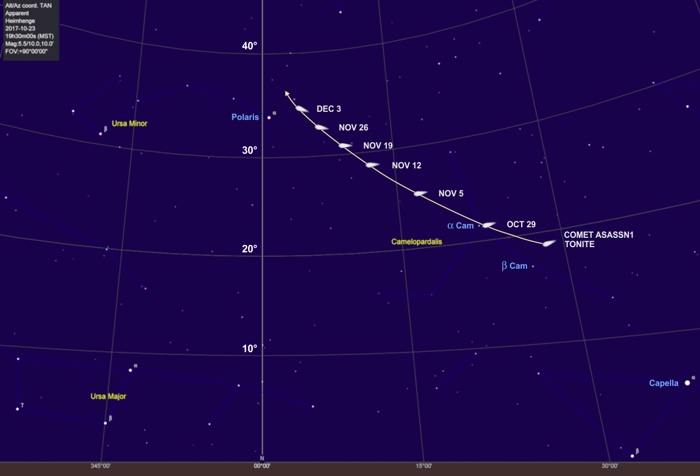 Comet ASASSN1 will be in prime viewing position during November of 2017. It is circumpolar for northern hemisphere observers and thus visible all night. ASASSN1  won’t be the brightest comet — estimates say around magnitude +8.0 at its peak in mid–late October. That’s too faint for the naked eye, but not for binoculars or small telescopes. Here’s a link to an image from September 22, captured by H. Mikuz at the Črni Vrh Observatory in Slovenia: http://www.cobs.si/images/latest.jpg

The comet is named for the All Sky Automated Survey for SuperNovae (ASAS-SN). First detected on July 19, 2017, its closest approach to Earth was October 18 at a distance of 0.72 AU (107,684,594 km). Peak brightness estimates are uncertain, but ASASSN1 surprised us a few weeks ago by brightening by a factor of 100. Perihelion was October 14 at a distance of 1.5 AU from the Sun — that’s just outside the orbit of Mars, so solar heating and subsequent tail formation are now waning.

If you’re still waiting to see your first comet, and don’t mind it being only a “fuzzball,” then ASASSN1 is a good target. Because it’s circumpolar you can see it from wherever you are — no need to travel to distant locations or stay up till late hours of the night. Pick an evening with no Moon, wait till at least 2 hours after sunset, turn off all outside lights, bring your binoculars (at minimum), and give your eyes 30 minutes to dark adapt. Then go comet hunting.

The chart above (click to enlarge) shows the path of the comet from tonite through early December. The sky is as seen from Arizona (latitude 34°) on October 23 at 19:30 MST (12:30 UT). At higher latitudes the comet’s elevation will be higher, at lower latitudes vice versa. The circumpolar sky rotates counter-clockwise around Polaris at 15 degrees/hour, so the path orientation (about 4 o’clock in this chart) will change over time. The best strategy is to “star hop” between the few prominent stars in the area as you scan. Here’s the names and magnitudes (M) of four stars (shown on the chart) that can serve as hopping points:

If you waited till the time suggested, bright Capella should be easily visible. Interpolate between Capella and Polaris (also an easy target) based on your observing date, then start scanning. Mount your binoculars on a tripod if possible. Unsteady, shaking binoculars will blur this subtle target.

Even light clouds will obscure the comet’s diffuse coma, so good luck with the weather. But the nice thing about comets (unlike meteors) is how they hang in the sky for extended periods. If you do get clouded out just try again the next night. ASASSN1 will be patiently waiting for you.

Next Week in Sky Lights ⇒ How Moving Water Freezes