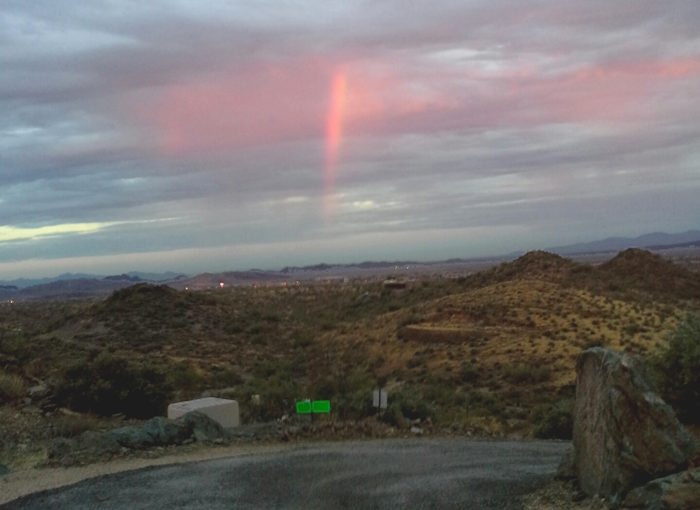 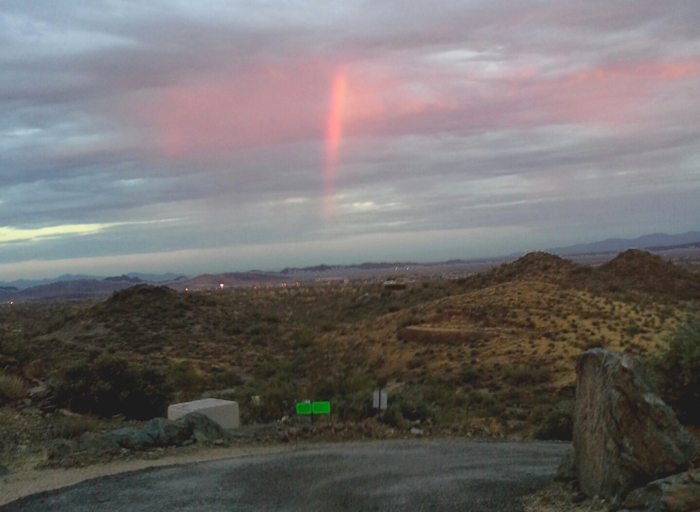 Question: On my way to work a few days ago, around 5:30 am, I saw this strange vertical cloud. It was distinctly reddish, like some of the background clouds. The Sun was just rising and pretty much behind me when I took this photo with my smartphone. The view is toward the southwest. Might that be a fire tornado? — SH, New River, AZ

Answer: Interesting photo, thanks. No, it’s definitely not a fire tornado. Those are formed by strong updrafts over large fires. You can see several good photos here. With the information you provided, I can tell you it’s also not a sun pillar since the Sun would have to be directly below (or above) it. It looks like a sun pillar but the geometry just isn’t right.

The reddish color is easy to explain. This photo was taken very close to sunrise when there’s a lot more red light scattering around the atmosphere — a result of the same Rayleigh scattering that colors our beautiful Arizona sunsets.

The vertical morphology is definitely unusual. There are a few meteorological conditions that can generate vertical clouds, but most involve severe weather. Your photo shows a relatively stable layer of stratus clouds.

Sometimes a contrail can be oriented in such a way that it looks “vertical” even though it’s really (nearly) horizontal. But this cloud is too low to be a contrail. You can see that it’s superimposed over the more-distant background clouds.

A common dust devil can form vertical structures like this. Even after it’s dissipated it can leave a column of dust suspended in the air for up to an hour. But this is the wrong time of day for a dust devil. They most often form later in the day after the Sun has heated the ground. And all the ground I can see in your photo is still in the shade of the mountains behind you.

So by the process of elimination, here’s my best guess: What you saw was a plume of smoke from a fire, possibly a vehicle fire on I-17 (which runs through that field of view). I checked the ADOT records and couldn’t find anything reported on the date of your photo, but not all vehicle fires cause interstate closures and show up online. And although the plume of smoke from a vehicle fire is initially dark gray, as it dissipates it could easily pick up (and scatter) the reddish light from a sunrise. The smoke could also have come from a small brush fire or (illegal) trash burn. I found no nearby house fires in the records for that date.

The process of elimination is often used in science to arrive at an explanation. As Sherlock Holmes was fond of saying: When you have eliminated the impossible, whatever remains, however improbable, must be the truth. I’m sure I’ve covered all of the reasonable possibilities here, and I’m 99% certain it was a dissipating smoke plume. What was burning, however, remains a mystery. Thanks for sharing that unusual photo.

Next Week in Sky Lights ⇒ Greatest Elongation of Venus