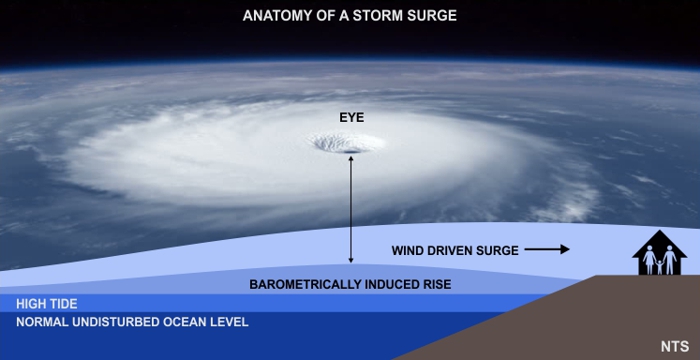 You’ve probably heard the term storm surge in recent news reports. Everyone knows it has something to do with high water levels, but there’s several components to a storm surge, each of which merits explanation. The graphic above shows those components (not to scale). My “stacking order” is purely arbitrary since all components are combined during a real storm.

1. Normal Undisturbed Ocean Level: This is the average level of the ocean over multiple cycles of high and low tides. Most ports have tide gauges deployed for continuous real-time measurement. This is how mean sea level (MSL) is defined for that location. Of note: The distance of MSL from the center of Earth depends on location because the planet is not a perfect sphere. Rather, it’s shape is best described as an oblate spheroid with a polar radius of 6537 km and an equatorial radius of 6378 km — a 1% difference. As a result, geocentric MSL can vary by ±2 m over its Earth’s surface (as compared to a perfect sphere).

2. High Tide: Tides driven by the Moon are totally independent of the weather. Out in the deep ocean, far away from land, lunar tides are only around ±0.6 m. But near a coast, where the tidal surge can be “focused” by local topography, the variation will be greater. In the Bay of Fundy (between New Brunswick and Nova Scotia) it can vary by as much as ±8 m. The global average for coastal areas is about ±1 m. Of course, the tide can add or subtract from a storm surge but we show it above as an added component.

3. Barometrically Induced Rise: Pressure in the eye of a hurricane is significantly lower than the normal atmospheric pressure of 1013 mb (14.7 psi). Your garden variety low pressure system might be around 1000 mb. But in a category 1 hurricane it will drop to 980 mb. When Hurricane Irma was at its strongest the pressure was around 920 mb. Pressure in the core of a tornado can drop even lower — few reliable measurements have been made, but estimates place it around 100–200 mb. Winds are driven by pressure differences, so the lower the pressure the faster the winds. But an additional effect of low pressure is the rise in ocean level under the eye due to higher pressures outside the storm — like on a playground seesaw, the water under the eye is pushed upward by greater pressure pushing down on water outside the storm. The ocean level will rise about 1 cm per millibar of pressure drop and comprise about 5% of the total surge. For Hurricane Irma that rise was about 1 m.

Hurricane winds circulate in a counter-clockwise direction (in the northern hemisphere). If those winds are directed toward shore they can push water inland. The ocean literally slants upward toward the land. The table below shows nominal storm surges expected for each hurricane category. Watch an excellent NOAA animation of storm surge evolution here (requires SWF).

Waves are not shown in the graphic but contribute additional water height and damaging forces to structures. They ride on top of the total storm surge (MSL + tide + barometric rise + wind driven surge) and can rise up to 30 m in a category 5 storm. Much of the structural damage in a hurricane results from the impact of waves, though the media (usually safely inland) tends to focus more on wind and flooding.

Considering that a storm surge can extend for hundreds of kilometers along a coast, that’s a lot of “extra” water. Of course, the surge has the entire ocean to draw from, but in practice it takes some time for the level to equalize on a global scale — flowing water has inertia and experiences friction, so it takes some time to move. As a result, the bulk of the water in the surge initially comes from the local environs. This means some areas near the storm can see a drop in sea level, especially in bays where the wind is blowing away from shore. It’s a surprising phenomenon not seen in every storm, but when it happens it usually makes the news. The images below show a bay on Long Island (in the Bahamas) that experienced this “negative surge” as Hurricane Irma passed by. Both photos were taken from the same place on the beach to show the dramatic “draining” of the ocean.

The effect is similar to what often occurs before a tsunami, and equally dangerous. When the water comes back, and it always does, it happens quickly — within minutes. It can catch curious observers off guard. And like a tsunami, it can overshoot the shoreline before sloshing back to equilibrium. Be careful out there.